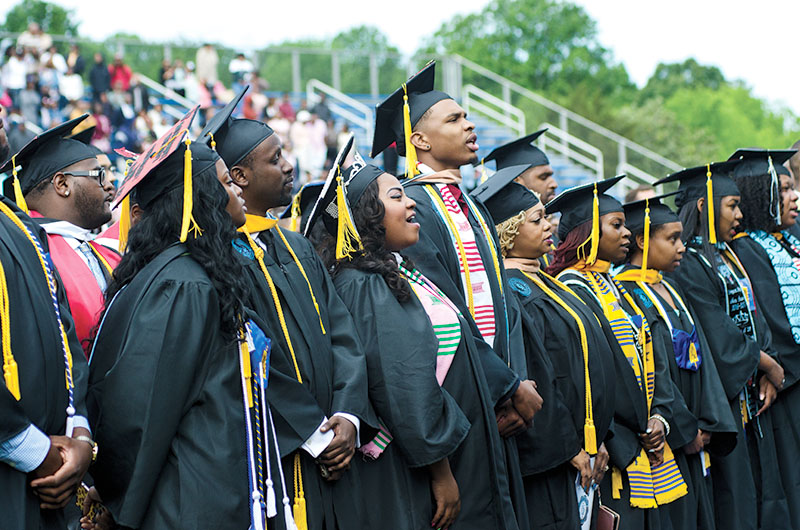 SALISBURY — Maggie Maxwell straightened her cap and adjusted her pink and green stole with just over an hour before she closed one chapter as a senior liberal studies major at Livingstone College and began a new chapter as she walked across the stage to accept her diploma.

Maxwell, a native of Florida, is one of just over 150 students who graduated during Saturday’s commencement exercise. She graduated with a degree in liberal studies with a concentration in theater and political science. She hopes to pursue acting, but first Maxwell will attend graduate school at the Savannah College of Art and Design in September.

“It’s been a journey. I’ve been discovering myself as a person,” she said.

Maxwell chose Livingstone primarily because her mother, grandmother, cousins and an aunt attended. She’s been attending homecoming events with them for years.

She said she used her time at the college to create an outlet for herself and took her college experience and “adapted to my needs and wants.” Maxwell was able to graduate a year early by taking on extra classes and working hard. She graduated with honors.

What she’ll miss most about Livingstone College is the people and friends she made while there as well as the “nurturing environment.”

“The teachers are there for you. They don’t want you to fail. My teachers knew my name,” she declared.

She donned a tiara nestled in the front of her cap, she said because since she was a little girl she always thought she was a princess and so she had to have one during graduation. Her mother spent months designing her pink and green cap that included elements of her sorority, Alpha Kappa Alpha Sorority Inc.

Danny Robinson’s time at Livingstone College almost didn’t happen after he was told within his first semester that he was ineligible to play football. Robinson, from California, said despite that snag in the beginning he knew getting an education was important and he persevered and graduated with honors.

He and three other fellow graduates Leo Manzo as well as twins Jabrel and Jamar Anderson have created a business opportunity that they plan to implement at Livingstone College through its Bridge program The Bridge program works with deserving students who may not meet admissions standards, but can prove themselves through the six-week summer program. Although the men grew up in different areas including New York and Atlanta, they all had the same story that they persevered and kept their focus to achieve success.

Robinson said they just want to give back to others in the same manner that others fed into them. They hope to expand the program nationally.

Commencement speaker Suzan Johnson Cook delivered a message that was a mix of a Sunday morning sermon and good advice from a friend.

Cook is the first African American and woman to hold the position of U.S. Ambassador for International Religious Freedom. She was nominated by Secretary of State Hillary Clinton and appointed by President Barack Obama. Cook has held the position of chaplain to the New York City Police Department for 21 years and is the first woman to serve in that role.

She is owner of Charisma Speakers, a cross cultural communications firm and professional speakers bureau. She provides keynote speakers, training and global experts around the world for corporations, colleges/universities, conventions and conferences.

Cook spoke from the topic “Going Forward is the Only Way to Go,” and used the passage of scripture from Exodus chapters 13 and 14 to show how in the bible God parted the Red Sea so that Moses could lead the Israelites through. She said going back was not an option for Moses because the Egyptian army was behind them just like going back is not an option for the graduates. She compared the journey of the Israelites to experiences of the graduates.

She also told the graduates about the Israelites’ 40-year journey through the wilderness.

“God took them the long way on purpose because they needed to go forward to get what God had for them,” she said.

“When God takes you the long way all he’s getting you is seasoned for the journey.”

She also encouraged them to celebrate what God has done in their lives.

Students received a special message from Valedictorian Kenya Glover, who had to miss her final semester because of an illness. President Jimmy Jenkins spoke of visiting Glover in the hospital and her main concern was getting well enough to finish school. Glover, who is also valedictorian and Student Government Association president, was advised by her doctor to not attend, but she was able to greet the students via a recorded message. Her mother and father accepted her diploma on her behalf.

She said the support and prayers of her fellow students were what got her through the ordeal.

“Stay woke in a society when most people are asleep. Keep God first in your life,” Glover said.

Many students counted it a blessing to be in attendance because some would’ve been unable to graduate because of money owed to the school. Senior Bishop George Battle Jr., who is the chairman of the board of trustees, and his wife for the past six months gave $200,000 via scholarships that were used to aid seniors in paying off their final bills with the college.