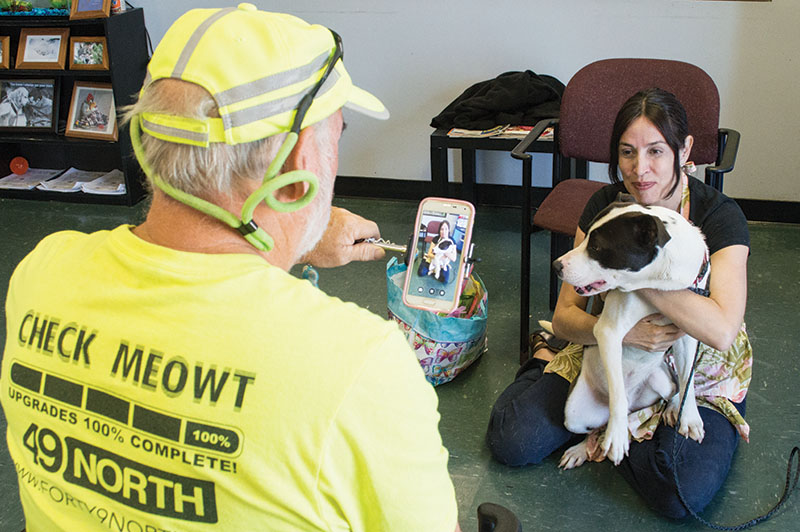 Janelle "Ella" Gingrich-Caudle holds a dog and speaks to a camera while volunteering at the Rowan County Animal Shelter. Gincrich-Caudle regularly volunteers at the shelter by posting interactive videos with shelter animals. Josh Bergeron / Salisbury Post

SALISBURY — After some initial hesitance about the idea, the Rowan County Animal Shelter now hails the benefits that its volunteer program contributes to daily operations.

“You know, those things are the community involvement that helps make the shelter a better service to the community,” Pendergrass said. “These people are here because they care about animals, but they are really serving the community.”

Last month, the Rowan County Board of Commissioners even passed a resolution proclaiming April 23-29 “Animal Shelter Volunteer Appreciation Week.” The quality of public service is greatly enhanced by the unselfish dedication of volunteers that help shelter staff do their work, the resolution stated.

When an Animal Shelter Task Force proposed the idea in 2015, shelter staff questioned the benefits of allowing volunteers. Members of the task force said volunteers would ensure the shelter’s adoption rate continues improving. Shelter staff read letters from other animal shelters during the meeting, which raised concerns about volunteers not working pre-determined schedules, the need for supervision of volunteers and the potential for allegations of misconduct.

“Being a shelter, it’s just going to be this way. We have things written about us on Facebook that are not exactly positive, but people can’t find out the truth until they come see for themselves,” Pendergrass said. “Of all the people that have come to volunteer, I have yet to see one that didn’t walk away saying ‘this is different than I thought it was.’”

Janet McKenzie, who aims to volunteer every day, said all animal shelters should allow volunteers. McKenzie said volunteers help shelter staff with a variety of tasks.

“I love the people here and I’m willing to help out and do whatever they need me to do,” she said. “When they get busy, I can do things that opens up (staff members) to do more serious stuff. With a few of the people who volunteer with the cats, they’ll volunteer to clean up the cages and that helps (staff members) out.”

Before the Rowan County Animal Shelter allowed volunteers, McKenzie said she would wait at the facility and pull dogs set to be euthanized for rescue groups.

“This county has really opened their doors fully to volunteers,” she said.

She comes in twice per week, films videos with animals nearing their date for euthanization and posts the videos to her organization’s Facebook page — the Good Samaritan Animal Society.

Gingrich-Caudle said one of her favorite parts of volunteering is seeing animals adopted.

She previously volunteered her time at the Cabarrus County Animal Shelter, but she said the facility no longer allows her to record videos with animals.

For the Rowan County Animal Shelter, volunteers such as McKenzie and Gingrich-Caudle are an addition to the network of animal advocates who work to ensure animals are adopted. The most well-known group is a Facebook page known as Friends of the Rowan County Shelter Animals, which started in 2012. Now, the page has nearly 27,000 “likes” on Facebook. The start of the Facebook page corresponds with a downward trend in the number of animals euthanized.

Candace Honeycutt Terry, who started the Facebook page, said there’s a vast network rescue groups who help adopt dogs and cats from the Rowan County Animal Shelter. At the time Terry started the page, she recalled seeing the same picture of a “weenie dog” on the shelter’s website for months.

She was part of a group who advocated for volunteers to work inside of the shelter. As the volunteer program continues, Terry says it will further improve the quality of the animal shelter.

“It’s only going to make things better, and hopefully make things easier on the shelter staff,” she said.

Jennifer Grubb, the volunteer coordinator, said there’s no limit on the number of people that can volunteer at the Rowan County Animal Shelter. She said tasks could range from walking dogs to cleaning cat kennels.

People interested in becoming a volunteer can submit an application, by visiting www.rowancountync.gov/GOVERNMENT/Departments/AnimalShelter,  scrolling down to a section about the shelter volunteer program and clicking on the link to the application and emailing the form to bob.pendergrass@rowancountync.gov. Alternatively, the form can be faxed to 704-638-3398 or mailed to the Rowan County Animal Shelter at 1465 Julian Rd, Salisbury, N.C. 28146.