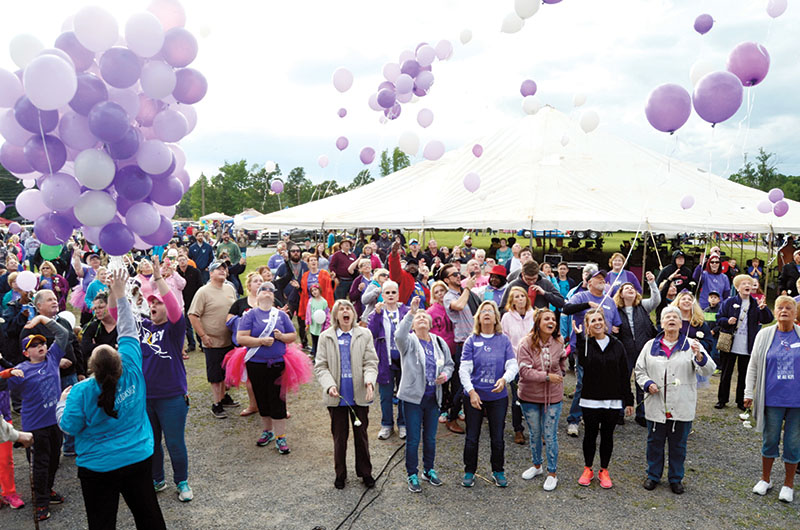 Cancer survivors along with their caregivers, friends and family release purple and white balloons during the Relay for Life event as a way to signify the journey they endured together. Shavonne Walker/Salisbury Post

SALISBURY — Michael Parks was given 12 months to live, but he defied the doctors’ expectations following a colon cancer diagnosis in November 2013. He’s grateful to his wife, Nita, for scheduling a much-needed check-up with his doctor, but most importantly he is grateful to God for his life.

He went in for a colonoscopy with the expectation that he’d get the exam and return home, but instead he received news that he had colon cancer. After the diagnosis, Parks was scheduled for a series of doctor appointments and other exams. He told the oncologist to be honest and tell him everything so he’d know what to pray about.

“He said, ‘I give you 12 months,’ ” Parks said after having made a survivor’s lap at this year’s Relay for Life event.

He had six months of chemotherapy and a procedure. A year after the diagnosis, he was diagnosed with renal cancer and doctors found 25 tumors in Parks’ liver. He had laser therapy. Parks said he felt as if the tumors, which are still there, were like a scar to remind him of what God has done.

“Anything that threatens to take you away from those you love is a cancer,” he said.

He credits his wife’s insistence on getting a check up with helping to save his life. He believes the biggest reason people don’t get check ups is because of cost. He even thought about postponing a couple of appointments and procedures following his initial diagnosis.

Parks said he’s appreciative of life and treats everything as if it’s his last day.

The Relay for Life event was held at the Rowan County Fairgrounds and despite light droplets of rain, many still attended. There were survivors, family, friends and other caregivers there to show support.

Pattie Livengood-Beaver and her husband Walter held a large picture of her parents Margaret and Don Livengood and were overcome with emotion as they walked a lap in Margaret’s memory. Margaret died three and a half months after being diagnosed with cancer in August and her husband of 59 years died a few hours later on the same day.

“My mom was the strongest person I know. She never complained. She fought it with everything she had. If she could do that then it’s the least I could do,” Pattie said of the walk.

Beth Kane is a 24-year cancer survivor. She found a lump on the back of her knee and was diagnosed with lymphosarcoma. It was a low-grade cancer, Kane said, which didn’t require chemotherapy, but it did require 32 days of radiation.

The radiation and other subsequent procedures left a large hole in the back of her knee, which then required IV therapy and later skin grafts.

Kane reflected on her experiences and knew that “God was with me.”

She was 32 years old when she discovered it and after treatment it never returned. This is her fifth year participating in Relay for Life events. She also walked in honor of her mother, Anna MacDonald, who died shortly after her breast cancer diagnosis.

The cancer spread to her mother’s back, intestines and hips. She lived four years with it, which was two years beyond what doctors predicted.

Felicia Charles, who is with the Cancer Action Network and also on the event leadership committee, said the survivor’s lap around the track is a memorable moment for them.

“This signifies a journey. The balloon release signifies that you are not alone,” Charles said.

Her mother had cancer and she lost her grandmother this year to lung, stomach and brain cancer. She was diagnosed and died three days later.