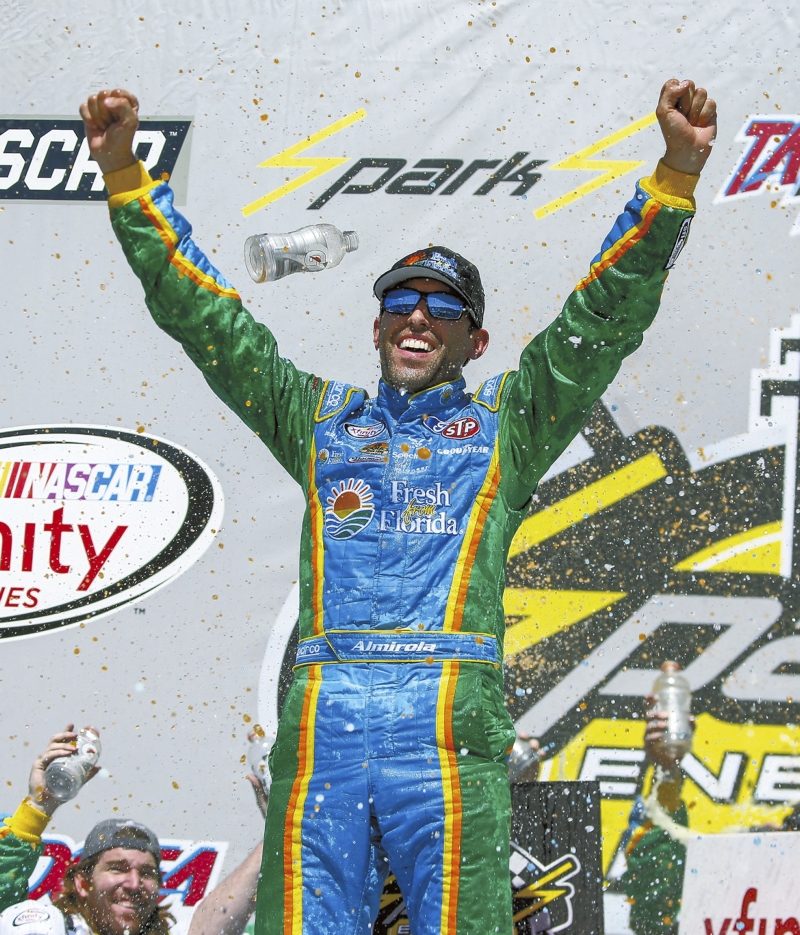 TALLADEGA, Ala. (AP) — Aric Almirola earned the third Xfinity Series victory of his career Saturday by holding off a hard-charging pack in the closing laps at Talladega Superspeedway.

He knew just minutes into practice at Talladega that he had a Ford capable of winning.

“We ran about 10 laps in practice and I said, ‘Put it on jack stands.  We’re ready to go.  This thing is fast,’” Almirola said.

The car was indeed fast, and Almirola used a fuel-only stop to earn his first series victory since Daytona last year.

A caution for debris set up a restart with 11 laps remaining, and they were frantic at the front of the field. Justin Allgaier, Joey Logano, Elliott Sadler and Almirola all made plays for the Saturday win. Allgaier gave up the lead to Logano on a Logano crossover move, but Almirola got by him.

Almirola had to drive using his rearview mirror to fend off attacks for the lead from every lane. Sadler gave it one last push at the finish line, but Almirola held on for the victory in a Ford.

“I made a mistake inside the car coming to the white that probably cost me a shot at winning the race. I should know better,” Sadler said after his second-place finish.

“Man we were so close, aggravating,” Logano said. “The draft is so crazy and different. The runs come so quick and it’s hard to block them. You have to physically block them with your car and it’s really tight.”

“When you are the lead car, you are trying to do everything you can to hold everyone off,” Allgaier said.

JR Motorsports retained its hold at the top of the Xfinity Series standings as Sadler, Allgaier and William Byron are 1-2-3 for Dale Earnhardt Jr.’s team.

All eyes are on NASCAR’s favorite son as he races Sunday at Talladega Superspeedway, a place where he’s adored by the fans and expected to win every time he gets in his Chevrolet.

The crowd roared Saturday in qualifying when he shot to the top of the board, but it was short-lived. Ricky Stenhouse Jr., the last driver to qualify, immediately bumped Earnhardt to second. Stenhouse turned a lap at 191.547 mph to put the Roush Fenway Ford on the pole.

Earnhardt leads all active drivers at Talladega with six wins, but has never started from the pole. His lap was 190.780 mph in a Chevrolet.

“I’m pretty happy,” Earnhardt said. “Great lap by Stenhouse and the Roush crew. Would have liked that pole.”

“It will be nice to lead the field to the green here,” Stenhouse said. “It’s a cool way to start the weekend.”

Earnhardt announced last week he’s retiring at the end of the season, and this first of two stops at Talladega has him nostalgic for one of his favorite race tracks.

“Thrilled with our car, good speed,” said Earnhardt, who didn’t seem to be joking when he noted a pole would make him eligible to run the preseason “Clash” at Daytona.

“Probably could have sat down and talked to Rick (Hendrick) about running the Clash or something, but let’s see if we can’t try to get another one later on this year.”

There’s some notion that Sunday is a must-win race for Earnhardt, because the start to his final season has not been great. He’s also won only one race at a track other than Daytona or Talladega since 2014. So with his playoff chances dwindling, a victory would be a big boost to this goodbye tour.

“We have had a dry spell, haven’t won a lot of races,” Earnhardt admitted. “I think if I go in thinking this is a must-win, then I’m probably going to get in there and make a few mistakes.”

Earnhardt is 24th in the standings behind five finishes of 30th or worse this season. But he’s got a strong mindset for Sunday, in which he knows he needs to be strongest and smartest in the third and final segment.

“Every move and decision, every slight turn of the wheel has to be the right decision,” he said.

Earnhardt used his 2014 victory in the Daytona 500 as the example for how he needs to race at Talladega. In that event, he had an aggressive late battle for position with Greg Biffle to earn the victory.

“The only way I could keep myself from sliding backward was to run like one inch off the door and squeeze him against the wall,” Earnhardt said of his . “It really kind of killed both of our cars. But at least he wasn’t passing me. It was a bit outside of character for me to drive so much like a jerk, I guess, but that’s what you’re got to do. You’ve got to keep on cracking the whip, keep telling yourself, ‘This is what has to happen, this is how I have to do this to make this work if I want to win.’”

REST OF THE FIELD:

It was a strong day for the engines built by Doug Yates. His power landed four cars in the top six, including both Roush drivers in Stenhouse and Trevor Bayne (5th). Brad Keselowski for Team Penske qualified third and Kevin Harvick was sixth for Stewart-Haas Racing.

Wedged in with Earnhardt and the Fords was Matt Kenseth, who qualified his Joe Gibbs Racing Toyota in fourth. Daniel Suarez, his teammate, was seventh.

“All the Fords look fast and it doesn’t really matter where you start here because it’s such a chaotic race and it’s the luck of the draw on how you finish,” said Bayne. “We know we’ve got a fast car and everybody knows we’ve got a fast car, so maybe they’ll be willing to work with us.”