One for the books: Jane Welch dedicated career to the importance of reading 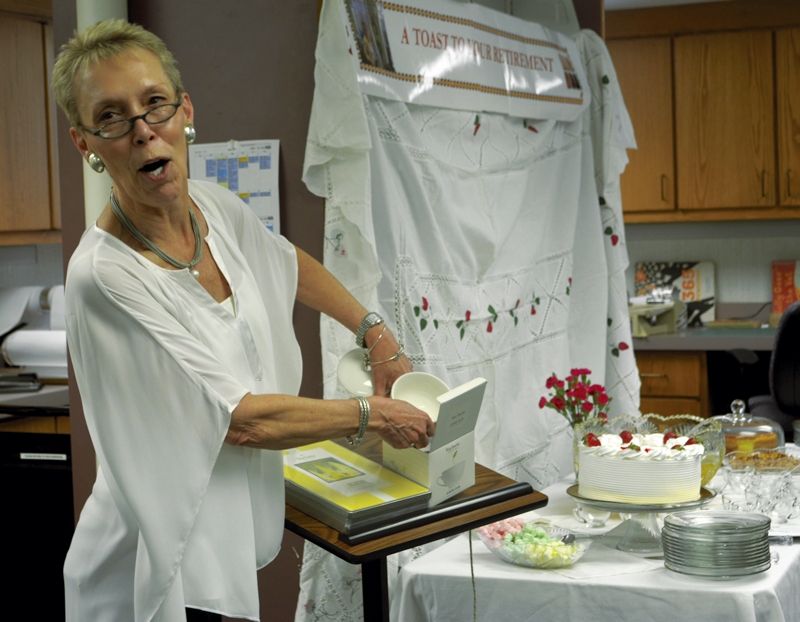 As part of her gifts, Jane Welch received tea and a tea cup from the staff at Rowan Public Library.

When Jane Welch was in her mid-20s, she met a man who would change the trajectory of her career.

Jane was a brand-new teacher, sent to a high poverty area in her native South Carolina. She taught remedial math to students in grades 4-6. On the advice of a principal, she called every one of her students’ parents.

“What has my child done now?” was the common question.

Jane’s answer: “Oh, your child is a delight. I’m just calling to introduce myself. If there’s something your student doesn’t understand about math, just send me note.”

The response: “No teacher has ever called and told me nice things about my child.”

Then one day, a father came to her classroom, dressed in clothes that were clean but worn. He carried a stack of textbooks under one arm, in multiple subjects.

“There ain’t nobody at my house who can read these books,” he told Jane.

Through the years, Jane made it her mission to put books in the hands of children. When their son, Chas, attended First Presbyterian Church’s preschool, she taught there. Through taking him to story time at Rowan Public Library, she met Marian Lytle, who asked her to come to the library to work for a program that later became Smart Start Rowan.

Jane worked with underserved children and their families, visiting homes and childcare facilities throughout the county. She was putting books into the hands of children.

She told herself, “This is where I’m supposed to be.”

She joined Vicki Rufty in 2006 on the bookmobile for the Stories to Go program. Once more, she was putting books into the hands of children. Her formal title with the library was outreach program supervisor. She remained true to her goal.

“Without expecting it or directing it, Jane persuaded me to be better,” Vicki said. “When she’s holding the bar up really high it just makes you want to reach. She always went the extra mile. She’s the most fair supervisor I’ve ever had.”

Others echoed Vicki’s words at Jane’s retirement celebration early Friday morning at the library — a low-key event per her wishes.

“Jane’s been my cheerleader and my support,” said Melissa Oleen, library manager. “She’s not only a pillar in the library, she’s a pillar out in the community.”

“She’s the most professional person I’ve ever worked with,” said Robert Jones, children’s librarian. “There hasn’t been a day when you haven’t come in with a smile. Now you get to be with your family. Enjoy your grandchildren, enjoy your family, and enjoy your life.”

Jane and her husband, Charles, had one son, Chas. He now lives in Nashville with his wife, Mandy, and their two children, Cate, 7, and Charlie, 5. Jane’s mother, Martha “Mot” Hayes remains in Greenville, S.C. She sent her famous pound cake to her library friends one last time on Friday. Jane’s sister, Martha Brown, lives at Daniel Island. Jane and Charles had a house there for years. The love of her life died in 2005. Jane was diagnosed with breast cancer in 2010. Through it all, her library family was by her side.

When she decided to retire, Jane put her Salisbury house on the market, and move to Daniel Island. Her home sold in less than 24 hours, so when she left the library Friday, her car was packed, and she was South Carolina-bound.

She sounded a lot like Margaret Wise Brown leaving her house for the last time that morning.

Then she had to chuckle at herself.

Those gathered got a good chuckle from the banner hanging over the refreshment table, “A toast to your retirement.”

“I’m not known for my cooking ability,” Jane noted.

“Isn’t that so dear?” Jane asked, showing it off to their fellow co-workers.

A tea lover, Jane received some special tea, along with a darling teacup with its own lid. Her co-workers also gave her a monogrammed journal filled with good wishes and lots of pictures of her over the years at library story time.

“Oooh, where did that sweater come from?” Jane asked, turning the pages. Looking at another photo, she wondered where a brightly colored dress had gotten to. It might come in handy in Charleston, after all.

If you know Jane, then you won’t be surprised to know that she does have some plans, post-retirement.

After she gets settled on Daniel Island, and after a few home renovations are complete, she’s going to get in touch with Rep. Rita Allison, a family friend, to find out how she can volunteer with First Step. The program South Carolina is modeled after North Carolina’s Smart Start program. She’s also going to visit the little library on Daniel Island, and ask if she can volunteer during story time.

Surrounded by her co-workers, Jane told the story of the father she met so long ago.

“I never realized the impact that gentleman in South Carolina had on me until now,” she said later in the morning. “If we can put books into the hands of children, and reach children at a young age and help them develop a love of books, then that’s what really matters.

“This was where I was supposed to be.”