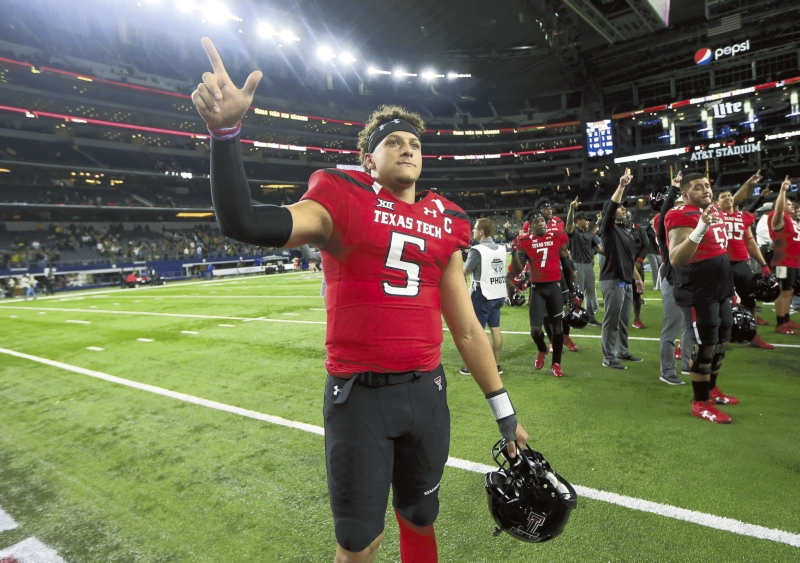 FILE - In this Nov. 25, 2016, file photo, Texas Tech quarterback Patrick Mahomes II celebrates after Tech defeated Baylor in an NCAA college football game in Arlington, Texas. When Kansas City Chiefs general manager John Dorsey and coach Andy Reid boldly jumped up 17 spots to select Mahomes with the 10th overall pick last week, they did so gambling that he will be their franchise quarterback long into the future. (AP Photo/Ron Jenkins, File)

KANSAS CITY, Mo. (AP) — The last time the Kansas City Chiefs selected a quarterback in the first round of the NFL draft, Andy Reid was an offensive line coach at a school that no longer has football, general manager John Dorsey was still in college and Alex Smith was a year away from being born.

The wait for weary fans finally came to an end last week.

During a stunning first night of the draft, the Chiefs packaged two first-round picks and a third-round selection to move up 17 spots and grab Patrick Mahomes II. In doing so, Reid and Dorsey staked their futures on a quarterback from a school that has only produced flameouts, yet one whose arm strength and intangibles could allow him to succeed Smith under center as soon as the 2018 season.

“What you’re doing is building the future of the organization. I think that’s important,” Dorsey explained. “And we did that. At the end of this thing, I really think he’s going to be really good.”

Mahomes had better be great.

Otherwise, it might be another 34 years before the Chiefs take a first-round quarterback.

It wasn’t just that Blackledge was a failure after the franchise took him with the seventh overall pick in the 1983 draft. The fact that he only won 13 games in four seasons hardly helped.

It was a series of circumstances that led to such a bizarre draft drought.

The years that Kansas City harbored a high draft pick, there were more pressing needs than the most crucial position on the field. The years the Chiefs desperately needed a quarterback, they chose late and the top talent was off the board.

The Chiefs chose to address quarterback in other ways, primarily through trades. There was the high-profile deal with the 49ers for Joe Montana, and the swap with the Rams for Trent Green, and the far less successful trade with the Patriots for Matt Cassel several years ago.

Even when Reid and Dorsey arrived in Kansas City, one of the first things they did was send a pair of second-round picks to San Francisco to get Smith, a move critical to shoring up the position.

The Chiefs would occasionally take a stab at a late-round quarterback in the draft, but none of them worked out. And the names of Mike Elkins, Brodie Croyle and, more recently, Ricky Stanzi, Aaron Murray and Kevin Hogan only left Chiefs fans shaking their heads in frustration.

Until last Thursday night, when Reid and Dorsey made the boldest move of their tenures.

As the trade with Buffalo flashed on the screen, thousands of fans who packed inside their practice facility for a watch party drew their breath. And when Mahomes was announced as their pick, a roar nearly shook the building — a cheer of joy, hope and relief all at once.

It hardly mattered that Reid quickly tried to temper expectations, pointing out that Mahomes has much to learn. The simple fact that Kansas City had drafted a quarterback in the first round was enough.

“It was pretty tense in there for a little bit because there were a couple other teams trying to get him,” Reid said of the Chiefs’ draft room. “There was a bit of tension, but everyone was excited when it happened. It wasn’t one of those deals where half the room was in on him and half wasn’t. Everybody was in on this kid and liked him, so everyone was pretty fired up.”

There is plenty of reason for optimism. Mahomes put up record-setting numbers at pass-happy Texas Tech, throwing for more than 5,000 yards last season. And his uncanny ability to make plays when everything is breaking down has already drawn comparisons to another Reid protege: Brett Favre.

Reid is considered a master at developing quarterbacks, while Mahomes will have at least one season and perhaps more to learn under Smith, who quickly reached out to his heir apparent after the draft.

Unlike so many other top prospects, Mahomes won’t be thrown into the fire on Day 1.

“I think it’s a great situation for this kid to come into,” Reid said. “There’s going to be a day when Alex isn’t playing anymore. You have to have someone who can step in and go. We feel like with this kid — with some growth — he’ll be in a position to do that. That’s what is real.”

Also real are expectations, even if they are set aside for a couple years.

Mahomes will always be the first quarterback the Chiefs have taken in the first round in more than three decades, and the franchise paid a price to get him. If he’s unable to deliver, it could set the team back years — perhaps even begin a whole new streak of quarterback droughts.

Reid and Dorsey aren’t worried about it, though. And more importantly, neither is Mahomes, who said he understands and embraces the reality that awaits him in Kansas City.

“I’m just going to come in and work my tail off,” he said, confidently. “Whenever the opportunity comes and whenever it happens, I’m going to be ready to play.”