Down to the last out, Brett Gardner lifts Yankees past the Cubs 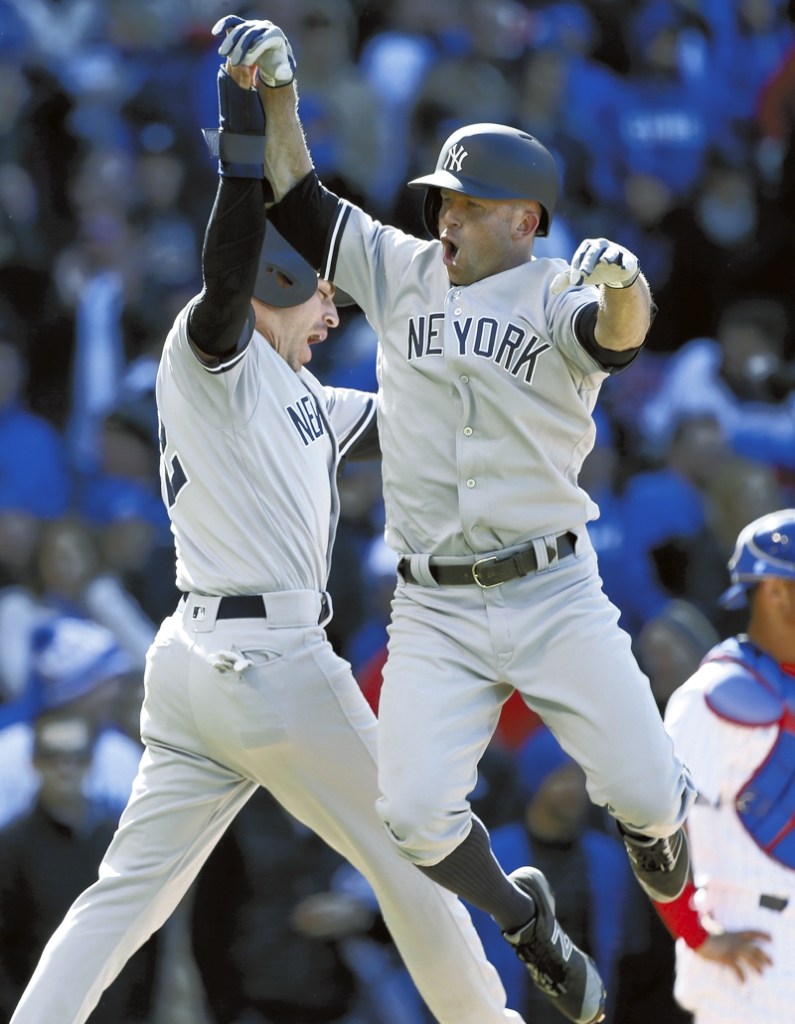 CHICAGO (AP) — Brett Gardner lined a slider from Hector Rondon into the right-field bleachers with two outs in the ninth inning for a three-run homer that lifted the New York Yankees over the World Series champion Chicago Cubs 3-2 in a dramatic series opener Friday.

Home runs by Kris Bryant in the first and Kyle Schwarber in the sixth off Michael Pineda staked the Cubs to a 2-0 lead on a 45-degree afternoon with the wind blowing in.

Chase Headley singled with one out in the ninth off Rondon (0-1), pitching after Wade Davis appeared in the previous three games. Jacoby Ellsbury, in his first appearance since injuring an elbow Monday, pinch hit with two outs and walked after a 2-1 pitch at the knees was called a ball by umpire Ryan Blakney.

Gardner fouled off a pair of 1-2 fastballs, took a ball and on his seventh pitch of the at-bat — the 29th to Gardner in the game — he hit his fifth home run of the season, all in the last six games.

Aroldis Chapman, who received his World Series ring from the Cubs before the game, had to pitch out of trouble in the bottom half for his seventh save.

Wilmer Flores drew a four-pitch walk from Kyle Barraclough with the bases loaded and two outs to force in the go-ahead run. New York opened the inning with six straight hits off normally reliable reliever Brad Ziegler (1-2), who did not retire a batter.

The Mets trailed 7-1 after Miami scored six times with two outs in the fourth, highlighted by two-run doubles from Justin Bour and Miguel Rojas.

BALTIMORE (AP) — Gabriel Ynoa pitched six sharp innings after starter Wade Miley was forced out of the game by the impact of two line drives, and Baltimore got a home run from Chris Davis in a victory over Chicago.

Miley left after being drilled by successive batters. First, he was struck in the left wrist by a shot off the bat of Jose Abreu. Two pitches later, Avisail Garcia ripped a comebacker that hit Miley in the left thigh and knocked him off his feet.

Strasburg (3-1) allowed five hits, struck out five and walked four, leaving after 119 pitches and failing to go seven innings for the first time this season. Strasburg homered in the second on a 93 mph fastball from Nick Pivetta (0-2) for a 2-0 lead.

Ryan Zimmeman hit his 12th homer, doubled and raised his average to .433 with a three-hit game.

KANSAS CITY, Mo. (AP) — Jason Hammel allowed three hits over six innings for his first win with Kansas City and Eric Hosmer sent a two-run homer splashing into the fountains behind the fence in right-center field.

Hammel (1-3) struck out six and walked two, ending a six-start winless streak dating to Sept. 19, when he defeated Cincinnati for the Chicago Cubs.

Rookie Scott Alexander, Joakim Soria and Kevin Herrera combined for one-hit relief. Herrera allowed Edwin Encarnacion’s two-out double in the ninth before retiring Jose Ramirez on a groundout for his fourth save in five chances.

Morales hit a two-run shot during the seventh inning and completed his 18th career multihomer game with a three-run drive off Jumbo Diaz (0-2) in a five-run eighth that put Toronto ahead 8-4.

Aaron Loup (1-0) limited the Rays to one run after Tampa Bay loaded the bases with no outs in the seventh.