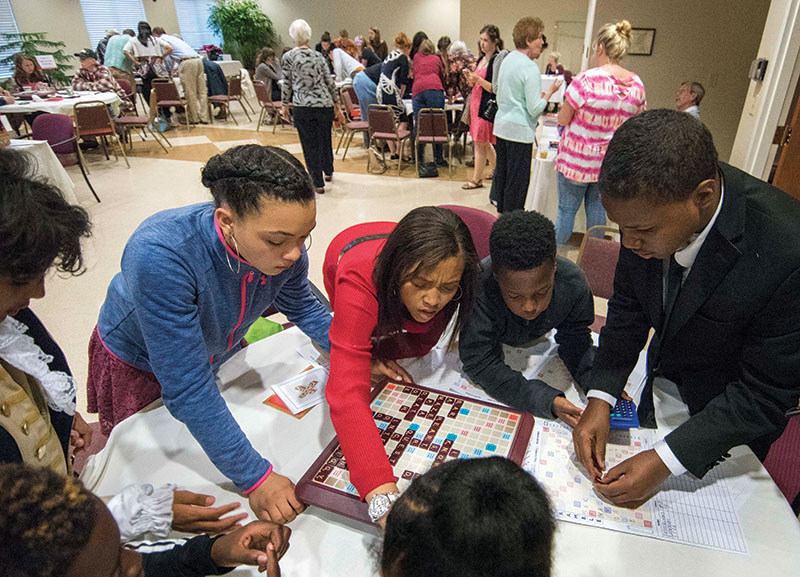 To many, the words filling the boards at the Rowan Literacy Council’s 14th Annual Scrabble Scramble looked like alphabet soup.

One board, controlled by the Friends of Rowan Public Library, contained such gems as “demythologizing” and “galvanization.” Players from Trinity Oaks filled their board with words like “zyzzyvas,” “adze,” and “zizz.”

These words haven’t landed in place from educated guesses — they each represent strategic moves from participating teams.

Campbell was seated at a table sponsored by Ting Hao Chinese Restaurant. He played on one of seven teams participating in Friday night’s Scramble event, held at Trinity Oaks Senior Living Community.

This team component is what makes the Scramble different from standard Scrabble matches. As each round begins, teams have 100 tiles, a Scrabble board, a starting word and a time limit. In times of desperation, participants can pay extra for a necessary tile or a peek in dictionary.

Players seemed willing to take this financial plunge: The Scrabble Scramble represents the Literacy Council’s only fundraiser. Last year, proceeds from the event and the agency’s portion of United Way funding helped provide literacy training for 93 adult students and 20 through their youth literacy initiative.

New to the event this year was a special presentation from Angelia Fleming’s 7th Grade AIG Language Arts Class from North Rowan Middle School. The students performed a skit called “Literacy & Community,” which they wrote entirely by themselves.

“Don’t you want us to have a brighter future? … All we need is you,” said Oriana Reed during their performance. “Students will help the next generation learn to read until literacy grows global like wildfire.”

“It’s our only fundraiser and it’s our 14th year,” Scott said. “A lot of our tutors are here. … We’ve also gotten new tutors from this group.”

Scrabble Scramble offered participants a chance to give back and have fun on a Friday night, as well as a chance for friendly-yet-fierce competition.

The Trinity Oaks table came out ready to reign supreme: they purchased 24 Zs at the very beginning of the first round.

“This is my first year doing this,” said Debbie Chirico, one of the event’s volunteers. “I’ve never seen Scrabble played this way and I think, ‘how fun is that?'”

The winning team represents those with the highest cumulative total at the end of the night. It’s a time-consuming process: judges look up questionable words on the teams’ boards, using old-fashioned dictionaries to check for legitimacy.

Players took these scoring sessions as an opportunity to breathe and fellowship with one another. The Scramble is, after all, about so much more than winner’s status: it’s about helping people read.

“It sounds so little sometimes because you take for granted the things that you read,” Scott said. “But if you take one day and write down everything you’ve read that day, you’ll realize how difficult it is for somebody … to hide the fact they can’t read.”