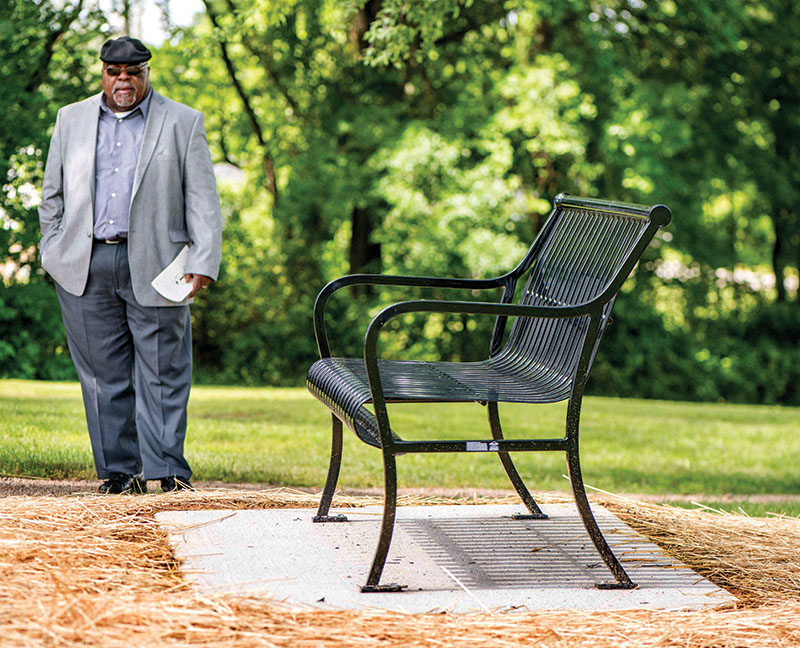 JON C. LAKEY / SALISBURY POST Reverend Clarence Marlin walks up to the bench for a look. Members of the community took part in a dedication ceremony to dedicate a bench on a path to Lincoln School in memory of Floyd A. Kerr, who was widely known as "Peewee". The Bench will be one of the few that will be located in the Dixonville Cemetery and is part of the Dixonville-Lincoln Memorial Project. Friday, May 5, 2017, in Salisbury, N.C.

SALISBURY — It’s just a bench, you might say, but it seems so perfectly positioned under the biggest tree in Dixonville Cemetery. You can picture Floyd Kerr sitting there, holding court.

Kerr, who everybody knew as “Peewee,” fashioned a 45-year career with the city of Salisbury’s Parks and Recreation Department and became known to several generations of children.

He was a role model, mentor and advisor for many of Salisbury’s young athletes, including basketball standouts Bobby Jackson, Fred Campbell, Bryan Withers and Donald Jenkins.

After a period of declining health, Kerr died last October. The Dixonville-Lincoln Memorial Project Task Force, of which he was a member, dedicated the cemetery bench in his memory Friday morning.

As the dedication crowd headed over to First Calvary Baptist Church for a reception, the Rev. Clarence Marlin, broke off on the path by himself to visit Peewee’s bench.

The men had attended J.C. Price High School together. “Me and Floyd go way back,” he said. “We had some good times.”

After school, the men would renew their friendship when both were city employees. Marlin used to be a supervisor with the solid waste department. At the reception later, Marlin gave the ending prayer, but before he started he talked about the legacy people such as Kerr have left behind.

“The work that we do means something, especially when we do good work,” Marlin said.

Other benches in the cemetery, the first city-owned African-American cemetery in Salisbury, are set aside for Fred M. Evans and William Peoples, whose recent deaths also represent great losses to the task force and Salisbury as a whole.

Headed by Emily Perry, the task force has divided its Dixonville-Lincoln Memorial Project into three phases and is raising funds for the first.

“Dixonville” refers to the cemetery of the former community with the same name, and “Lincoln” represents Lincoln School, where many older residents of Salisbury still have fond memories of attending during the days of segregation.

Phase I of the project will be a Dixonville Cemetery Memorial Walk; phase II, an interpretive walk; and phase III, a restoration of the long abandoned Lincoln School.

But much of Friday’s discussion centered on remembering Kerr, who was 66 at his death. A 1968 graduate of J.C. Price High School, several members of his class attended the bench dedication.

Darryl Alexander said Kerr liked to say his full name — Floyd Alexander Kerr III — because he wanted to emphasize the “Alexander” part of his family as much as the Kerr side. He was a highly visible participant at reunions of both families, Darryl said.

Kerr was called “Peewee” because he was born three months prematurely, and the name stuck with him for the rest of his life.

As a boy, Alexander looked forward to visiting Peewee and his brother, James. The Kerrs lived at the end of Green Street on some “creek-front property.” For boys, it was a great place to explore Town Creek and the woods.

The Kerrs had even dammed the creek to provide a swimming hole.

“It really was like going to a little resort,” Alexander said. “… James and Peewee were like brothers to me.’

Though Floyd Kerr was a good athlete, Alexander said, he didn’t play basketball at Price High because he didn’t like walking from the West End to the East End at night after practice or games.

People probably didn’t realize it, but Floyd Kerr was a talented draftsman who attended Rowan Technical College for a time, pursuing that line of work. He came by the talent naturally. His father was a contractor who always had a pencil in his ear.

Alexander said his cousin “was the greatest judge of character I’ve ever known,” and with the recreation department, Peewee treated everyone else’s kids as though they were his own.

“He did a whole lot for the young people of this community,” Alexander said.

Russell remembered how busy her father always was with workshops and running the gymnasium and pool. She recalled fondly how he helped her get ready for summer camp by braiding her hair and swearing her to secrecy about it.

Russell said her father told her countless stories about growing up in Dixonville — the swimming pool, the gas stations, the corner stores and how everyone got along and helped each other.

“We miss him so much,” Russell said.

She then referred back to the bench.

“I’m going to have my special time up there with Peewee,” she said.

Friday just happened to be his birthday.