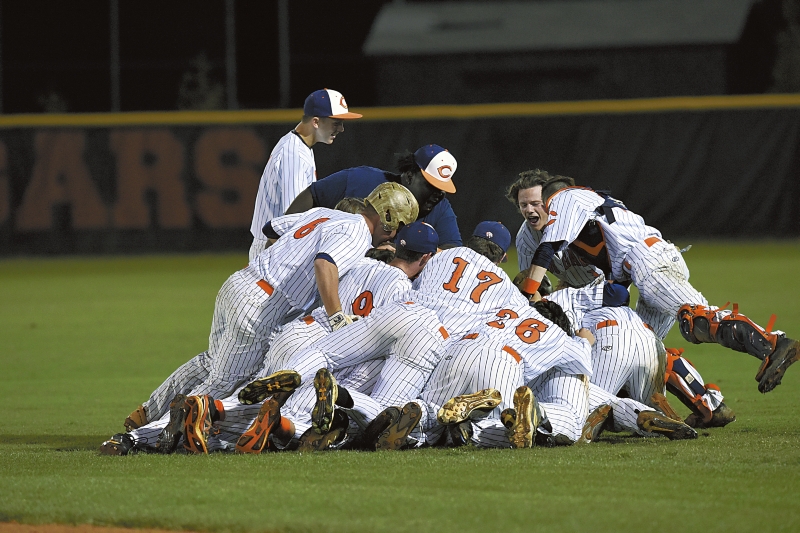 CHINA GROVE — You don’t have to play a perfect game to produce something wonderful, but Carson’s baseball team played one anyway.

There was nothing to fault, nothing to circle in red and nothing to lament in its 10-0 victory over visiting South Rowan in Friday’s SPC Tournament championship game.

“We didn’t give up a run in the tournament,” coach Chris Cauble noted after the Cougars posted their third shutout this week and won their first title since 2013. “That’s amazing by itself. It’s been a pitcher’s league all season but what turned it around for us is our hitting. We did everything right tonight. It was a Carson night.”

The final episode of “As the SPC Turns” left Carson (19-7) hoisting the championship trophy — and deservedly so. After placing third in the regular-season standings, it swallowed the tournament zero-by-zero, sweeping past Cox Mill, Central Cabarrus and now South (17-10). Last night’s Emmy went to left-hander Maddux Holshouser, the junior who provided six shutout innings and extended the Cougars’ unscored-upon streak to 22 innings.

“Maddux threw a gem and that’s all we needed,” teammate Owen White said. “Three shutouts in the tournament is a really big deal. We work every day on pitching with a purpose. We weren’t just slinging it in there as hard as we could. We put some thought behind it and it showed this week.”

Holshouser yielded only two hits — Austin Chrismon’s first-inning double and Jarrid Nelson’s too-late-to-matter base hit in top of the fifth. Relying on a sneaky-quick fastball and a gorgeous change-up, he struck out six, walked three and kept the Raiders guessing.

“I knew I had a great defense behind me so I let them do the work,” he said after a sturdy, 95-pitch effort. “It was just a matter of getting ground balls and locating pitches. The change-up was my best (pitch) tonight because it kept them off-balance and got me ground balls.”

“It’s over,” Chrismon said. “Congratulations to them. We’re looking forward to the (state) playoffs and seeing what we can do there.”

Carson jumped on losing pitcher Dillon Norton early and often. The senior southpaw may have been doomed as soon as leadoff batter Logan Ridenhour reached on an infield error in the first inning. White — who collected four hits and a dirty uniform — and first-baseman Ben Shoaf followed with singles to load the bases before sophomore Luke Barringer crunched a two-run double to the left-center gap.

“We relaxed and focused on hitting the ball hard,” Barringer said after providing three hits and four RBIs. “It worked. We concentrated on squaring balls up and putting them in play.”

“(Norton) left a pitch high and I took advantage,” he said after going 2-for-3 with a sac fly and three RBIs. “That’s what happens when you put it in play.”

Cauble has preached that sermon all season. “We were striking out way too much earlier in the year,” he said. “We’ve cut that down the last two weeks. Put it in play and you’ve got a chance.”

Carson took a 5-0 lead when Barringer coaxed a leadoff walk and eventually scored on a throwing error. Three more runs in the fifth — including one on Brycen Holshouser’s run-scoring hit against a drawn-in infield — put the hosts up 8-0.

The game ended with two away in the last of the sixth. After Barringer delivered another run-scoring hit, Maddux Holshouser feathered an RBI-single into center field that made the Cougars champions.

“Maddux did his job and we did ours,” said White. “It was a perfect game in our books.”

NOTES: Both teams qualified for the 3A state playoffs beginning next Wednesday. Pairings will be announced on Sunday. … Norton allowed five runs — three earned — in four innings for South. Right-hander Matthew Donahue also struggled in relief. … Holshouser won his his sixth game and lowered his ERA to 1.98. … The victory was Carson’s fifth straight since falling to Lake Norman in the F&M Bank Easter Tournament final. The Cougars are 11-1 at home this season. 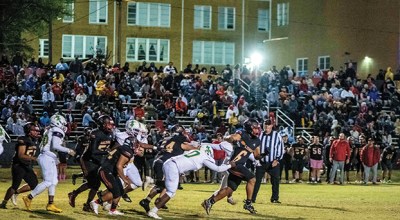