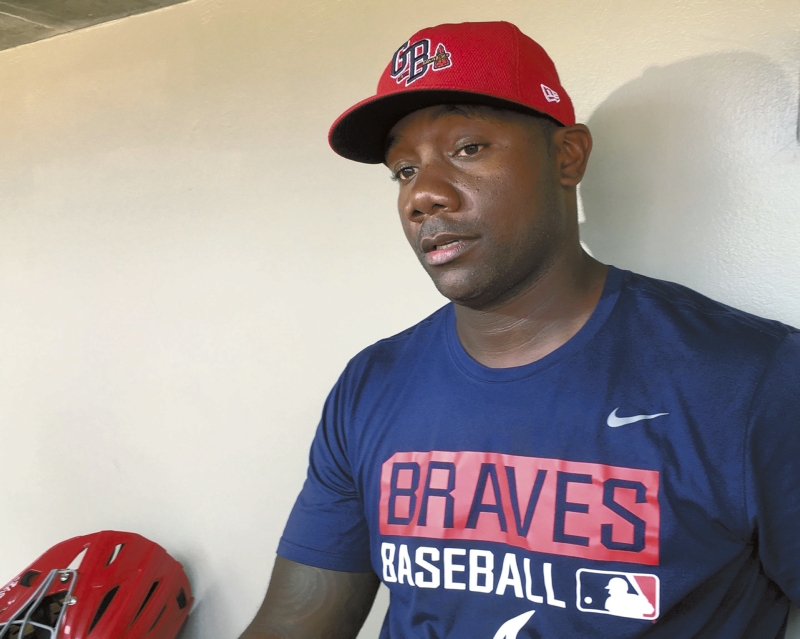 In this photo taken Wednesday, May 3, 2017, Gwinnett Braves' Ryan Howard is interviewed before a minor league baseball game against the Durham Bulls in Gwinnett, Ga. Howard is an MVP, a World Series champion and once one of baseball's most feared sluggers. So what's he doing in the minor leagues at age 37? "I've still got something in the tank," he says. (AP Photo/Paul Newberry)

LAWRENCEVILLE, Ga. (AP) — Ryan Howard was once one of baseball’s most feared sluggers, an MVP and World Series champion, the toast of Philadelphia.

So what’s he doing here, in the sprawling suburbs of Atlanta, a minor leaguer at age 37 , playing alongside a bunch of 20-somethings, enduring bus rides and sparse crowds?

“There’s more in the tank,” he said bluntly. “If you walk away, don’t walk away with something still left in the tank. Then you’re wondering like, ‘Man, what could I have done?’ When I’m done playing, I want to leave it all out on the field.”

Howard certainly could’ve retired after an inglorious, injury-plagued, pitiable end to his Phillies career, more than content with a legacy that produced enough mementos to fill an entire room in his home. Many people, in fact, just assumed he was done after a rousing, retirement-like send-off before last season’s final game in Philadelphia .

But Howard wasn’t ready to walk away.

“It’s been interesting,” Howard said on a balmy spring afternoon, relaxing in the dugout at Coolray Field, home of the Triple-A Gwinnett Braves. “Once you leave the minor leagues, you want to not come back. But it’s the path that I’m on, the journey that I’m on.”

Signed to a minor league deal by an organization that is Philly’s division rival, Howard has impressed the G-Braves with his work ethic, arriving early for games and going through every drill with his younger — in some cases, much younger — teammates.

Before Wednesday’s contest against the Durham Bulls, he took part in two rounds of batting practice and hung out behind the cage with hitting coach John Moses, discussing the nuances of his swing. Howard also fielded ground balls and headed to the outfield to limber up with some strange-looking contortions and gyrations.

“He’s a good human” being, manager Damon Berryhill said. “He works hard, sets a good example for our younger players. He’s been a pleasure to have around.”

Howard is off to a slow start with the Triple-A team, hitting just .188 through nine games. He did launch his first homer against the Bulls, a two-run shot that showed he’s still got some juice in that stroke, but hardly anyone saw it.

Howard is unfazed by the less-than-glamorous setting. His focus is firmly on getting back to the big leagues.

“Get your work in, do what you need do, and get back up top,” he said. “I’m a little behind bit the curve as far as not really having a spring training, so you’re trying to get your work in, trying to work on things, and at the same time, you’re also going out there trying to be competitive.”

When Howard was called up to the Phillies more than a decade ago, he ushered in one of the greatest eras in team history with his prodigious power. Every time he stepped into the left-handed box, he extended his bat toward the sky with one hand, as if to indicate how far he intended to hit the next pitch. In 2006, his first full year starting in the majors, he put together one of the greatest stat lines in baseball history: 58 homers, 149 RBIs, a .313 average, an MVP award .

The Phillies would go on to win five straight NL East titles, a stretch that included two trips to the World Series and a championship in 2008. Howard averaged 41 homers and 129 RBIs during that marvelous run, finishing in the top 10 of the MVP voting every season.

But his career was forever altered on the very last play of the 2011 division series against the St. Louis Cardinals, an excruciating 1-0 loss in Game 5 that ended with Howard tearing his Achilles tendon running out a grounder for the final out .

He hasn’t been the same since.

Even so, Howard was the last remaining holdover from the Phillies’ era of dominance, a convenient symbol of what the team once was and what it had become. He hobbled through five seasons plagued by injuries, dwindling production and a rising chorus of boos from a fan base that once worshipped him. It finally ended with the Phillies declining to exercise a $25 million contract option for 2017 after Howard batted a career-worst .196 while still showing flashes of power with 25 homers.

“You don’t just write off something like that,” Howard said of his time in Philly. “Obviously that’s something that’s been a big part of my life, my career. There’s always going to be that time to pay homage. But right now, as I’m currently still playing, you put that chapter behind you for the time being.”

Howard spent the winter waiting for someone to call. Then spring training passed with him still at home in Florida, working out regularly but looking more and more like the decision to move on with the rest of his life wouldn’t be his to make.

Finally, less than a week into the regular season, Howard agreed to a minor-league deal with Atlanta , the NL East rival he had tormented for years. No promises were made, certainly not for a starting job on a team that already has Freddie Freeman at first base.

But the Braves have a woefully thin bench, and the hope is that Howard will show enough in the minors to warrant a call-up largely for pinch-hitting duties, not to mention serving as the designated hitter for a handful of interleague road games.

It’s hardly the starring role Howard once played, hardly the career path he envisioned for himself.

It’s a step, however, he’s willing to take if it keeps him in the game.