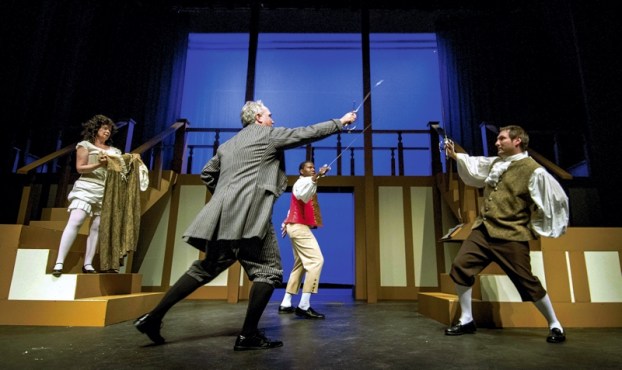 To many people, “Tom Jones” is the Welsh singer from the 1960s who made ladies swoon with his sexy renditions of songs such as “Delilah” and “It’s Not Unusual.”

His full name is Thomas John Woodward — he used the name Tom Jones as a nod to the fictional lothario portrayed in Piedmont Players’ latest production, “Tom Jones.”

And Tom Jones was a character in a book by Henry Fielding, written in the 1700s. What that Tom did was shocking in his day. Simply appalling.

These days, with our jaded attitudes, he seems almost tame.

Marc Trent Tucker plays an understated Tom, clueless as to why all these women are throwing themselves at him. Tom is an opportunist, though, so if a lady is willing to … give him special attention, he goes along without hesitation.

He is loved by Sophia Western, played by a petite Jillian Rippey, a student at Carson High School. She is sweet, at times firm, as she tries to love Tom and deal with his infidelities.

Tom’s guardian is Squire Allworthy, with the redoubtable Big Joe McGee, a magistrate playing a magistrate. The squire rescued the child from certain death when he was left on his doorstep by one of his staff — or so he believes.

His son, Blifil, is as trifling as his name, played by Jon Mitchell, who alternately simpers and lusts for the same Sophia.

Thwackum, another descriptive name, played by Kris Hokanson, is in charge of these wayward boys, and carries a crop, which he used frequently. Hokanson’s turn as a thwarted husband, Mr. Fitzgerald, is also a bit of a cad.

The girl who first gets Tom — and herself — in trouble is Molly, played with high spirits by Melanie Gonzalez. When the same actress plays snooty, scheming Lady Bellaston, she affects an odd speech pattern as she orders people around.

Shawn Van Wallendael and his wife, Lori Van Wallandael, show their stage experience in their roles as Squire Western and the naughty Mrs. Waters. Shawn is young Sophia’s determined, blustery father, demanding this and that, planning her life, defending her honor, denying her a marriage to Tom.

Lori plays another woman who takes a turn with Tom, and she is assured and smooth in her seduction of several other men along the way.

Teresa Pitner plays Mrs. Fitzpatrick, a woman trying to deal with all the goings on. Rita Treichler is Miss Western, a meddling sort, and Sabrihah Hartsell plays several parts — a landlady, the questionable Jenny Jones and a servant.

To round out the fun, Darius Lamar swashbuckles as Ensign Nothington and Mr. Maclachlan and offers comfort as an old curate.

Will Tom ever attain his heart’s desire? Will Sophia forgive him? Will her father look past Tom’s little peccadillos? How can all this misfortune be turned around? Wait and see.

While promoted as bawdy and hilarious, Tom’s behavior is similar to a soap opera character’s, and with Tucker’s quiet, sometimes befuddled portrayal, it’s somewhat difficult to imagine what the women see in him.

There’s plenty of nice sword play and much running up and down stairs on a set that serves as house, garden, woods, an inn, multiple bedrooms, a mansion and more.

The costumes are nicely done, as well.

Piedmont says the play is rated PG-13, but it’s mostly language. Some of the jokes children wouldn’t understand anyway. You’ll see more skin on TV. With a 20-minute intermission, the play is over shortly after 9 p.m.

Crescent Construction and First National Bank present “Tom Jones,” along with Piedmont. Performances continue tonight and Saturday and May 10-13 at 7:30 p.m., with a 2;:30 p.m. performance Sunday. For tickets, call 704-633-5471 or go to www.piedmontplayers.com.

Woman charged after taking her clothes off in store parking lot

By Shavonne Walker shavonne.walker@salisburypost.com SALISBURY — A Salisbury woman was charged for taking her clothes off in a convenience store parking... read more