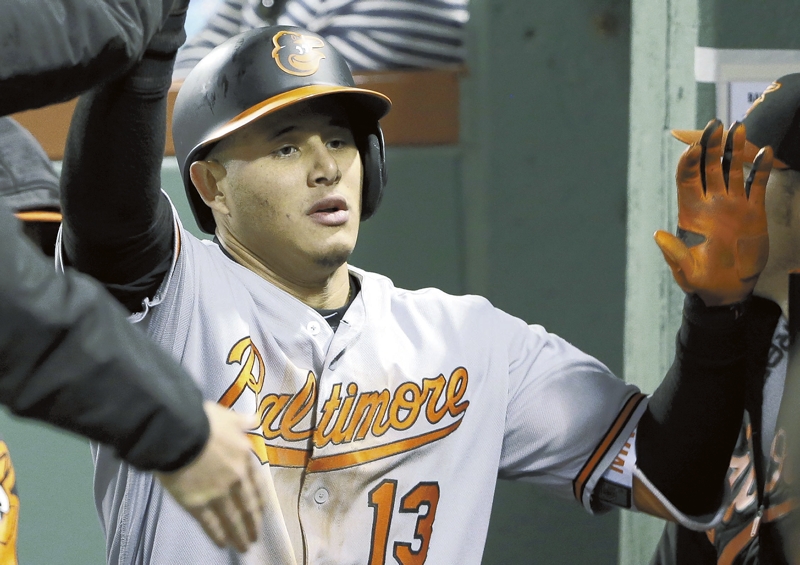 Baltimore Orioles' Manny Machado is congratulated in the dugout after hitting a three-run homer in the fourth inning of a baseball game against the Boston Red Sox at Fenway Park, Thursday, May 4, 2017, in Boston. (AP Photo/Elise Amendola)

BOSTON (AP) — Manny Machado hit a long three-run shot for his third homer of the series and the Baltimore Orioles capped four tense days at Fenway Park with an 8-3 win over the Boston Red Sox on Thursday night.

Machado hit a 466-foot drive over the Green Monster during a five-run fourth inning. Seth Smith had four of Baltimore’s 17 hits.

In a four-game set marred by beanballs, brushbacks and racial rancor, the finale was a sedate affair decided in the fourth when the Orioles turned a two-run deficit into a 6-3 lead. Tyler Wilson (2-1) allowed three runs and six hits in six innings while making a spot start because scheduled pitcher Ubaldo Jimenez was forced to come out of the bullpen Wednesday,

The Red Sox loaded the bases trailing 8-3 in the seventh, and Andrew Benintendi lined the ball deep to right field. Defensive replacement Joey Rickard got turned around but reached out to grab it with the tip of his glove as he fell to the warning track just a few feet in front of the bullpen wall.

Kyle Kendrick (0-1) made his season debut and allowed six runs and eight hits in four innings. Dustin Pedroia homered for Boston — the first of the year for the 2008 AL MVP.

The Red Sox led 2-0 after one inning and 3-1 after three before the Orioles loaded the bases with nobody out in the fourth. Smith doubled in two runs with one out, then Machado came up with two on and two out and lined the ball onto Lansdowne Street

Machado has been at the center of tensions between the teams and was booed during his slow trot around the bases, but there was no indication of racial slurs like the ones directed at outfielder Adam Jones on Monday night. And Red Sox pitchers refrained from taking out their frustration on Baltimore batters, avoiding another brushback war like the one that consumed the teams the past two weeks until Major League Baseball told them to knock it off on Wednesday.

That was bad timing for the Baltimore starter that night, Kevin Gausman, who was ejected in the second inning after hitting Mookie Betts on the hip with a curveball. That forced manager Buck Showalter to use Jimenez in relief and bring Wilson up from Triple-A Norfolk on Thursday.

The Orioles scored on a double-steal in the third, with Smith coming home when the throw to get Machado at second was off-line and in the dirt.

Jonathan Schoop had three hits for the Orioles.

Red Sox: Knuckleballer Steven Wright will have surgery to repair cartilage in his left knee and miss the rest of the season. … LHP David Price threw three innings of a simulated game and hit 95 mph with his last pitch, according to baseball boss Dave Dombrowski. … INF Marco Hernandez (left shoulder subluxation) was placed on the 10-day disabled list. RHP Tyler Thornburg (right shoulder impingement) was transferred to the 60-day DL.