Kentucky Derby: Husband and wife teaming up to help Girvin go after the big prize 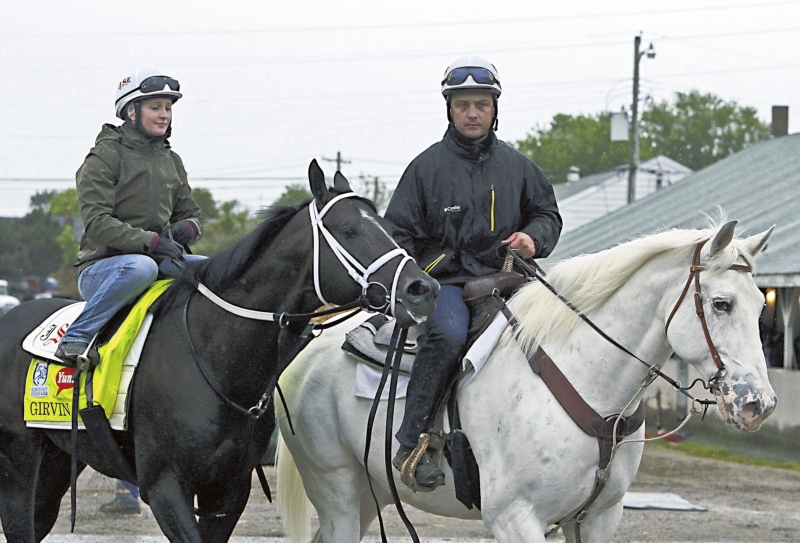 They head back to the barn together, with Napravnik in the saddle and Sharp walking alongside the horse.

Napravnik was once one of the top jockeys in North America before retiring. Now she works as an assistant trainer and exercise rider for her husband Sharp, who will saddle Louisiana Derby winner Girvin in the Kentucky Derby on Saturday.

“I think the biggest benefit is the fact that I don’t have to pay her,” he joked.

After meeting at the racetrack when Napravnik rode a horse for Sharp, they started dating and married in 2011. They split their time between Louisville in the warm weather months and New Orleans in the winter.

Away from the racetrack, the couple has two young sons, Carson and Tucker.

They’ve has reversed roles over the last three years. Napravnik, 29, went from being the celebrity in the relationship — the only woman to ride in all three Triple Crown races — to retirement. She was in the background during Sharp’s emergence as an upcoming trainer at 32.

“I’ve been asked if Joe was like my boss, and it’s more like he’s my mentor,” she said. “A lot of little things come up, and he just handles them.”

Sharp said, “We’ve always had a good balance when it comes to that. I was always a big fan.”

As a jockey, Napravnik’s job was getting a horse to the starting gate. Now, she’s preoccupied with every little step in the animal’s preparation, training and well-being.

“There’s a little more nerves involved,” she said. “I’ve learned so much in the barn. On the people side, it’s just been a complete education and it’s good that Joe is there to show me some things.”

Sharp spent a year as a jockey himself before becoming an assistant trainer. In 2014, he opened his own 70-horse stable the same year Napravnik retired on the spot after winning the Breeders’ Cup Distaff while seven weeks pregnant with her first son.

Napravnik is regularly asked if she’s planning a comeback.

The answer is no.

“If I was going to come back, I would’ve done it the day after the Risen Star and I would’ve done it with this horse,” she said, referring to Girvin’s two-length victory in February. “Before he ran, I was coming off maternity leave and saw him at the track and how he galloped, and he was just beautiful.”

Not so pretty has been Girvin’s path to the Kentucky Derby.

He has a quarter crack in his right front hoof that generated whispers on the backstretch and led to the postponement of his final workout.

Big Brown encountered the same problem during his failed 2008 Triple Crown bid. Quarter cracks are fairly common, with some horses plagued by such an injury throughout their racing careers. It’s a vertical crack in the hoof wall between the toe and heel, usually extending into the coronary band, where the hoof meets the skin of the leg.

Healing time can range from a few days to a few months, depending on the severity of the crack.

“My stress is being there with moral support,” Napravnik said.

The dark brown colt has spent more time in a hyperbaric chamber and swimming than on the track in the weeks leading up to Saturday’s race.

“Everybody is kind of trying to almost make you feel anxiety or make you feel nervous,” Sharp said, “but I just have so much confidence in him. I know he’ll go over and perform to the best of his ability.”

“I know the horse like the back of my hand,” Sharp said. “I’m comfortable in the decisions that we’ve made.”

If Sharp isn’t panicking, it’s because unlike most trainers, he’s never been obsessed with the Derby.

“I wasn’t the little kid that couldn’t wait to win the Kentucky Derby,” he said. “The bigger step to me is the (Breeders’ Cup) world championship.”

AP Sports Writer Gary B. Graves contributed to this report.