‘Keep pushing:’ Livingstone College senior is a man of many talents 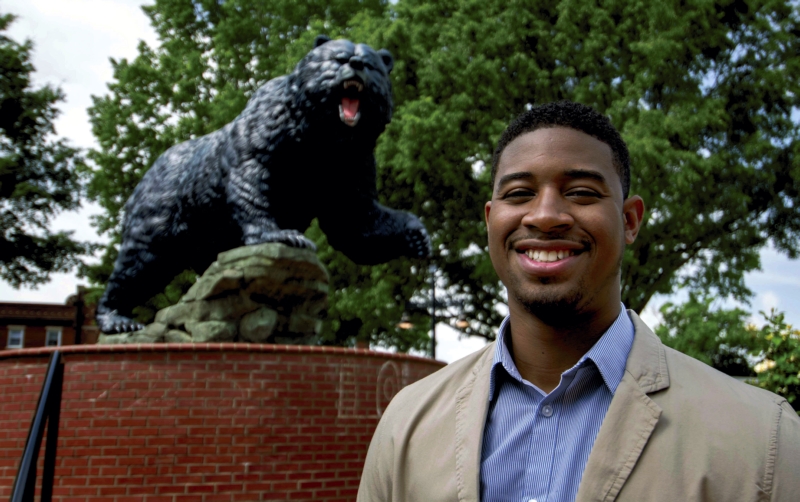 SALISBURY — LaMonte Bird is something of a Renaissance man. At just 26, the Livingstone College senior is a published author, business owner, motivational speaker and minister.

For Bird, the journey started in 2011 when he decided to come to Livingstone from Detroit. He had never pictured college as part of his future, he said, but his grandmother pushed him to get an education and an uncle working in the Livingstone admissions department encouraged him to apply.

“And then I just fell in love with the whole N.C. atmosphere,” he said.

After long years of juggling study and work, he will graduate Saturday with a bachelor’s degree in business administration.

Bird describes himself as a risk taker. He has had some stumbling blocks along the way, but he sticks to his motto: “Keep pushing.”

Bird grew up on the east side of Detroit, the son of a small business owner. He said he remembers his dad coming home from a full-time day job and immediately heading out to cut grass for his landscaping business.

“Having him as a role model, being an entrepreneur of how to hustle and how to grind and how to do what you have to do to provide for your family, pretty much really, really pushed me to do the same,” he said.

But Bird also saw that his father didn’t have much time to spend with his family. He said he decided that when he grew up, he wanted to have the freedom to make his own schedule.

“That right then and there is where I changed,” he said.

“From social media, it really, really gave me that opportunity to branch out and to be who I am in reference to traveling and speaking into people’s lives and pushing them to do better, or pushing them to be able to accomplish their dreams,” he said.

That same year, he became a minister. While speaking at a youth service in Detroit, he had a revelation. Bird said he was familiar with youths growing up without father figures, older brothers or mentors. He realized that he could be that figure.

From there, he moved into motivational speaking. Now, Bird speaks two to three times a month in North Carolina or back home in Detroit. He has spoken before groups in Atlanta and Florida.

He also became an author, writing “Nine Habits to Become Successful,” a book published earlier this year. And he started his second business, Bird Consulting, to advise friends and customers on business ventures.

For Bird, the biggest challenge has been accepting the process — failures and all.

“We want our success and our dreams or whatever we want in life faster than the reality of it,” he said.

Bird also recently took over his father’s landscaping business. Juggling school, businesses and speaking gigs hasn’t been easy. Bird said he has to prioritize each week, knowing that he’ll have to let something go.

“Juggling all of those, you’re definitely going to fail at it — one of those things. Every day, every week,” he said.

When he gets overwhelmed, he keeps his motto in mind and pushes forward. And on Saturday, much of that hard work will pay off when he finally holds his degree in his hands.

“I can’t believe it, honestly,” he said.

Bird said the future is bright. He plans to return to Detroit but will travel back and forth between Michigan and North Carolina to manage his businesses. He has a second book in the works that he plans to publish in July 2018. And, above all, he plans to “keep pushing.”

“It was a long road to get to where I am now,” he said with a smile.