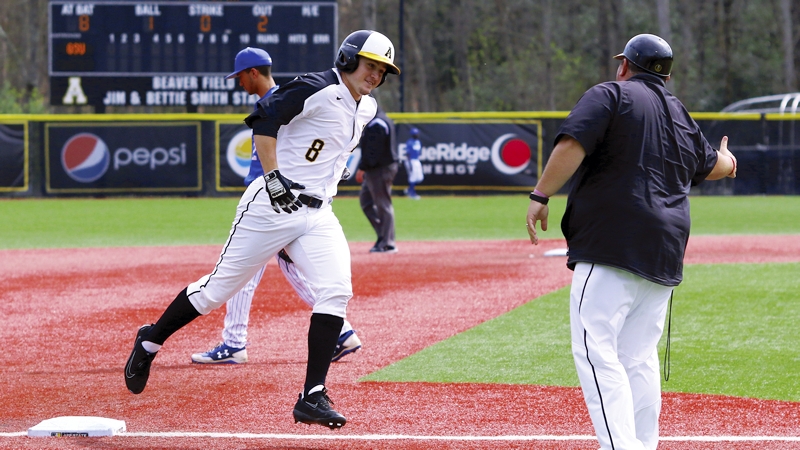 ASU sports information photo ... Appalachian State senior Brian Bauk (8) rounds third base after cranking a two-run homer in a 6-1 victory over Georgia State on April 22 in Boone. Bauk, from Salisbury, was a two-sport star at Salisbury High School.

“Twenty-eight degrees, plenty of wind, and snowing at the first practice,” Bauk said in a phone interview. “I’m a senior, but knowing this was my last first day, I did have some butterflies.”

The early-season weather in Boone makes things challenging, but the Mountaineers attempt to use the wind gusts and low temperature as a sort of home-field advantage. There’s always at least one Mountaineer who takes his shirt off at the first practice to show that wind chill is just a state of mind.

That shirt-shedding guy is not Bauk. He’s way too smart for that. Bauk majors in cell and molecular biology.

“It’s not really as scary a major as it sounds,” said Bauk, who is on track to earn a degree next fall.

The former Salisbury High quarterback/pitcher/outfielder likely has medical school and a rewarding working life ahead of him. Whether or not that  life will include more baseball when Appalachian State concludes the 2017 season, is up in the air.

“I talked quite a bit with the (San Francisco) Giants before the MLB draft last year,” Bauk said. “They were looking at taking me between the 20th and 25th rounds as a pitcher, but my shoulder wasn’t feeling great, the money would not have been all that much, and I knew my best option was returning to school for my senior year. I let the Giants know that. I haven’t regretted it.”

Besides being smart, Bauk has the required physical tools to play professionally. While he’s a right-handed pitcher, he’s a lefty hitter. He has excellent speed, a sturdy, 6-foot, 202-pound body and a great throwing arm, when he’s fully healthy. In some respects, he’s been almost too talented. Appalachian State used him as a two-way player for three years. It’s what he wanted, but it’s been a tough grind, and it may have hindered his development some as a hitter.

In high school, Bauk didn’t have the muscle he has now, but he was the ultimate two-way guy on the diamond. As a junior, he led the Salisbury Hornets in hits, runs, steals, batting average, wins and strikeouts. As a senior, he smacked six triples, scored 25 runs and posted a 1.13 ERA. His success continued in American Legion baseball. In 2013, the summer before he headed to Appalachian State, he batted .378 and scored 40 runs in 32 games for Rowan County. He also went 6-0 on the mound.

Bauk’s wheels and arm strength also made him an outstanding high school football player for strong Salisbury teams. As a senior quarterback in the fall of 2012, he rushed for 1,275 yards and 16 touchdowns.  He sprinted for three TDs in the Hornets’ epic 36-35 win against High Point Andrews in the third round of the 2A state playoffs.

“There were some good times last year,” Bauk said. “We won a series against South Alabama late in the year when they were ranked very high.”

As a senior, playing for new head coach Kermit Smith, Bauk has elected to give his shoulder rest and time to heal. He’s been stationed in right field all year, but he hasn’t pitched at all.

“I went to the coaching staff before the season, we talked about it, and they were great about understanding,” Bauk said. “I felt like my shoulder was good enough to play but not to pitch. It was a big decision not to pitch, but I believe it was the right one.”

Since most pro teams projected Bauk as a pitcher, his prospects for the  upcoming June draft dimmed somewhat. Prior to the season, he was listed as the Sun Belt Conference’s sixth-best prospect by Baseball America.

“It’s true the draft is not looking as good as it used to,” Bauk said.

But it’s still possible that Bauk will get a look as an outfielder. He pitched and hit for two summers for the Baltimore Dodgers in the Cal Ripken Collegiate Baseball League and had success with a wood bat. Last summer, in 23 games, he batted .308 with two homers and was 7-for-7 on steal attempts.

Knowing this might be his last season of baseball, Bauk has thrown himself into his senior year with everything he has. He’s played in more career games for App. State than anyone else  on the roster, so he’s naturally become a team leader.

“I’ve been happy that we’ve played together and we’ve played hard,” Bauk said. “We’ve got a lot of younger guys, but they’ve competed.”

This season didn’t start well for Bauk in the batter’s box. A tough schedule that included a trip to South Carolina combined with the weather and his shoulder for a frustrating start. Then his timing got out of kilter.

“I had a flaw in my swing,” Bauk said. “When we went to Missouri in March, I couldn’t have hit a beach ball.”

Bauk finally got settled at the plate again in April. He had a super series against Georgia State (6-for-11, six RBIs) in Boone that boosted his stats. Now he’s batting .243 with eight doubles, a homer and 22 RBIs.

Now his senior season is entering the home stretch. South Alabama will be coming to Boone May 12-14 and the Mountaineers (18-27) will travel to take on defending national champion Coastal Carolina in a series right before the Sun Belt Conference Tournament in Statesboro, Ga., on May 23.

“I’m a competitive person and I know we’re not going to roll over for anyone that we play, no matter who it is,” Bauk said. “We’ll finish strong. We’ll play as long as we can.”