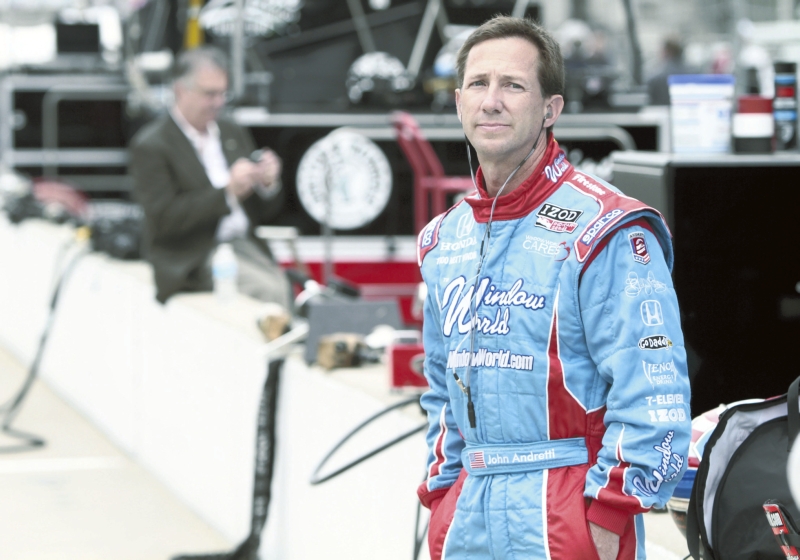 FILE - In this May 19, 2010, file photo, John Andretti watches during practice for the Indianapolis 500 auto race at the Indianapolis Motor Speedway in Indianapolis. The month of May is traditionally a celebration for the Andretti family. This year, John Andretti, Mario Andretti's nephew, is battling late-stage colon cancer that has spread to his liver. (AP Photo/AJ Mast, File)

He started 49 consecutive IndyCar races from 1990-92 before moving to NASCAR, where he made 29 or more starts every year from 1994-2003. He was the first driver to attempt the Memorial Day double. And when his driving career was winding down, Andretti still found a way to give something back to the fans and the sport.

Now, the 54-year-old finds himself fighting for his life against stage four colon cancer that has spread to his liver.

“It’s tough because me and John are close,” former IndyCar driver and current team owner Michael Andretti said Thursday in Indianapolis. “It was devastating for the whole family when they got the news and on top of that it’s very frustrating because it could have been prevented. If he’d gone a year ago, we wouldn’t be here.”

May in Indianapolis has been a family spot for the Andretti family for more than half a century.

Twin brothers Mario, Michael’s father, and Aldo, John’s father, first started coming to the Brickyard in the mid-1960s. In 1984, Mario found himself against Indianapolis 500 rookie Michael. John joined the family club in 1988 and after making seven straight starts, through 1994, left for NASCAR. During his absence, Mario tested a car for his injured son and Michael came out of retirement to race against his own son, Marco, in 2006. In 2007, three Andrettis — Michael, John and Marco — were back on the 33-car starting grid.

This time won’t be the same.

Rather than recounting the good old days, talking about The Andretti Curse or perhaps the three biggest story lines in town this month — defending champion Alexander Rossi, two-time Formula One champ Fernando Alonso and  Andretti Autosport’s six-car team —  has been overtaken by John Andretti’s sad story.

The first indication of his condition came Monday. By Thursday, team officials had scheduled a news conference with Michael and Jarett Andretti, John’s 24-year-old son, to confirm a diagnosis local NBA affiliate WTHR first reported Monday. Their message was simple: Don’t wait to get a colonoscopy.

“He’s going through excruciating pain and that’s what made me think,” said 54-year-old Michael Andretti. “I’ve been wanting to do it the whole time, but I just kept putting it off.”

Just a few weeks ago, Michael Andretti finally went in for a colonoscopy, which he said came back clear and put his mind at ease.

Meanwhile, Jarrett Andretti said that as his father battles the side effects of chemotherapy, he has been working out, has seen the cancer cells in his blood count decline, and that he remains upbeat. Plus, he has an entire racing community rooting for him.

“He’s been fighting his whole life,” Jarett Andretti said. “He doesn’t smoke, he doesn’t drink, nothing. But he’s strong and he’s still fighting.”

And he’s about to start telling his story.

John Andretti has scheduled a news conference for Monday in Charlotte, is expected to take questions from reporters in Indy on May 18, and Michael Andretti is planning an announcement before race day, May 28, to say what the team will do to honor his cousin.

Kentucky Derby: Husband and wife teaming up to help…