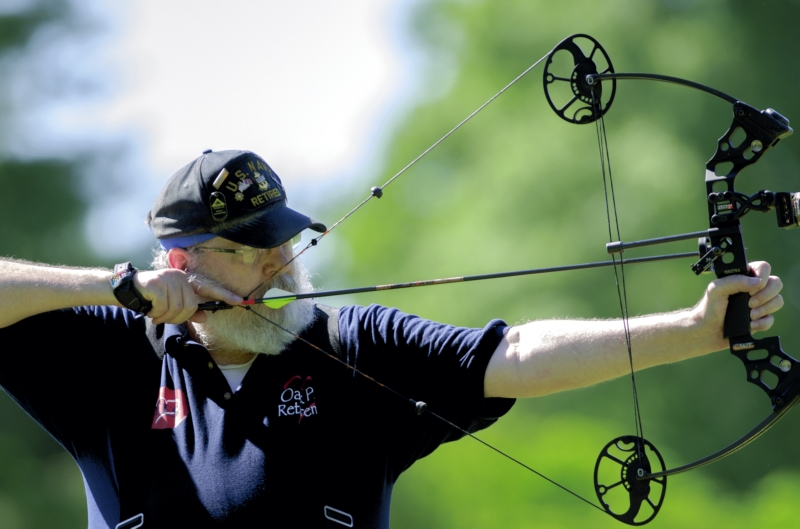 Dennis Eccleston aims his bow at 60 yards during the Senior Games in Ellis Park on Wednesday. Kristi Craven/Salisbury Post

ELLIS CROSSROADS — Standing 60 feet from his target, Bruce McNeely pulled his bowstring to his face, aimed his arrow and let it fly.

McNeely, a Senior Games participant, watched as his arrow zipped across Ellis Park toward its target. He turned toward the small group of onlookers after it became unclear whether the arrow hit its target.

“I didn’t hear anything,” said Dennis Eccleston, a Senior Games participant who stood nearby.

“That’s one of those silent arrows,” McNeely fired back.

McNeely said he participates in other Senior Games events but decided to give archery a shot. Last year was his first competing in archery events.

“I enjoy archery, and when I found out they had it, I decided it might be fun to do,” he said.

After missing the target several times, McNeely joked that he should avoid archery and stick with other competitions.

One after another, Eccleston’s arrows on Wednesday struck the target with an audible thud. He used a compound bow with a sight and finger tab. McNeely opted to shoot “bare bow” — without the sight or finger tab.

Eccleston said the key to his accuracy is “to hold everything steady.” Practice may be another important factor. The Oak Park Retirement Community, where he lives, recently purchased an archery target that Eccleston uses. He uses a pack of metal pegs to mark distances from the target.

Depending on their final scores from Wednesday’s event, McNeely and Eccleston may qualify for the 2017 Senior Games archery competition, said Rowan County Senior Games organizer Phyllis Loflin-Kluttz. Participants compete against senior citizens of a similar age.

The spring games started in February and will end May 22.

Loflin-Kluttz said it’s too late to sign up for the spring games, but there will be other Senior Games events later this year. She said people older than 50 can participate in the Salisbury-Rowan Senior Games.

Pickleball is the most popular sport.