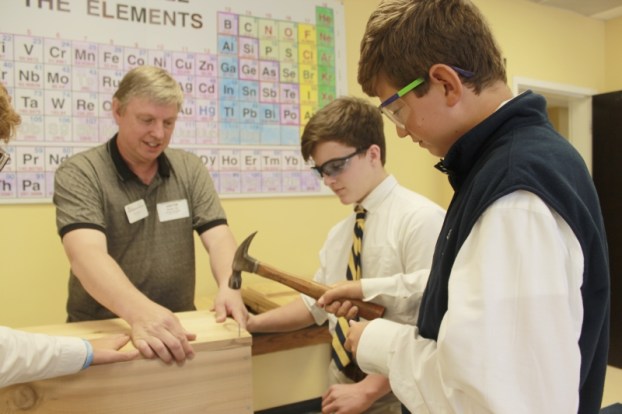 SALISBURY — This year, Sacred Heart Catholic School’s middle school was chosen to be a member of the Land Trust for Central North Carolina’s Leopold Society. Students spent last Friday working with Sam Parrott from the Land Trust learning about ducks — the wood duck, in particular.

The wood duck is one of the most colorful of North American waterfowl and Parrott’s favorite, he told students.

The wood duck was once in serious decline because of overhunting and habitat destruction. With conservation efforts, it is no longer a threatened species and is common in North Carolina.

The waterfowl banding and recovery program provides location data that is used to help biologists determine waterfowl migration routes. By banding ducks and geese in the northern breeding areas and then marking the points where hunters and others recover them, biologists identified the four major migratory pathways, or flyways, that cross North America. Biologists band more than 200,000 ducks and nearly 150,000 geese and swans in North America each year.

Using iPads, students were able to compare and contrast the plumage of male and female wood ducks so that they could identify the waterfowl.

Parrott told students that the male duck is much more colorful. “The better they look, the better they do with the ladies,” he added.

Students created artwork of a nesting pair in their natural environment.

As a service project, students they spent the afternoon building wood duck nesting boxes with help from Randy Cox of the Rowan County Master Garden Association. Later, they will help place these boxes on conservation land that is commonly used by wood ducks for nesting. They will also have the opportunity to band wood ducks.

“This partnership between our students and the Land Trust is so important,” science teacher Hillary Shores said. “We are building the next generation of conservationists.”

In preparation for a field trip to Cedar Grove Retreat Center in Kannapolis, students spent Friday afternoon learning about the Land Trust, the Leopold Society and their role in working with state and federal agencies to preserve wildlife habitats, migratory waterfowl conservation and the waterfowl banding program. Parrott presented students with their Leopold Society passports.

Historic Salisbury Foundation SALISBURY — Hundreds of hours are spent each year, along with blood, sweat and tears, as owners, volunteers... read more