Red Sox, Orioles are still not happy with each other 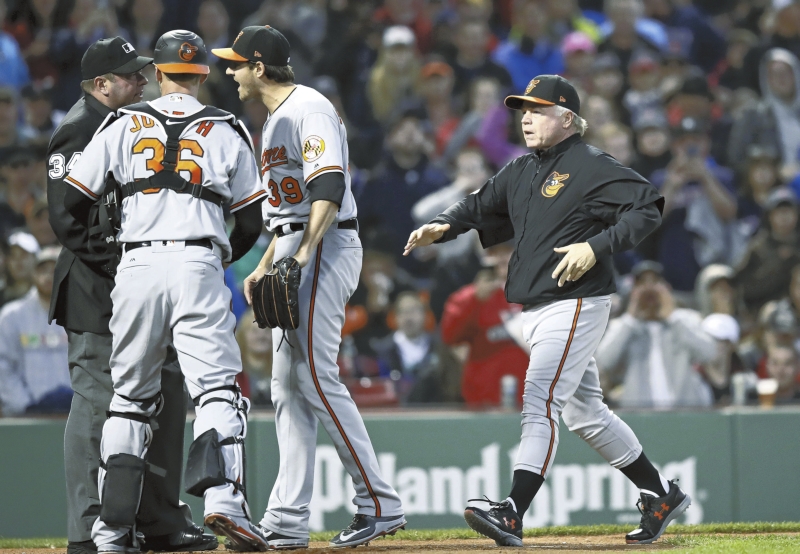 Then the umpires backed it up.

Hours after a conference call to tell the Red Sox and Orioles “Enough is enough,” Baltimore starter Kevin Gausman was ejected in the second inning for hitting a batter and Boston went on to win 4-2 Wednesday night.

“Given the situation and the tension between the two clubs and all the stuff that’s gone over the past few weeks, we’re all on high alert with anything,” crew chief Sam Holbrook said in a statement to a pool reporter. “There needs to be an end to this stuff, and I felt like an ejection was the right thing to do at that time.”

Orioles center fielder Adam Jones was tossed later, after arguing a called strike in the fifth. On Monday night, the All-Star was the target of racial slurs at Fenway Park, and on Tuesday the Red Sox fans gave him a loud ovation.

Gausman was ejected after what appeared to be a curveball hit Xander Bogaerts. Catcher Caleb Joseph slammed his mask on the plate and manager Buck Showalter bolted from the dugout to argue. Gausman looked puzzled, at first, and then hollered.

Gausman said it was “pretty bush league” that he was tossed, especially since Red Sox starter Chris Sale was merely warned after throwing a pitch behind Manny Machado the night before.

“He did it on purpose, and everybody knew it,” Gausman said. “For him to get away with it, and I hit a guy with a curveball and they throw me out of the game, that’s pretty ridiculous.”

Josh Rutledge drove in a pair of runs for Boston after entering the game in the first inning when starting third baseman Marco Hernandez left with a strained left shoulder. Drew Pomeranz (3-1) gave up two runs on five hits, his fourth time in five starts he’s allowed two or fewer runs.

Craig Kimbrel struck out the side in the ninth, fanning Machado to end it for his 10th save.

Torre held a conference call with the two managers, Red Sox president of baseball operations Dave Dombrowski and Orioles GM Dan Duquette Wednesday afternoon. Red Sox manager John Farrell said Torre had told the teams to knock it off, but that there were no warnings about hit batters.

“I guess the best way to describe it is: I can confirm that there was a call and it happened for both clubs, to basically address the last two weeks and to say, ‘Enough is enough,’” Farrell said before the game, adding that he hoped that would be the end of it.

Orioles: Showalter said RHP Chris Tillman, bothered by shoulder tendinitis since spring training, “threw the ball well” in what’s expected to be his final rehab start on Tuesday. He’ll meet the team Friday in Baltimore for his usual workday before the O’s decide where to slot him into the rotation.

Red Sox: Farrell said knuckleballer Steven Wright, who was put on the disabled list Monday with a sprained left knee, is “contemplating the options that are available to him and “surgery’s not ruled out.” . Farrell also said the team hopes to get utility infielder Brock Holt (vertigo) out on another rehab soon.

Orioles: Ubaldo Jimenez was slated to pitch the series finale, but with Gausman’s early ejection they had to go into the bullpen and Jimenez pitched three innings Wednesday.

Red Sox: Kyle Kendrick will be called up from Triple-A Pawtucket Thursday to make his debut with Boston.