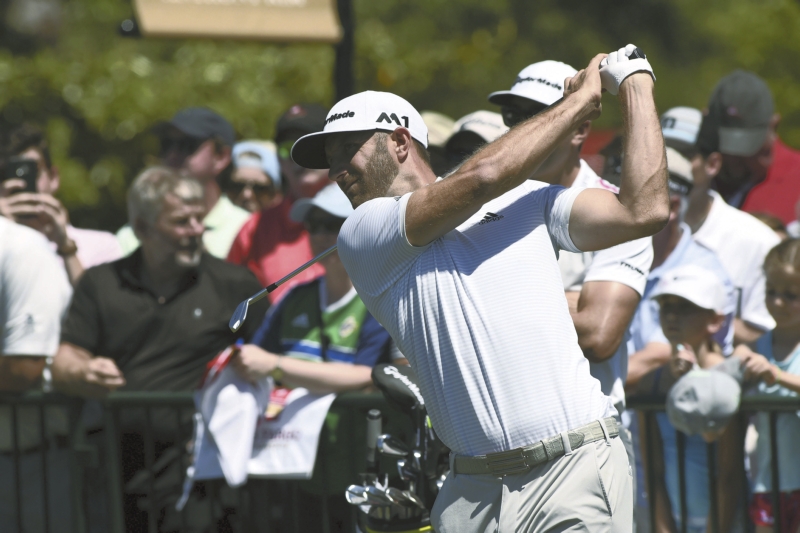 Dustin Johnson warms up on the driving range during practice rounds at the Wells Fargo Championship at Eagle Point golf course on Tuesday May 2, 2017 in Wilmington, N.C. (Ken Blevins/StarNews via AP)

From 107 yards away on the fourth hole Wednesday at the Wells Fargo Championship, his shot took a big hop on the firm green and flew straight into the cup for an eagle. The crowd erupted in cheers, while Johnson simply smiled and used his shoe to tamp down the corners of his divot.

It takes a lot to get Johnson excited, much less during a pro-am.

Johnson didn’t hit any the Masters. That’s still a sore subject, even though his back no longer is.

The Wells Fargo Championship is his first tournament since a freak accident knocked him out of the Masters a month ago. Having just returned from the gym, Johnson was still in his socks when he went downstairs in his rented home to move his car.

He slipped near the bottom and crashed so hard on his lower back that it left a deep bruise, and the pain didn’t entirely subside until last week. Johnson tried to warm up the next day for the opening round at Augusta National and decided minutes before his tee time that he couldn’t go.

Now it’s time for golf’s No. 1 player to get back to work.

“Feeling good,” Johnson said. “Healthy, so can’t complain. Obviously, I haven’t played much or done a whole lot of practicing, but the body is all good. Glad to be back out playing again.”

Still to be determined is whether the fall cost him more than playing in the Masters.

There’s also that matter of momentum.

Johnson was starting to look unbeatable heading into the Masters. He had won three straight tournaments, two of them World Golf Championships, and was the most overwhelming favorite at the Masters since Tiger Woods was No. 1.

But he hasn’t hit a meaningful shot since he won the Match Play on March 26. Given a choice, Johnson prefers to look at his time away differently.

“No one’s beaten me since February,” he said with a grin.

That was Feb. 12 at the AT&T Pebble Beach Pro-Am, when he finished third behind Jordan Spieth. Johnson overwhelmed the field at Riviera a week later to reach No. 1 in the world for the first time, and only a staircase has stopped him since then.

He expects a little rust at Eagle Point Golf Club, a Tom Fazio design in this coastal Carolina town that is hosting the tournament this year because Quail Hollow Club in Charlotte is preparing for the PGA Championship this summer.

Johnson said he didn’t play 18 holes until 10 days ago at home in Florida. He took his family to Disney World last Thursday — he went with his 2-year-old son, Tatum, on all the rides — practiced and played nine holes on Friday, and then got so sick that he didn’t get out of bed until Monday.

The tee shots are still powerful with a slight fade, the most intimidating club in his bag. He was far from flawless, though. Johnson hit five shots on the par-5 12th, none of them particularly good. Two tee shots went left, one of them well to the right. From 250 yards, he twice came out of a 2-iron and knew both were in the water well before he saw the splash.

Johnson said he expects to play well, even though he’s not entirely sure what to expect.

“I was on a good roll, playing the best golf of my career leading into Augusta,” he said. “I’ve had a lot more time off than I would have liked to have had. Still, I feel like I’m swinging really well. Hit a few good shots out there today. But we’ll just have to see. I haven’t played many rounds, and definitely haven’t played any competitive rounds since six weeks ago.”

Johnson is still working on a PGA Tour winning streak, the longest since Rory McIlroy also won three straight in the summer of 2014. If he were to win a fourth straight tournament, it would be the longest since Woods won five in a row from September 2007 through March 2008.

Johnson also could widen the gap between No. 1 and No. 2 at a distance only Woods has managed over the last two decades.

“Those kind of runs is more like what we saw from Tiger for so many years where he just continued to perform at a high level every time he pegged it up,” Adam Scott said. “If he keeps that going, then he’s on track to being one of the greatest players that’s ever played, because he’s got all the weapons.”

Johnson will get a better sense this week if he’s still on track or if he’s starting over.

Red Sox, Orioles are still not happy with each…