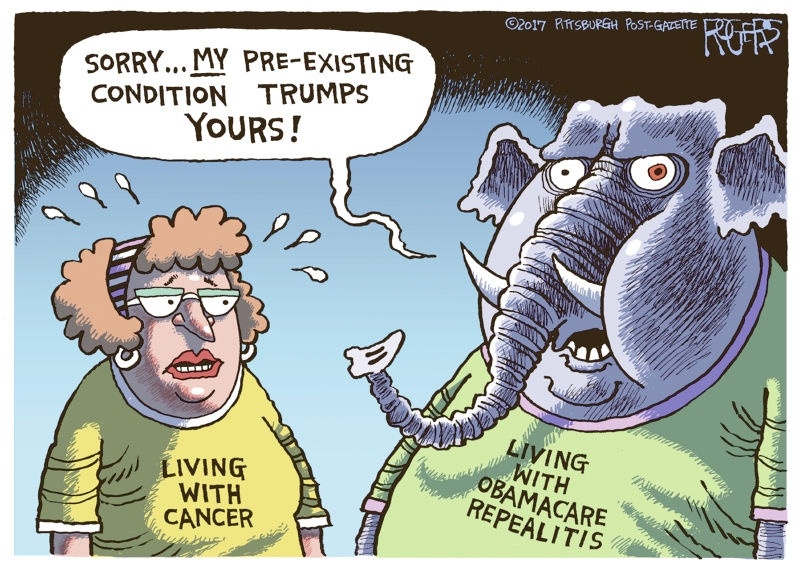 On March 24, when Speaker Paul Ryan pulled the GOP Obamacare bill before what would have been a sure defeat, he said, “We’re going to be living with Obamacare for the foreseeable future.”

But why? Republicans have 238 seats in the House. Repealing Obamacare will require 217 votes. Even with unanimous Democratic opposition, Republicans could lose 21 votes and still prevail on repeal.

It’s’s becoming increasingly clear that Republicans have not repealed Obamacare because a lot of Republicans do not want to repeal Obamacare.

They don’t even want to sorta repeal Obamacare. The bill currently on the table, like the bill pulled in March, falls far short of a full repeal of Obamacare. And yet Republicans still cannot agree on it.

About a week after the first Obamacare repeal failure, a House Republican, speaking privately, said the difficulty in passing the bill was not a parliamentary problem involving the complexities of the Senate. No, the lawmaker said, “It is a problem that we have members in the Republican conference that do not want Obamacare repealed, because of their district. That’s the fundamental thing that we’re seeing here.”

“I thought we campaigned on repealing it,” the lawmaker said. “Now that it’s our turn, I’m finding there’s about 50 people who really don’t want to repeal Obamacare. They want to keep it.”

Other conservatives are saying similar things. In an email exchange Thursday afternoon, I asked one member where the latest bill stood. “We absolutely do not have the votes to repeal it,” he answered. “The fact that some members are balking at even allowing states to waive out of some of Obamacare regulations is proof positive. We’ve gone from ‘repeal it root-and-branch’ to ‘Mother-may-I opt out of some of Obamacare’ — and we still are having trouble getting the votes.”

“Whatever we come out with, it will say to the American people that a full repeal of Obamacare is no longer in the cards,” King added.

Yet another Republican member, in an email exchange, estimated that there are 25 to 30 House Republicans “who don’t want to be forced to make the repeal vote.” Even that lower number would be enough to sink a repeal measure.

Other GOP lawmakers are openly conceding that whatever the House does — if it does anything — it won’t actually repeal Obamacare. Large parts of Barack Obama’s legacy legislation will remain standing, a fact that more Republicans are admitting as time goes by.

Some Republicans remain optimistic, but in a much longer-term sense. “The process of removing a 2,300-page law with 20,000 pages of rules can’t be done in one vote,” says the member who estimated that 25 to 30 Republicans don’t want to vote for repeal. “The process will take two years.”

The Republican-controlled House and Senate both voted to repeal Obamacare in January 2016. In the House, 239 Republicans voted for repeal, while three voted against it and four did not vote. President Obama vetoed the bill.

Now, with a president who would sign an Obamacare repeal, Republicans can’t get as many votes as last year.

The reason is fear. When the lawmaker said colleagues don’t want repeal “because of their district,” that was another way of saying the voters they represent don’t want repeal. From The Hill: “Many vulnerable Republicans are running scared. One moderate Republican was overheard in a House cafeteria telling an aide: ‘If I vote for this healthcare bill, it will be the end of my career.’”

The conservatives’ numbers could be right: There are a lot of Republicans, say 40 to 50, who don’t want to repeal Obamacare. Given unanimous Democratic opposition, that means that there are somewhere around 190 or 195 House members who actually want to repeal Obamacare. That will never get the job done. Even a lower estimate, of 25 to 30 who don’t want repeal, would make success impossible. And if that is the case, the question is, why are Republicans trying?