The art and science behind Yellowstone’s conservation history 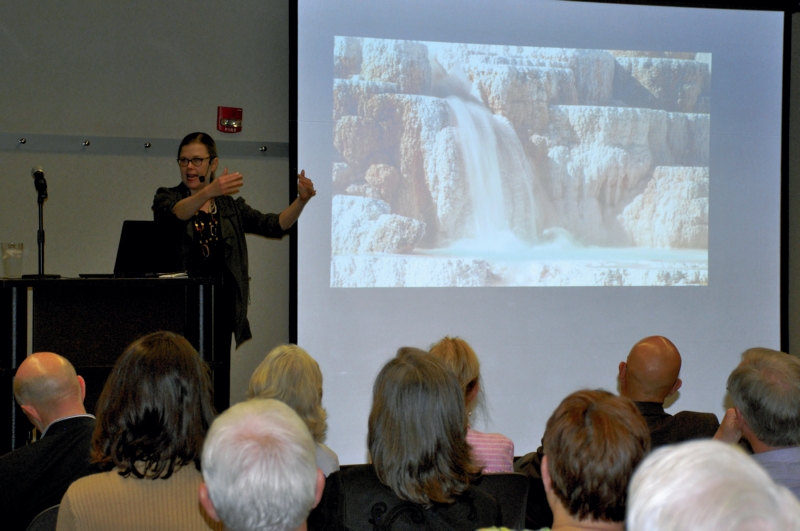 Heather White speaks to a crowd about conservation in Yellowstone. Submitted photo

The Center for the Environment

SALISBURY — When most people think about Yellowstone National Park, they probably think about its 10,000 geysers — more than anywhere in the world. Or they may think about its expansive plains full of bears, wolves, elk and the endangered bison.

But for Heather White, president and CEO of Yellowstone Forever, “Yellowstone is a reflection of our idea of conservation management.”

White told an audience at the Center for the Environment at Catawba College on April 27 how the history of Yellowstone has influenced the United States’ conservation management programs today.

Yellowstone was named the first national park because of the efforts of Western explorers and artists. Explorers such as Jim Bridger brought back stories of “mountains made of glass,” “boiling rivers,” and “hissing fumaroles,” which are volcanic vents.

But it wasn’t until artists started to accompany the explorers on these journeys that people actually started to believe their accounts. Paintings by Thomas Moran and photographs by William Henry Jackson were some of the strongest arguments in the lobbying efforts to convince Congress that Yellowstone needed to be protected. In 1872, it was established as the first national park.

Photography was also partly responsible for one of the first conservation regulations, the Lacey Act. It came about because of a bison poacher named Edgar Howell. In 1914, there were only about 200 bison left in the world. When photos of the poached bison were published in the widely circulated ancestor to “Field and Stream” magazine, they surprised many people. The Lacey Act, which prohibits the trade of illegally taken wildlife, was passed soon after.

White said there have been some bumps along the way in the preservation of Yellowstone. For instance, the park administration decided in its infancy that getting rid of wolves was a good idea so they would not harm tourists. They also set up lights and lookouts around dumpsters so tourists could watch bears dig through the trash.

They were quick to realize that these ideas were not the best in terms of conservation of park. White said these incidents serve as good tools to look back on “what our best thinking (was) in that time period.”

“As conservation management has grown, so have our laws in Yellowstone,” she said.

Wolves have been reintroduced to Yellowstone, and National Park Service personnel were able to witness firsthand the positive ecological impact of their return. For instance, the overpopulated elk soon came under control. And with fewer elk, the number of aspen trees increased in the forests because they were a food source for elk. With more aspen trees, beavers had more material to make dams that help filter toxins out of streams.

These conservation efforts are why White believes that everyone should get “a moment to experience the magic and mystery” of Yellowstone National Park.

Yellowstone Forever is the nonprofit partner of Yellowstone National Park. It is a merger between the non-profit Yellowstone Association and Yellowstone Park Foundation.