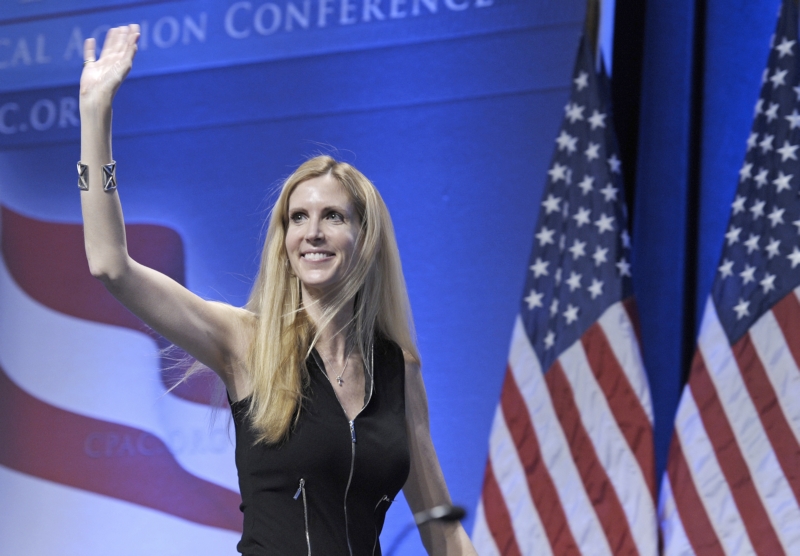 Ann Coulter waves to the audience after speaking at the Conservative Political Action Conference (CPAC) in Washington in 2011. AP photo

Look, I’m the guy who once called her a “viperous harridan,” OK?

That was 11 years ago in this space. I described her as such after she savaged four widows whose husbands died in the Sept. 11 attacks, denouncing them as “witches” and “broads” who were “enjoying their husbands’ deaths.”

So I don’t need to be convinced Ann Coulter is a bad person. But for as much as readers with whom I have been sparring on Twitter the last few days might wish otherwise, her character is not the issue here.

“Here” meaning last month’s standoff between the abrasive conservative pundit and the University of California, Berkeley. As you may know, Coulter was invited to speak on the famously liberal campus, but UCB first restricted the time of day she could do so, then tried to convince her to switch to a day when classes are suspended as students study for finals. When Coulter refused, the school canceled the event.

Berkeley, you should know, has been the site of recent political street fighting. A February riot, orchestrated by about 100 black-clad punks, caused $100,000 in damage and succeeded in preventing an appearance by right-wing provocateur Milo Yiannoupolos. UCB said there was a credible threat of a repeat performance if Coulter spoke.

She had vowed to show up anyhow and appear, if need be, in Sproul Plaza, an open public concourse that was, not incidentally, the 1964 birthplace of the free-speech movement. Last Wednesday, under pressure from UCB, the two conservative groups that were sponsoring her visit rescinded the invitation, and Coulter said she would not come.

Many of my more liberal Twitter followers, loathe to support Coulter on  … well … anything, have resisted — sometimes with desperately creative logic — the notion that this is an issue of free speech. Here are some of their arguments and my answers:

Them: The First Amendment applies only to government censorship.

Me: You’re right. And UCB is a public institution, supported by taxpayer money, which makes this a government issue.

Them: She’s milking this for publicity.

Them: She doesn’t care about free speech. She’s getting paid.

Me: The courts have held that you may not “unduly burden” the right of free speech, i.e., impose special requirements upon a controversial speaker. That’s why the city of Miami lost in federal court in 2003 after it billed a promoter for the cost of extra security required to bring a band loathed by some in the Cuban exile community to the Miami Arena.

Here’s the bottom line: I don’t care whether it’s Castro’s favorite band playing in downtown Miami or a viperous harridan speaking at Berkeley. It wouldn’t matter if it were Louis Farrakhan at Ole Miss or Bernie Sanders at the High School of Economics and Finance just off Wall Street. The right to free expression is either secured for all or it’s guaranteed to none.

So here is what should offend you even more than Coulter, particularly if you live in a place like Berkeley, with its 121,000 people and 170 police officers. A bunch of thugs just established that you can bully a public institution in a relatively small town into disinviting a controversial speaker. Which of our other freedoms will they come after next?

Coulter called Wednesday “a sad day for free speech.” This next sentence will cause physical pain for some of you to read, but you need to just the same:

Editorial: Raise the age for juveniles