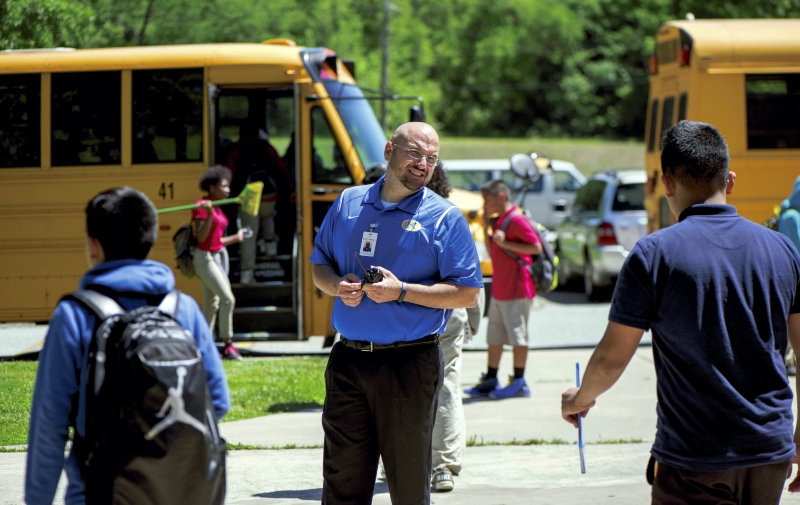 SALISBURY — Principal Michael Waiksnis, one of a team of educators brought in to transform Knox Middle School, will say his farewell to the school on June 30.

Waiksnis has accepted a job as executive director for middle and high schools with the Fort Mill, South Carolina, school district. His departure follows that of his first co-principal, Latoya Dixon, who left last June.

While the new job is a great professional opportunity, Waiksnis said, he is most excited that he will be able to spend more time with his family.

“I’ll have a 10-minute commute rather than an hour-and-20-minute commute. So I’m really looking forward to — I kind of joke around — seeing my kids in the daylight because when I get home it’s dark and when I leave they’re sleeping,” he said.

According to a previous Post article, the city agreed to pay Waiksnis and Dixon $15,000 each per year separate from their employment with Rowan-Salisbury Schools, which paid them $70,000. The contract with Catawba College was for an additional $35,000 each per year. On Aug. 2, after Dixon’s departure, the City Council agreed to pay Deputy Principal Christopher McNeil $11,000 for the 2016-17 school year.

Waiksnis has completed three of the four years on his contract with the school system. For the past two years, he has been teaching at Catawba as an adjunct professor after that contract ended.

RSS Superintendent Lynn Moody said Waiksnis and Dixon were hired to help guide the school through a period of transformation. At the time, Knox was a low-performing school and had gone through four principals between 2008 and 2013.

“So we really wanted to do things differently,” Moody said.

In the past three years, Knox has lifted itself off the state’s low-performing list. It has had record academic growth, seen increased attendance among students and teachers, and has become a magnet program.

Those are successes that Waiksnis and Moody say they aren’t worried will falter after Waiksnis leaves.

“Everything we’ve done and put in place are things that we think are sustainable. …” Waiksnis said. “It’s really not in the best interest of a school to are dependent on a single leader. So we tried to put things in place that can be carried on by the next person or the next team to lead the school. So everything we’ve done, we’ve had that in mind — is this going to be sustainable past just the current person?”

And the vision for the school has moved well beyond the administration.

“The school belongs to the community and those teachers who have bought in and done all the training. … So it’s bigger than one person. … It’s bigger than Dr. Waiksnis, and it will continue,” Moody said.

One of the key ideas behind having a co-principalship was a sense of stability, Moody said, so that ideas and a school vision could be cultivated and passed on. That is still the case for Knox because  McNeil is staying on and has spent the past year under Waiksnis’ wing.

“So that will be a joint administration,” Moody said of the next school year. “All of our plans that we put into play will still continue.”

In the past year, Waiksnis said, McNeil has been an “integral part” of the magnet program in addition to starting and running a Saturday school program and after-school opportunities.

Even though the new Knox Center for Accelerated Studies is only on its first leg, administrators are sure it will persevere. Teachers currently running high-school-level courses are still certified. Moody said she thinks McNeil and the next principal will continue to push for other pieces of the program, such as an extended school day and internship opportunities.

And by August, Knox will have a new co-principal — something Waiksnis said he believes is still needed.

“I think the complexities at this school are probably too demanding for almost any principal,” he said.

The system’s other co-principalship, at Koontz Elementary, also is losing an administrator in June. Yakisha Clemmons told school officials that she is leaving on June 30. Moody said she doesn’t see the turnover as a failure of the model but as a reflection of how difficult it is to find and retain principals — and teachers — statewide.

“I think you have to try different things to get different results,” she said of co-principalships.

The model is not perfect, she said, but she plans to continue to learn and try new things as the district moves forward.

The search for a new principal has already begun, with surveys of parents, faculty and students. Moody said the Knox community is looking for stability, someone with strong people skills, someone with a solid background in and knowledge of curriculum, and someone who can continue the vision begun by Waiksnis and Dixon.

Waiksnis said he would like to thank the community for its support over the past three years. While he’s proud of the progress at Knox and is looking forward to his new job, he said he is sad to leave.

“It’s kind of bittersweet,” he said.