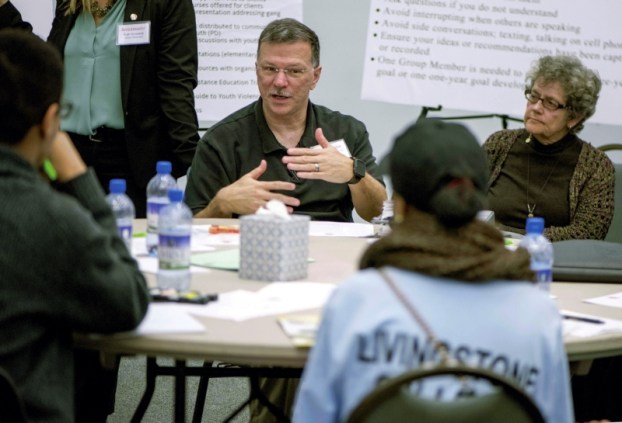 SALISBURY — Crime is on the decline in the city, and it’s in part because of the community, Salisbury Police Chief Jerry Stokes said Tuesday.

Stokes presented the information, he said, because Councilman Kenny Hardin asked to see some statistics on crime. He said he had already begun preparing to gather those numbers.

“I think it really just shows that the community and the police are really moving in a very good direction. We are very optimistic that this will continue in this direction and that we will continue to work together with the community seeing these very positive movements,” Stokes said.

The statistics also show that, although overall crime has decreased, weapons offenses are much higher this year compared to last year in the first quarter. There were 14 weapons offenses in 2016 from January through March; this year has seen 34 offenses.

Some things have bumped up a bit, Stokes noted, including more reports of theft. The primary reason is an increase in shoplifting, he said.

He said the city is not out of the woods as far as gun crime is concerned, but the numbers overall are showing a positive direction.

He said even with some of the police staffing concerns, “the community and the Police Department are very much working together to address what’s going on in the community.”

Stokes said Capt. Melonie Thompson has been deliberate in getting officers to focus on community policing. He said the department is not doing as much as he would like because of staff shortages, but officers are doing as much as they can.

“There’s much more attention by the community — you know, what we can do to help alleviate some of this. Maybe there’s more focus by parents on what their kids are involved in,” the chief said.

Calls for service have gone down, but that appears to be related to proactive patrols, he said. The top five call categories — 911 hang-ups, vehicle stops, suspicious people or vehicles, alarms and miscellaneous calls — have all decreased.

Stokes said a few months ago, it seemed as though Salisbury had more crime-related problems than neighbor cities. But he said criminals don’t respect city borders.

“Each community has their own challenges and things that they have to work on,” he said. “It’s a very fluid situation when you’re talking about crime and how that occurs in the community. So there’s lots of things that come to play in that and, unfortunately, it can happen anywhere and we do see it happen anywhere.”

As Stokes presented the statistics to the City Council on Tuesday, he drew doubts from a few people in attendance about whether crime in Salisbury has actually decreased.

Gerald Pinckney, who was shot 16 times in August, made his doubts known during the public-comment period.

“There’s no truth to any of those graphs I just saw,” Pinckney said. “There’s been more shootings, more drug activity, more gang activity over the past three months than I’ve seen in Salisbury since I’ve been here, in 2010. So, my question to you guys is: What are you truly going to do to stop the violence?”

Pinckney said he was one of two people shot in the August incident, which occurred near Franklin and North Caldwell streets on a Saturday night. Pinckney said he got into “an altercation” but never expected a gun to be used.

Scars from the incident mark Pinckney’s body. No one has been arrested in connection with the shooting, he said.

Pickney says his father was robbed last week. It took police 45 minutes to respond, he said.

He said the lack of arrests and long response times contribute to his lack of trust for police.

Stokes said police officers have made arrests that are connected to gang activity and expressed optimism about the future.

“We are going to see some real contributions from our federal partners. We’ve seen a lot up to this point, but they really have committed quite a few additional resources that we will see here going into the summer,” Stokes said in an interview. “I don’t know that there’s been a big change, but maybe their grip that the gangs had had on the criminal element, maybe that’s loosening a bit and they’re losing their effectiveness. Again, they’re a criminal organization, and if they lose their effectiveness we should see crime go down.”

By Rebecca Rider rebecca.rider@salisburypost.com SALISBURY — Principal Michael Waiksnis, one of a team of educators brought in to transform Knox... read more