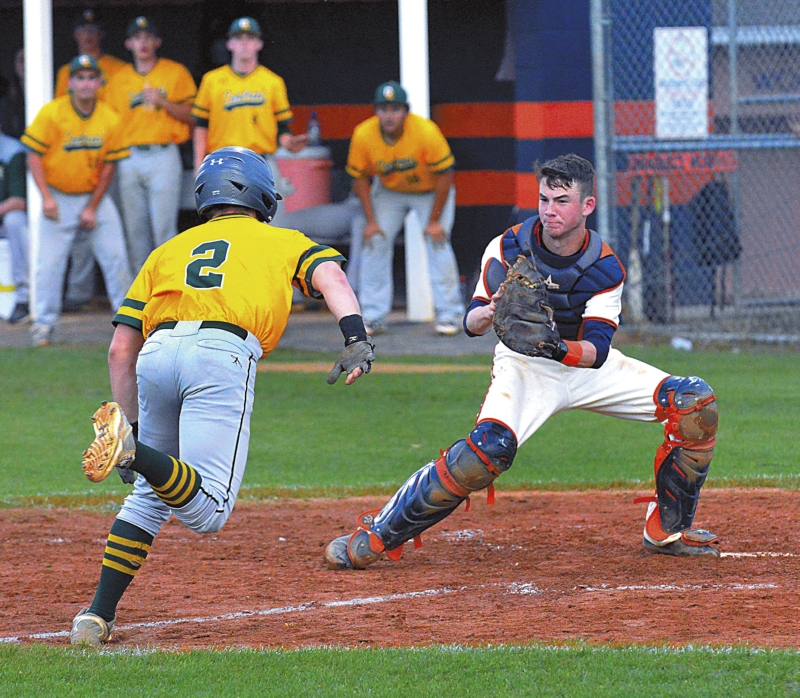 Wayne Hinshaw/for the Salisbury Post Central Cabarrus’ Jacob Allred (2) is about to be tagged out at the plate by Carson catcher Garrett Alewine during Wednesday night’s SPC Tournament semifinal in China Grove. Alewine just received a great relay throw from shortstop Owen White (not pictured).

CHINA GROVE — With a team batting average of just .259, Carson’s Cougars have been forced to find other creative ways to win baseball games this season.

Wednesday night at home, the Cougars relied on the bulldog-like pitching of junior Cameron Prugh, a perfect defense and various “small ball” at-bats to produce an impressive 5-0 win over Central Cabarrus.

“It was a complete team effort,” said winning pitcher Prugh (2-2). “We only had a couple of hits going into the fifth inning and we ended up with 10 hits and five runs and some great defense.”

Prugh was locked in a scoreless pitching duel with the Vikings’ junior righty Steven Kutay (4-4) in the middle of the fifth when his team found a way to break out on top. Catcher Garrett Alewine laid down a perfect bunt toward third with two outs and legged it out for a single. The throw to first sailed high, allowing Alewine to reach second.

Sophomore Cole Hales, who had a stellar defensive game at third base, drove in the first run by punching an opposite field duck snort to right.  Hales went to second base on the throw home, then scored on a bloop single to center by Logan Ridenhour, making it 2-0.

Carson added three big insurance runs in the bottom of the sixth on an Owen White single, a bunt single by Ben Shoaf and then a booming two-run triple to left-center field by Luke Barringer. Barringer’s shot, off reliever Joe Muhonen, was the hardest hit ball of the night for the Cougars and it gave the home team a 4-0 lead.

Brycen Holshouser then capped the big rally with an RBI-single to center field, scoring Barringer, capping the scoring.

Prugh, lived on the edge throughout the game, leaving the bases loaded in the first and third frames with a couple of timely strikeouts. He was challenged in the top of the seventh once again when Central (12-13) loaded the sacks one more time. With two outs, Gavin Canipe collected his third hit of the night, followed by a Camperon Kepley single and a Jake Rowden walk. But Prugh preserved the five-hit shutout by getting Cole Foster to pop out to first base.

“I did leave the bases loaded three times,” Prugh said, “but I was able to get some key ground outs and made some good pitches when it counted. Mainly, we just played great defense. It was a complete team effort.”

Hales provided a majority of the defensive gems at third base with six putouts, including a pair of diving stops. “I was able to play good tonight and trusted my arm” Hales stated. “Our defense has won a lot of games for us this year including tonight.”

Winning coach Chris Cauble was complimentary of his defense as well as the way his players executed the bunts that produced the runs they needed for the win. “That is the way we play,” Cauble said. “I knew it was going to be a close game tonight (the two teams split close battles in the regular season). It took a little bit of different stuff to get us going tonight, but you still have to execute it and our players did a great job of executing.”

The highlight play of the game, and possibly a game saver for the Cougars, came in the top of the fourth with the score still at 0-0 and two outs. Jacob Allred barely beat out an infield single to deep short, then sprinted around the bases when Canipe crushed a double near the corner in left field. Barringer two-hopped the throw to shortstop White, deep behind third base, as Allred closed in on home plate.

White, the Cougar ace pitcher who won Tuesday’s SPC opener over Cox Mill, had one more 90 mph throw left as he drilled a perfect strike to Alewine at the plate. Allred was tagged out easily and the shutout was preserved.

Cauble called the play “phenomenal” while Prugh labeled it “unbelievable” but White, a South Carolina commit, was a little more matter of fact about his laser throw. “I had to give it a shot, so I just let one go,” White said. “He (Allred) was moving pretty good, so I had to put it on the spot and Garrett made a great tag.”

The Cougars now face neighboring South Rowan at 7 pm Friday for the SPC Tournament championship, and hope to improve their seeding in the state 3A playoffs next week. Both South and Carson, who split their regular season league games, are assured of making the state playoffs field but Cauble said, “first we want to win a league championship. It has been a while and we need another one.”