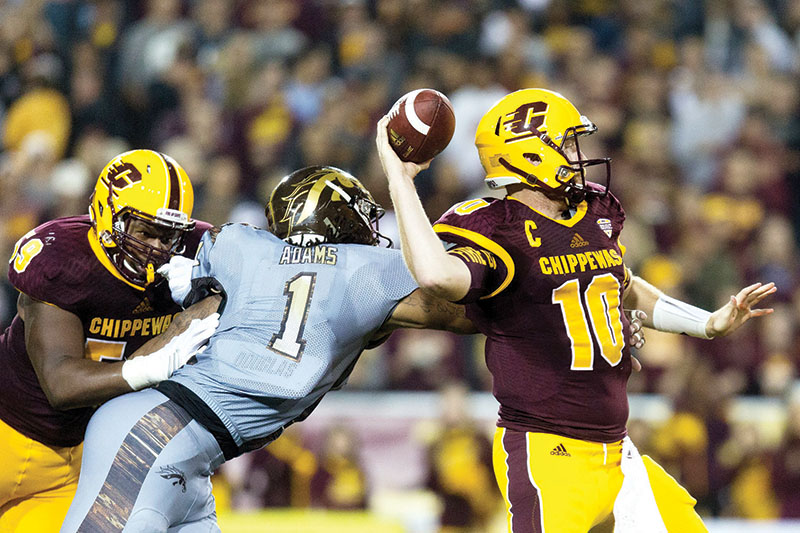 Saturday’s seventh round, the final round of the NFL draft, was sprinting by much too quickly for former Salisbury High phenom Keion Adams.

While teams can take up to four minutes to make seventh-round picks, they were rattling them off in a hurry. The list of official draftees was nearing its conclusion, and Adams was on the phone with Chicago Bears outside linebackers coach Brandon Staley, and starting to sweat.

Maybe he was going to be a free agent instead of a draft pick.

“I wasn’t upset, but I was disappointed that I hadn’t been picked,” Adams said.

Calls had been rolling in Adams’ direction all day, teams assuring him they knew who he was and what he could do, re-assuring him that he was on their list. But deeds mean more than words. No one had pulled the trigger.

Adams had been able to respond to some, but not all, of those calls and texts. When he saw another call coming in, he apologized to Staley, put him on hold, and answered.

A few seconds into his conversation with Tomlin, Adams started grinning. Then he saw his name scrolling across the television screen. The Steelers had used the 248th overall pick on Adams.

“Oh my gosh, oh my gosh,” was about all Adams could say at that life-changing moment.

“Then I just kind of fell apart for a few minutes,” Adams. “It was emotional. All the work I’ve put in over the years, and to see it pay off with this kind of opportunity. I’m overjoyed, I’m excited, and I’m blessed.”

Adams’ earliest football memories are of watching his father, Desmond, playing semi-pro football. Desmond was an explosive running back at Salisbury High in the mid-1990s, starred for the Hornets’ basketball team and was the 1996 2A state champ in the 100 meters.

In high school, Keion played all over the place for strong football teams and he played on both sides of the ball for a program that rarely asks athletes to play both ways. He was a regional champ in the shot put with a heave of 51 feet, 9 inches. He flung the discus 125 feet. In basketball, there wasn’t much consistency from him in a 341-point varsity career, but he was occasionally spectacular.

Wester Michigan University in Kalamazoo turned out to be the place where Adams put it all together. He didn’t redshirt. He was a contributor for two seasons and a standout his last two seasons. In 50 college games, he had 32 tackles for loss, 13 solo sacks and five forced fumbles. He was a big reason Western Michigan was one of the nation’s fastest-rising programs. The Broncos were 1-11 his freshman year. They were 13-1 his senior season.

The lone loss as a senior came to Wisconsin in the Cotton Bowl. Wisconsin’s T.J. Watt, like Adams, an outside linebacker, was Pittsburgh’s first pick in this year’s draft.

After a solid Pro Day at Western Michigan, Adams was invited for pre-draft personal visits by the  San Diego Chargers, Pittsburgh Steelers, Indianapolis Colts and Green Bay Packers. Logically, one of those four seemed most likely to draft him.

“Those teams just wanted to get to know me better, find out what kind of person I am,” Adams said. “I had several conversations with (Pittsburgh outside linebackers coach) Joey Porter, but I really had no idea it was going to be the Steelers who took me. But I hoped it would be. If I could have picked where I wanted go to, I would’ve picked Pittsburgh. It’s a chance to learn a lot from Porter and from (38-year-old veteran) James Harrison.”

Pittsburgh is also where Javon Hargrave played as a rookie last fall. Hargrave is a graduate of North Rowan High, a school 4.6 miles from Salisbury High, and Salisbury’s fiercest rival. But there’s enough of an age gap that Hargrave was a high school senior when Adams was a freshman, so they’re fast friends, not mortal enemies.

“Javon has given me a lot of words of encouragement and congratulations,” Adams said. “I’m looking forward to being his teammate. He’s told me a lot about Pittsburgh. He said there aren’t any better fans and there’s no better environment to play football in.”

Adams was a defensive end in college, but at his size, his pro hopes will depend on making a successful transition to an outside linebacker role in a 3-4 defense. He has the burst and speed to rush the passer or to drop into coverage. Adams also could find steady work on special teams, where his blend of power and speed could be useful to the Steelers.

Adams’ mother, Tanika Burnon, drove up to Michigan right after the draft to support Keion. He’s tried to keep his feet on the ground and stay business-like, but he admits his heart has been pounding.

“It’s a very crazy time for me,” he said. “Now I’ve got to focus on going to work and making the team.”