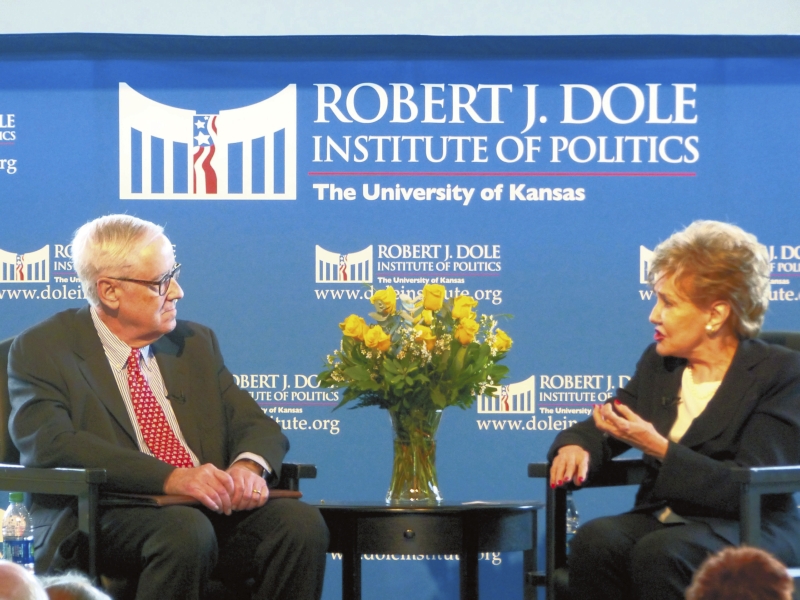 Former U.S. Sen. Elizabeth Dole, a native of Salisbury, speaks Sunday with Bill Lacy, director of the Bob Dole Institute of Politics during the inaugural presentation in the Elizabeth Dole Leadership Lecture series at the institute. Photo by Elvyn Jones/Lawrence Journal World.

LAWRENCE, Kansas — The United States is “very close” to electing a woman to the Oval Office, one-time presidential candidate Elizabeth Dole said to a full house Sunday at the Dole Institute of Politics.

Dole launched the Elizabeth Dole Women in Leadership Lecture series at the institute named for her husband with a 90-minute presentation. Her appearance included a conversation with Dole Institute Director Bill Lacy and an audience question-and-answer session.

Dole shared stories of her courtship, marriage and political partnership with her husband, Bob Dole, and memories of her own career of firsts for her gender, which include serving as a senator from North Carolina; a Cabinet officer in two separate administrations — as secretary of transportation under Ronald Reagan and secretary of labor for George H.W. Bush; a Federal Trade Commission member; and the first woman president of the American Red Cross since its founder, Clara Barton.

Even as she recounted her challenges and accomplishments in those positions, Dole recalled “that was how it was then” memories of those who discouraged her career ambitions. Among those were her parents, who expected the young 1958 Duke University graduate to settle in her hometown of Salisbury, N.C., and get married. She “marched to a different drummer” and wanted to see more of the world. She took a job in Boston, which opened other opportunities that didn’t thrill her parents.

“They didn’t understand at all,” she said of her decision to go to Harvard University Law School. “I think my mother thought she was losing a daughter.”

She found at least one of her Harvard Law School classmates to be even more blunt about her ambitions.

“My first day of law school, one of my male classmates came up to me and asked, ‘Elizabeth, what are you doing here? Don’t you know there are men who would give their right arm to be here? Men who would use their legal education,’” she said. “That man is now a senior partner in a Washington law firm, and every now and then I tell that story about him. In fact, I love to tell that story about him. Men will call up and say, ‘Tell me I’m not the one.’ I’m going to let them all sweat it out.”

Dole put those experiences in perspective with the observation that it has been less than 100 years since women won the right to vote and only 38 years had passed since the 19th Amendment was approved when she graduated from Duke.

“We are making progress,” she said in response to a University of Kansas student’s question of when the country would elect a woman president. “I think it will be very soon. Hillary (Clinton) worked very hard in her campaign. I see so many talented women who are going into the workforce now, but we still face subtle discrimination.”

In a critique of her own 2000 presidential campaign, Dole said it suffered from a late start.

“I was third in the Iowa straw poll and outpolled Al Gore in 1999, so maybe if I had started earlier,” she said.

Dole said she had to prove herself to a skeptical campaign adviser that she was a viable political spokeswoman in her own right when her husband was the 1976 GOP vice presidential nominee. That was partly because she was a “policy wonk” and not a political person before that time, she said.

In recalling their courtship before their 1975 marriage, Dole said the Kansas senator waited until a third long phone conversation to ask her for a date.

“I loved that because you knew he was a little shy and not some man chasing women around Capitol Hill,” she said.

National politics needs more men like her husband now — men who are both principled and willing to work with members of the other party for the good of the nation, Dole said. She decried the current atmosphere in the Senate, in which one member has called another senator a “liar.” Bipartisanship was a hallmark of her and her husband’s careers in the Senate, she said.

“We loved being bipartisan,” she said. “You are not going to get anything done unless you find that common ground.”

She’s witnessed the payoff of across-the-aisle friendships since she left political life, Dole said. Democratic U.S. House Minority Leader Nancy Pelosi has been supportive of the Elizabeth Dole Foundation, which was founded in 2012 to aid the “hidden heroes” of caregivers for wounded veterans.

“She’s been there whenever we need her,” Dole said of Pelosi.

The foundation commissioned the Rand Corp. to document the depth of the caregiver crisis, Dole said. It found 5.5 million caregivers perform such tasks as dressing, feeding and bathing wounded veterans and that 1.1 million of those wounded veterans were in conflicts since Sept. 11, 2001, she said.

Dole said she is thankful for the city of Lawrence’s decision to become a “Hidden Hero City” and committing to identifying wounded veteran caregivers, the resources available to them and gaps in needed services.

Reprinted with the permission of The Lawrence Journal World.

NC DOT Secretary will speak at May chamber breakfast