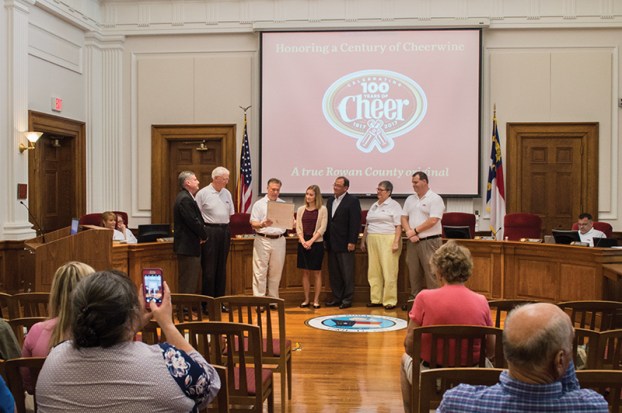 Josh Bergeron / Salisbury Post - Rowan County Commissioners on Monday present representatives of Cheerwine with a proclamation honoring the company's 100 years of operation. The presentation occurred during the regularly scheduled meeting.

SALISBURY — The Rowan County commissioners on Monday celebrated a century of the soft drink born in Salisbury.

State Rep. Harry Warren, R-Salisbury, wondered aloud what stories Cheerwine might be able to tell if it could talk.

“Can you imagine if Cheerwine could talk what it could share with us about what it’s seen in it’s lifetime — world wars, Korea, Vietnam, Afghanistan and the turmoil seen economically over the years,” Warren said. “The fact that it made it through a depression and the Great Recession and is still going strong today is a real testimony to the alluring appeal of Cheerwine.”

After the remarks, Brock presented a proclamation from the N.C. General Assembly that was signed by Lt. Gov. Dan Forest, Senate President Pro Tempore Phil Berger and himself.

Wearing identical Cheerwine polo shirts, the commissioners followed with a proclamation of their own.  The document noted that L.D. Peeler created the soft drink amid a sugar shortage during World War I. Through its history, the drink has been sampled by three presidents during visits to North Carolina — Dwight Eisenhower, George H.W. Bush and Barack Obama. And 100 years after its creation, the company is still family-owned.

Just before Edds presented the proclamation, commissioners shared their personal stories about the soft drink. Commissioner Craig Pierce, a local business owner, recalled the atmosphere of Cheerwine’s offices when he was hired for a remodeling job.

“I had the pleasure of helping the Ritchie family remodel their offices, and the one thing that struck me as unique among all the businesses I’ve worked with over the 30 years I’ve been in business is the family-oriented atmosphere out there,” Pierce said. “Everybody enjoys working there. Everybody treats everybody like a brother and sister, and I’ve never seen that before in any other corporation ever.”

Although the company has grown, Cheerwine hasn’t strayed from its roots as a family-owned and -operated company, Pierce said.

After the presentations, the commissioners called a brief recess to enjoy drinks and desserts made with Cheerwine before moving on to other business.

A large celebration for Cheerwine will be held on May 20 downtown Salisbury. A barbecue competition, local food booths, bands and other entertainment is on tap. Admission will be free.