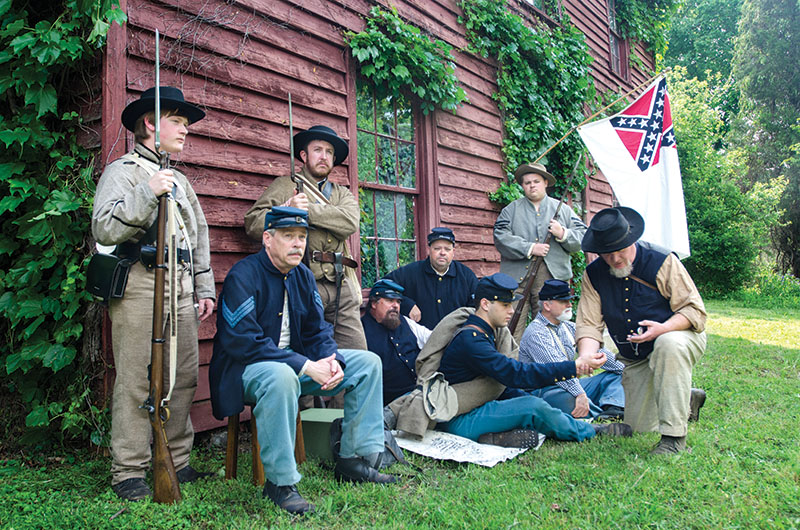 Re-enactors of all ages were present Saturday at the Garrison House property, many with ancestral ties to the area and the old Confederate Prison. The group, from the 28th NC Troops Reactivated, portrayed prisoners and Confederate guards at the site.

The Garrison House is the only remaining structure of the old Confederate Prison, a part of Salisbury history many find painful to face. From 1861 to 1865, 16-acres of land and a 50-by-90 foot abandoned cotton mill were used to house 10,000 prisoners. Conditions were deplorable, with a constant influx of prisoners being offset by a death rate of 28 percent.

For participants and local history enthusiasts, the free event was meant to bring awareness to the property, recently acquired by the Rowan Museum. Specifically, coordinators sought to promote interest in the preservation of the historic site and former guardhouse.

The Garrison House was donated to the Rowan Museum in late 2016 by Clyde, a Salisbury artist formerly known as Clyde Overcash.

“Everybody has Civil War history,” said Clyde. “Whether you want to know it or not, it affected you in some way. It’s part of the history of the United States — where we are today is because of the Civil War.”

Re-enactors donned accouterments accurate to the time period, pieces created by sutlers in manners true to the era.

“It’s not a cheap hobby,” said Stephan Harris, a Union soldier impersonator. “A rifle alone is about $900, but they’re exact replicas.”

When not lounging in the shade of dog-tents and hut-like shebangs, many contributors shared stories of their ancestral ties to the prison. Matthew Gamble, a younger member of the group, is connected to 1864 prison guard John Gamble, of the 4th North Carolina Senior Reserves. Brian Duckworth, another 28th NC Troop member, is related to Richard Alexander McCorkle, of the 52nd North Carolina out of Lincolnton. McCorkle served light duty in the Salisbury area during the war.

Other stories shared during the event illuminated the realities of war-time life for Salisbury citizens and prisoners.

“The Presbyterian church took the carpets out of the churches and gave them to the prisoners,” Clyde said. “Everybody got a yard, one piece of carpet. They would put these down on the ground and dig and make a house like for a toad, and they would get under it for the winter.”

Jimmy Rhyne, portraying a Union soldier while his son portrayed a member of the Confederate guard, spoke of how officials managed the astounding death toll.

“They would take people that died and take them down track, then outlay them in a cornfield. People may ask ‘why do we have a national cemetery in Salisbury?’ That’s why, because that started the graves.”

Near the close of the war, prisoners were relocated to different locations, and the prison was repurposed as a supply depot. It and large portions of the town were then burned at the command of General George Stoneman, mere days after the South had surrendered.

For Clyde, this delay in communication and the resulting destruction of many Salisbury structures raises the ultimate question.

“What would be here today if Stoneman had gotten word and said don’t burn anything? We’d have as much as Charleston and everybody else. Only this house is surviving.”