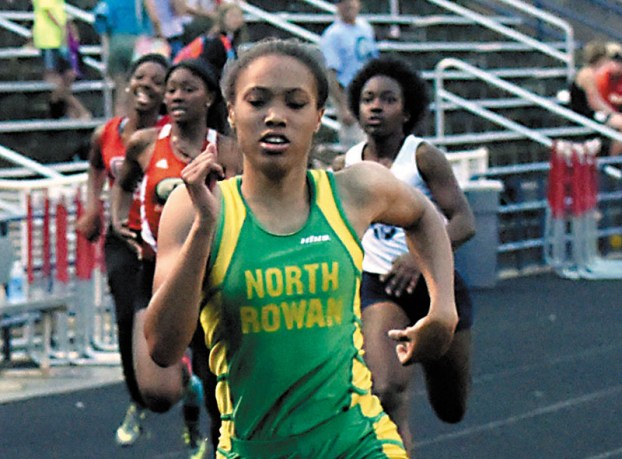 SPENCER — Payton Russell has won a lot of sprints over the years, so many victories in so many events that they would seem to jumble together, but that’s not really the case.

Ask Russell to name her best race, her favorite race, her most memorable race, and it only takes her a split-second to respond. That would be her quick 400 meters on May 16, 2015, at North Carolina A&T’s Belk Track  in Greensboro.

Russell won her first 2A state championship that day —as a sophomore —  burning those 400 meters in 55.70 seconds.

“That race stands out for me and it was more than a state championship,” Russell said. “It was a PR for me and my time was the meet record.”

Russell reached the finish line first in 11 of the dozen 100, 200 and 400 races contested in the Rowan County Championships during her high school career, and she’s annually made North Rowan difficult to beat in the 4×400. Running the first leg of those 4x400s like a Ferrari, she blew open a substantial lead for her teammates.

She’s been the Rowan County Female Track and Field Athlete of the Year as a sophomore and junior and is a frontrunner for a three-peat as a senior, contingent on what transpires in the upcoming conference, regional and state meets.

Russell has been faced with making a college decision in recent months. Many schools wanted her, but her choice really came down to a two-horse derby between Charlotte and North Carolina A&T. She decided on North Carolina A&T’s Aggies for several reasons. One big reason is that it’s the place she ran her favorite race and the place where she’s won four outdoor state championships in her stellar career.

Russell is a family-and-friends person and wasn’t interested in visiting some big-name colleges far away that wanted her. North Carolina A&T is the place where she’s most relaxed, most comfortable and most confident. She signed officially with the Aggies last week.

“North Carolina A&T recruited me heavily since last October and November,” Russell said. “My AAU coach (Tim Dunlap) know the coaches there, and that was a factor. I like the campus. I really like the Greensboro area. Plus, I really wanted a medium-sized school, not a large school. I’m kind of shy. I’m not the biggest talker in the world.”
Duane Ross, who directs the A&T track programs, has great credentials. A native of Gaston County, he was an NCAA 110-meter hurdles champion at Clemson.

While Russell already has won two 400s, a 4×400 and a 200 state championship outdoors in Greensboro, she also roared to a title in the 300 at the indoor state meet in Winston-Salem in February.

She’s exceptional in all the sprints, with the 400 her best event and the 200 next. She has a history of being a relatively slow starter out of the blocks, and against elite competition, she doesn’t always have enough steam to catch up in the 100. But in the 200 and 400, well, she gets faster as she goes, and she’s hard to beat.

Her story starts in Pennsylvania with two parents who were athletes. Her mother, Alisa, ran track and played basketball in college. Her father, Thomas, was a football/basketball guy in high school.

Family ties brought the Russells to Rowan County a while back. Payton’s brother Aundray, was a  fine sprinter for the Cavaliers, taking third in the 200 meters in the 2002 2A state meet in Raleigh.

Aundray’s career, going to his Rowan Express AAU meets, was where Payton’s own interest in track was born.

“When I was 7, I realized that I was pretty fast, but not that fast,” Russell said. “That’s when I started wanting to work my way up.”

The turning point in her career, the summer she realized that her track future far exceeded her possibilities in other sports, came when she was 9. North legend Robert Steele took the local youngsters to the 2008 AAU Junior Olympic Games in Michigan, and Russell placed fourth in the 400, fifth in the 200 and eighth in the 100. There were a lot of victories for Russell that summer, and with the help of a lot of coaching and family support, she’s never looked back.

The thing that isn’t obvious right away from Russell’s soft-spoken exterior is that when she walks on the track, she’s a different person. She becomes a 5-foot-7 monster. She’s ready to compete, determined to score 40 points for the Cavaliers.

Russell makes the honor roll like of a lot of North’s senior athletes who are moving on to college. AD Ben Hampton said that North’s recent cluster of signees are all at least 3.5 GPA students.

Russell is taking on a challenging major. She plans to study engineering at North Carolina A&T.

“They’ve got a top-of-the-line engineering program as well as a top track program,” Russell said. “Everything about A&T felt right.”

By Mike London mike.london@salisburypost.com Three years ago, this was Chris Smith’s time. All the dreams, all the work, all the... read more