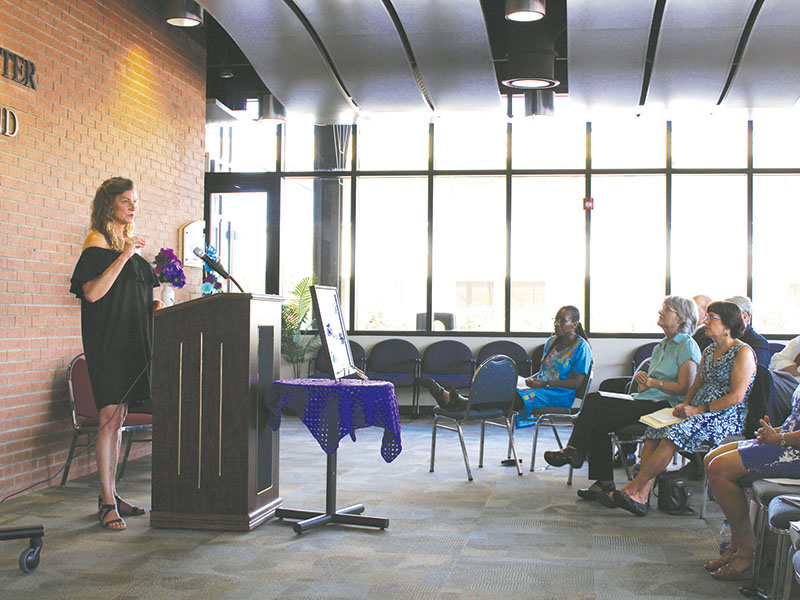 Andie Foley / Salisbury Post - Katy Temple shares her story with the audience during "Break the Silence." Katy is a sexual assault survivor who now works to empower and educate others.

Together in partnership with local organizations and churches, the Family Crisis Council of Salisbury-Rowan closed April with a worship service at Hood Theological Seminary.

Statistics surrounding sexual assault are staggering. Every two minutes, someone in the United States is sexually assaulted. In North Carolina, one in five women will be sexually assaulted at some point in her lifetime. Moreover, a rape occurs ever three hours and 52 minutes in our state.

Unfortunately, less than 10 percent of sexual assaults are ever reported to the police. Therein, 97 percent of rapists will never spend a day in jail.

Through “Break the Silence,” event coordinators sought to open up dialogue regarding this problem and its impact on victims. The focus seemed to be shifting blame away from those who have experienced abuse and instead learning how to listen and respond.

“Many of the women that call our shelter say they just want the abuse to stop,” said Renee Bradshaw, executive director of the Family Crisis Council, “so why do they stay?”

The reasons why women and men stay in abusive situations are as many as they are diverse. Some stay for financial support for their children, others for lack of alternative living arrangements. Victims can stay for love and loyalty of their abusive partners, or they may stay because they blame themselves for what’s happening.

“Abuse is not about reasons,” Bradshaw said. “It’s about power. It’s about control of your partner, and it works.”

In a worship service that included hymns led by Catawba College’s Casey Rae, litany and art composed by Dr. Mary Love, stories from survivors and a sermon by Rev. Carol Hallman, “Break the Silence” informed audience members that healing for those affected can happen.

Representative of this healing was Katy Temple, sexual assault program manager with the Crisis Council. At 25 years old and two years into her now 25-year sobriety, Temple was raped by a stranger in her own home.

Temple noted that this tendency to prey on the weak leaves many with self-esteem issues vulnerable.

In the midst of assault, the brain naturally triggers one of three responses: fight, flight or freeze. For the unsuspecting victim, this response is involuntary and uncontrollable. Temple, like many, froze.

“I was woken with a hand on my arm and a knife at my throat and the words ‘do what I say, or you will die,’ ” she said. “At that moment, I was rendered completely powerless.”

Temple’s harrowing experience would take her years to overcome, with emotional and physical trials abounding. A stray touch could send her in to fits, and playing games like hide-and-seek with her two children would trigger residual panic from her experience.

Years after her trauma and well into her recovery, Temple experienced further turmoil as her attacker was identified and later convicted. The resulting job loss from her emotional distress would give her the opportunity to fully heal and, later, use her experience to help others in a similar situation.

As a sexual assault program manager, Temple now educates people on the importance of reporting these crimes and going to the hospital. She even heads a hospital response team, a group of trained volunteers that will accompany and empower victims through the testing and reporting process.

“I’ll tell you this, I was a rape victim,” Temple said, “but going to the ER and getting a kit done and taking a report out, that is how I started the road to being a survivor.”

The Family Crisis Council is a proud partner of United Way, and all services are offered free of charge. If you or someone you know has experienced assault, call the council’s 24-hour crisis line at 704-636-4718.