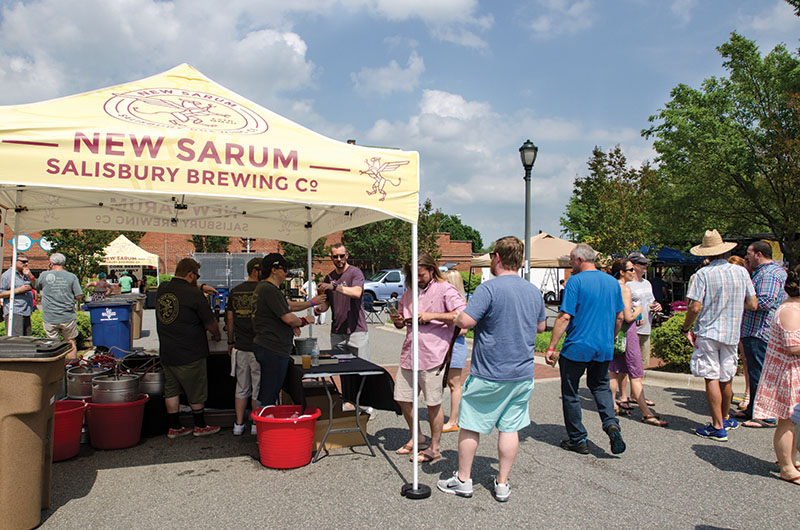 Owners of the New Sarum Brewing Company had hopes that their one-year anniversary celebration would bring the Rowan County community together. These hopes would be realized early as Saturday’s festivities began.

The event was held in celebration of the company’s first year in operation at their expanded brewery and taproom. To mark the occasion, brewers prepared their first bottled beer: their Bourbon Barrel Aged RoundHouse Porter. Co-owner Edward Moscardini said this release was partly responsible for the AnniBEERsary’s early turnout.

“Most people came because they knew we were doing the bottle release,” said Moscardini. “Literally as soon as we put the cash boxes in the tents we had a line.”

For purchasers, the porter would not disappoint. Made from one of the brewery’s dark, core beers, the drink was aged in Buffalo Trace bourbon barrels. This gave the already chocolate malt-flavored beverage hints of bourbon and vanilla in a smooth and only lightly-hoppy sip.

“We’re killing it right now,” said Andy Maben, New Sarum brewmaster, co-owner and the creator of the bourbon barrel-aged beverage. He was a flurry of constant motion as he took requests for the bottles and other one-off flavors. “This is the rare beer tent, and it’s been a constant, constant line.”

When asked to name his favorite creation, Maben related the question to choosing his favorite child. He did give nods to the Griffin Series’ Haze Fever and Princess Peach, as well as New Sarum’s Blood Orange Wheat.

Happy Roots, another local nonprofit dedicated to teaching children gardening, nutrition, and natural health and wellness, will receive a portion of the event’s sales, as well as proceeds from its raffle.

Moscardini and Maben both agree that microbreweries make great strides in bringing communities and business owners together.

“The breweries that were in the community that were already established, they just welcome you in with open arms and they share,” said Moscardini. “It’s very different from something like the restaurant business. … The craft communities here really want to help each other out. That’s refreshing.”

“(Craft beer) brings everybody together, no matter what,” Maben said, then continued with a grin, “I’m a firm believer that every corner should have a brewery on it.”

Smart Start’s Read to Me program takes children on…