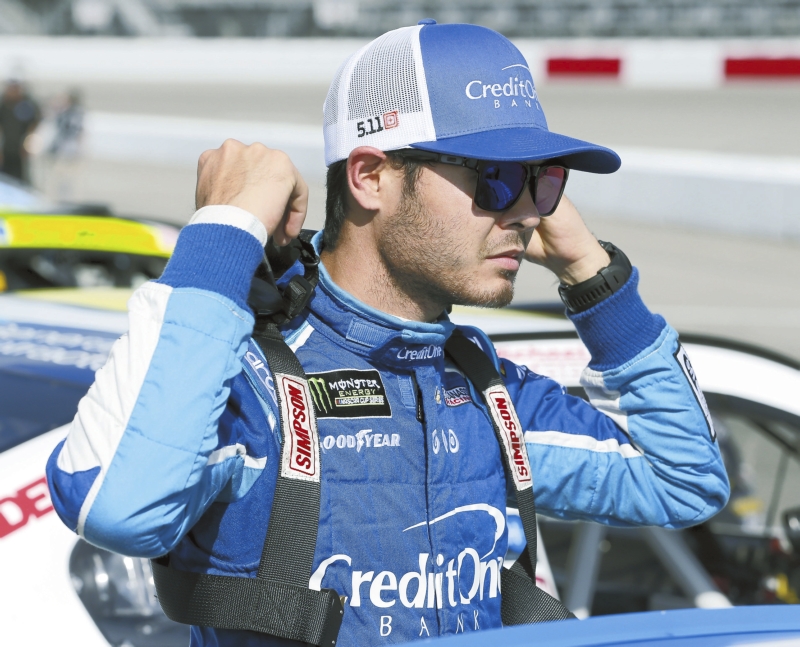 Kyle Larson prepares to get in his car prior to a qualifying run. (AP File Photo/Steve Helber)

RICHMOND, Va. (AP) — The exodus in recent years of some of NASCAR’s most popular drivers and a continuing decline in attendance and television viewership have cast a shadow over the series. It has also put a spotlight on the young guns needed to fill the celebrity void.

So far, at least on the track, so good.

Kyle Larson, 24, will take the Cup series points lead into Sunday’s race at Richmond International Raceway, with 21-year-old Chase Elliott hot on his heels. Joey Logano, 26, is fourth, sandwiched by the old men at the top in 36-year-old Martin Truex Jr., who is third, and 33-year-old Brad Keselowski, the 2012 series champion, who is fifth.

The alarm bells some are sounding after the retirements of three-time champion Tony Stewart, four-time champion Jeff Gordon, Carl Edwards and, at season’s end, Dale Earnhardt Jr., are ringing a bit hollow to Larson.

“I think NASCAR is in a great position with all the young talent that they have in the Cup series currently, and really in every feeder series below them,” the Chip Ganassi driver said Friday. “There’s a lot of young guys with great equipment and good backing. So, I think the competition will be good. And, there’s a lot of personalities, too, with people getting themselves out there on social media and stuff like that, showing their personalities.”

Larson, Elliott and Ryan Blaney are the three most often looked at as the future, perhaps because Logano is already in his ninth year as a full-time competitor. Others include rookie Daniel Suarez, who replaced Edwards for Joe Gibbs Racing, and Xfinity Series rookie William Byron. The 19-year-old who signed with Hendrick Motorsports won seven of 23 truck series starts last year and is driving for Earnhardt’s Xfinity team.

After seven races, Byron is second in the points race behind teammate Elliott Sadler. While Byron mostly deflected talk of replacing his boss in the No. 88 car, saying he wants to focus on learning as much as he can this year, Sadler has no doubt that Byron’s future is very bright.

“He’s one of these kids that’s got it, that’s going to Cup and understands it,” he said. “Once he learns these tracks and these races and setting your car up for the longevity of them and making adjustments and stuff like that, once he gets all that nailed, he’s going to win a bunch of races not only in Xfinity, but also in the Cup series.”

The impending loss of Earnhardt, though, comes at a difficult time for NASCAR as it fights to win back fans, or develop new ones less enamored with the sport’s deep history than by watching fellow millennials take it over.

The driver known simply as “Junior” has been the series’ most popular driver 14 years running, and Blaney said he can still use that popularity to have a huge influence in a new role as an ambassador and developer of up-and-coming racers.

“He has a very big impact on what people think, whether it is fans or in the garage area,” Blaney said. “Him talking up younger drivers or the sport in general is going to get his fans excited about the future of going forward even though he won’t be driving next year. What he says will be very important.”

So, too, will be the development of some new personalities that connect with fans, and Truex said that while he’s fine with being left out of the young guns conversation, he’s not handing a mantle over any time soon.

“There’s definitely a lot of young guys coming up, but I feel like I’ve got my best years ahead of me,” the 12-year veteran said. “They can keep talking about who’s retiring and who’s going to fill their shoes and hopefully I’ll be here to take a bunch of checkered flags home.”