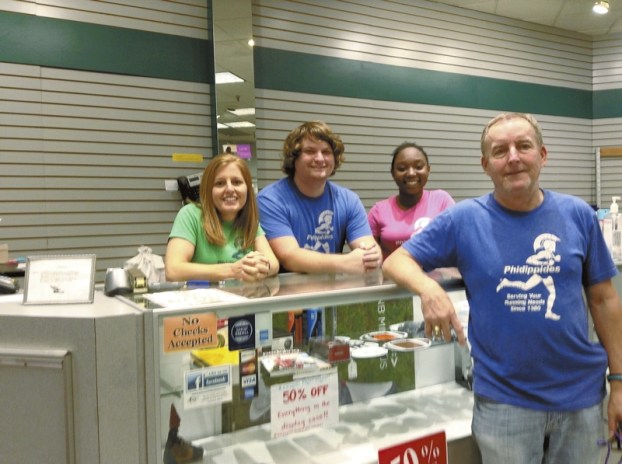 Running down memory lane as Phidippides store closes in Concord

CONCORD —  Keith Alley wanted to open a running store, but he had to wait until the Phidippides chain out of Atlanta let him have a franchise to make it happen.

That was in 1980. Former Olympian Jeff Galloway had capitalized on the running boom at just the right time, and Alley found immediate success when he opened his first Phidipiddes store.

Alley eventually owned four stores, including two more Phidippides. Those other stores eventually closed but the main store in Concord’s Carolina Mall had a niche with runners, and had significant offerings for other sports as well. Tennis, football, softball, baseball and swimming goods were regularly stocked along with team jerseys from all sports.

After becoming a junior high school runner back in 1967, Alley ran 43 marathons. The typical Phidippides owner was a serious runner as the chain grew to 90 stores.

The name refers to a Greek warrior who ran from Marathon to Sparta, a distance of 25 miles, to announce a battlefield victory over the Persians. After announcing the victory, he died then and there at the age of 40. Phidippides final words were “Joy to you!” The distance for the marathon was later moved to today’s official distance of 26.2 miles.

Even with all the other things going on in the store, it was a mecca for runners of all abilities. Alley and store manager Alisha Sheets reminisced about some of the long-time running customers. Many names from Salisbury and Rowan were on the list as they mentioned some special thoughts about Milton Matheny, Richard Kelly, Mike Julian, Don Henderson, Wayne Crowder, Eddie Grissom, Dennis Pope, Angie Pilkington and Crystal Karriker. Barry Troutman was the best of the group, rising from beginning runner to winning everything in sight.

Sheets came to Alley’s store as a high school sophomore and has remained for 27 years.

“She’s done nearly all the buying and has been such a big help,” Alley said. “She raised her baby in the store and I got closer to her because of it.”

Past employees brought some smiles, too.

“We used to have twice as many working as we do now,” Alleys said. “Over the years, children of some early employees came back to work with us too. There are just too many to mention but Victor and Chris Branscum, Helen and Matt Hobbie, Perry Gabriel, Jeff Monroe, Ashley and Stacy Davis and Jace Thomas come to mind. There are so many that I left out, but I hope they will forgive me.”

One special friend to both Alley and Sheets was long-time employee and veteran runner Eddie Frye. Frye and Alley went to school together in Concord. Alley said, “He was a big part of all of this. He left us several times, once for only half a day. But he kept coming back and has been working this last week.”

Customers have been coming by to make their final visits over the last month.

“They will say things like ‘we hate to see you go’ and ‘where am I going to get your expertise now?’” Sheets said. “It has been sad, and I will shed a few tears. Some just want a last hug and want to know where I am going. There are still some that I want to catch before we close.”

Alley said, “The remaining Phidippides stores are all independents. Our mall is struggling and we are losing tenants. The big box stores like Academy and Dick’s get preferential treatment from the suppliers. We can’t even get some of the same product.”

Sheets added, “Lately, back to school and Christmas were our best times of the year.”

Full-service, independent running and sports stores are disappearing and will be missed. Runners came to Phidippides to catch up not only on the latest shoes but to get training advice, race information and to view Alley’s Challenge Board, a list of top 10 locals at a certain distance. Often, they came just to hang around because it seemed right to do so.

“After 37 years, I did not want to close,” he said. “It wasn’t financially smart to stay open, but if we were just breaking even, I would do it. It is all bittersweet to think about Sunday. I will miss it. I couldn’t possibly have done something else to have made so many friends. We’ll have a party later.”

By Rebecca Rider rebecca.rider@salisburypost.com BOSTIAN HEIGHTS — There are some things in life that just won’t wait. Friday morning, a brand new... read more