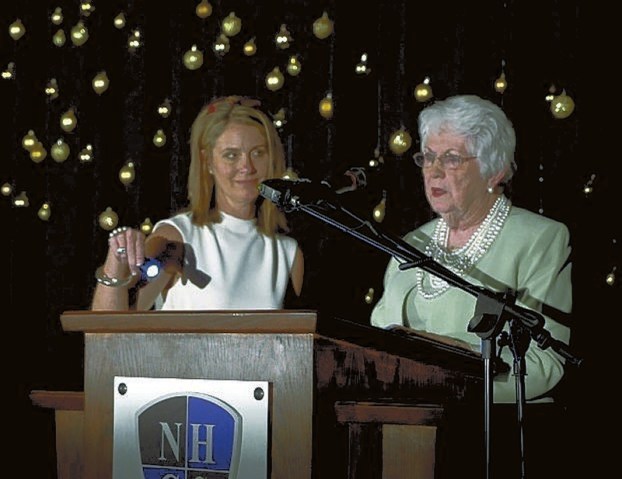 SALISBURY — It was only minutes into the evening. Maria Lowder, executive director of North Hills Christian School, had welcomed the 400 guests. Speaking in Latin, elementary students had just asked the blessing. Dinner was being served in honor of the school’s 50th anniversary.

Then, without warning, the unthinkable happened.

High winds had downed a power line, so the guests found themselves sharing a candlelight dinner.

But within half an hour, generators were humming, audio and video were playing, and the celebration carried on.

With theater lights back in action, students in the drama department reset the mood with a light-hearted skit, “Piece of Peace.”

Throughout the evening, stories were shared to honor the many people who made North Hills Christian School possible.

A video told of the vision of the school’s three founders — Dave Davis, Roger Harrison and William Ryburn — and their struggle to open the school. It then highlighted the success of former students, including interviews with Chelsea DiLoreto Wheeler, who founded a school in Nigeria, and JuYoung Shin Seo, now a finance manager with a hedge fund in Tokyo.

The video then focused on North Hill’s holistic approach to developing mind, body and soul, with a goal of producing confident kindergarten through 12th-grade students prepared to take on the world.

Next was a guest video appearance by Robert Smith, a former local businessman and charter board member. Proclaiming a theme of, “To God be the glory; great things he has done,” Smith shared stories about how the original property was obtained and how the name North Hills was chosen.

He described a business trip to Pennsylvania during which he overheard a young waitress at a restaurant express her desire to either be a missionary in Haiti or teach at a Christian school. Forty years after overhearing that conversation, the young waitress, Doris Plummer, is still at North Hills as director of the Academic Individualization and Modification program.

Dorthy-Jane Kozlowski shared the story of five children’s time as North Hills students. She said her family has been received with open arms, fellow students have befriended her children, coaches have instilled confidence, and teachers have prayed and cared for her children.

Plummer, the young waitress from 40 years ago, brought the evening to a close by asking guests to be part of a journey through the next 50 years. Sharing stories of students whose lives were dramatically changed, Plummer said the special qualities of North Hills Christian School include academic excellence, individual attention and extracurricular activity opportunities in a Christian environment.

As middle school children sang the final strains of a song of thanks, it didn’t seem to matter to guests that the power had never come back on. Renewed friendships and an appreciation for the school community provided all the energy necessary.

North Hills Christian School is a nondenominational college-preparatory Christian day school in Salisbury for students in junior kindergarten through high school. For more information, contact Jeannie Ogg, director of recruitment and retention, at Jogg@northhillschristian.com or 704-636-3005, Extension 109.

Nikki Eagle is director of marketing and communications for North Hills Christian School.

By Rebecca Rider rebecca.rider@salisburypost.com SPENCER — Students at North Rowan Elementary School are about to get a taste of how big... read more