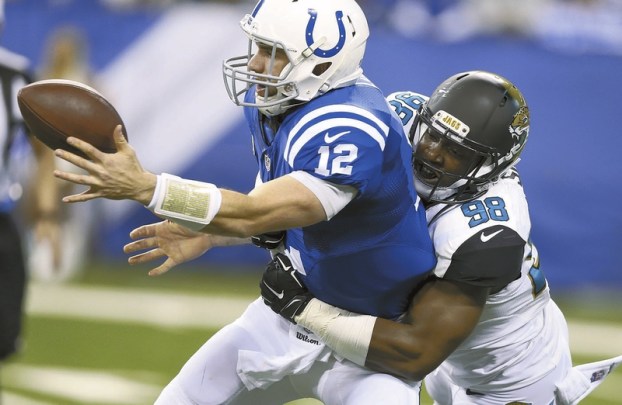 Three years ago, this was Chris Smith’s time.

All the dreams, all the work, all the prayer led up to May 10, 2014, the day the former West Rowan High phenom became a fifth-round draft pick by the Jacksonville Jaguars.

Since then, there have been  appearances in only 19 regular-season NFL games, peppered with 20 tackles, one YouTube forced fumble against Indianapolis’ Andrew Luck, 4.5 sacks and the occasional sack dance.

That modest production led to the Jaguars trading the 6-foot-1, 266-pound Smith to the Cincinnati Bengals on April 11.

“The trade surprised and shocked me,” Smith said. “But no hard feelings with the Jaguars. Obviously I wanted to play more than I did there, but I’m grateful they drafted me and gave me my first opportunity.”

Smith is unfailingly upbeat, optimistic and team-oriented, characteristics that have not only kept him in the league but made the Bengals want him. The Bengals didn’t give up much to get him,  a conditional draft pick in 2018 that probably will be a seventh-rounder, but it’s still a positive thing to have someone trade for you. It means they have plans that include you. Cincinnati was a below-average pass-rushing team last season, ranking 19th in the NFL,  and was willing to gamble that Smith, a pass-rushing specialist, can help address that shortcoming.

“The last few weeks have been like getting drafted all over again,” Smith said. “I feel like the new kid in school. I’m excited about showing what I can do.”

Smith headed to Cincinnati shortly after the trade for meetings with coaches such as defensive coordinator Paul Guenther and veteran defensive line coach Jacob Burney.

“They have a defense where the priority is always pressuring the quarterback,” Smith said. “I can get after the quarterback, so I should fit in great. I actually had my first career sack against the Bengals.  I’ve already reminded (the victim of that sack, Cincinnati QB) Andy Dalton about it.”

The Bengals were 6-9-1 last season, but they were a playoff team in 2015. This means a different dynamic for the 25-year-old Smith, who played on struggling, bungling Jacksonville squads that were 11-37. Those teams were annually attempting to sew the seeds for a rebuilding project. They were never serious contenders.

“That’s different in Cincinnati,” Smith said. “The fans are crazy, already fired up about the upcoming season. And there are a lot of veteran players here who know exactly what it takes to have a winning team.”

Smith has rented an apartment in Kentucky and is working out as he prepares for the start of the Bengals’ OTAs (Organized Team Activities) in late May and mini-camp in mid-June.

He’s learned a few things already. He had no clue how close Cincinnati was to Kentucky. He has a young daughter and a 1-year-old son and family considerations require long drives. He’s learned that Cincinnati is about a seven-hour drive from Charlotte and 10 hours from the University of Arkansas where he starred for the Razorbacks in college.

Smith also has discovered that Cincinnati fancies itself as the real ‘Queen City.”

“I’m not sure people in Charlotte would like that very much,” Smith said with a laugh.

Smith has plenty of time now to reflect on where it all started for him back at West Rowan. He thought his future was in basketball for a long time. He didn’t even play football as a high school freshman, but he made an instant impact when he took up the sport for coach Scott Young as a sophomore. Smith and unstoppable running back K.P. Parks spearheaded the first two of West’s three straight 3A state titles in 2008 and 2009. Smith made All-State teams. He had 16.5 sacks as a senior. He was on the winning side in his last 31  high school games. In the 2009 Shrine Bowl, Smith was named defensive MVP for the winning N.C. squad, while Parks was the offensive MVP, and West ruled the football world in North Carolina.

Smith was ranked as one of the top 25 players in North Carolina when he headed to Arkansas. He got playing time as a true freshman, started a few games as a sophomore and took his turn in the spotlight as a junior. He accounted for 18 sacks his last two seasons for the Razorbacks. As a senior, he was second team All-Southeastern Conference in the nation’s toughest league.

Then the Jaguars drafted him.

Smith has worked diligently in-season and off-season since that draft, but things have stayed quiet for him. There has been no breakout. There have been disappointing Sundays when he’s been on the inactive list even when he’s been healthy. There also have been injuries. He suffered a fractured cornea last season when he was accidentally poked in the eye at practice.

“That injury was so painful, so hurtful,” Smith said. “I didn’t miss that much time, but it definitely made me a  believer in wearing a visor.”

So Smith is at a crossroads. This season could be the springboard to another handsome contract and a nice career — or it could mean the end of the NFL road.

“I’m in a contract year,” Smith said. “This is a very important season. I’ve got a lot to prove to a lot of people.”

Cincinnati has two veteran defensive ends, 6-foot-6 and 6-foot-7 twin towers Michael Johnson, a veteran who crashed the NFL party when Smith was still in high school, and Carlos Dunlap, a Pro Bowler.

Behind those two, it’s a crowded, uncertain situation.  Cincinnati added to the throng of contenders for spots on the depth chart by using third-round and fourth-round picks this weekend on defensive ends with solid credentials — Kansas State’s Jordan Willis and Auburn’s Carl Lawson.

Cincinnati’s draft strategy wasn’t exactly a vote of confidence for Smith, but he’ll take it in stride like he does everything else. He’s always been that guy who will embrace new teammates for the betterment of his team.

“All I know is I’ve never been as excited about playing football as I am right now,” Smith said. “This is a fresh start.”