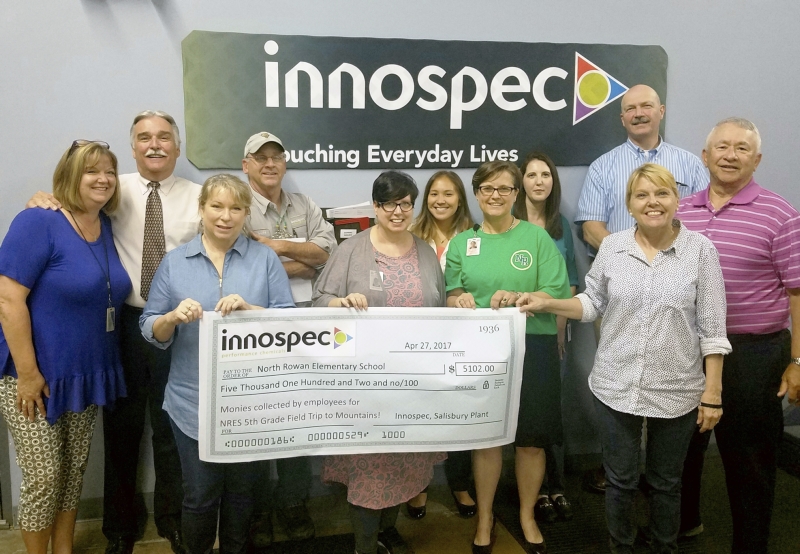 SPENCER — Students at North Rowan Elementary School are about to get a taste of how big the world really is.

On average, the school’s students stick close to home.

But Bryant is trying to change that. In two weeks, she’ll launch the first leg of a program that will take students across the state, east to west, by the time they leave for middle school.

“I wanted them to be able to see all of North Carolina,” she said.

When the program is up and running, fourth-grade students will visit Biltmore Estate, and fifth-graders will spend time at the Sound to Sea program in Bogue Banks. But this year, they’re starting simply with the fifth grade taking a trip to Biltmore.

It’s made possible thanks to employees at Innospec Performance Chemicals in Spencer. The company has partnered with North Rowan Elementary throughout the school year, donating supplies and painting the gym. When Innospec representatives asked Bryant what they could do next to help, Bryant had a list.

She told them about her goal to show students the state. Innospec told her to find out how much it would cost.

“We have gotten involved here and gotten really excited about it,” Barnhardt said.

The Spencer plant has donated to causes across Rowan County in the past year, but Barnhardt said she and co-worker John Struzick, manufacturing financial manager, have developed a soft spot for North Rowan Elementary and want to “adopt” the school.

Barnhardt and Struzick asked employees to donate from their own pockets. Under Innospec Cares, any amount up to $5,000 can be matched by the corporation.

Employees managed to raise $2,500. A high-level company official agreed to match the donation, as the corporate match won’t be up for approval until June. Barnhardt said Innospec plans to collect donations again next year. And should Innospec Cares approve the match, that money will likely be put toward next year’s trips.

On Thursday, Barnhardt, Struzick and plant employees presented Bryant with a check for $5,102.

That amount, along with money pitched in by the school itself, is enough to rent two charter buses and send 100 fifth-graders to Biltmore Estate with no cost to students or chaperones.

“When we talk about ‘it takes a village to raise a child,’ this is that exactly,” Bryant said.

Bryant said that traveling and seeing things they’re learning about really helps cement classroom lessons. It’s one thing to learn about an estuary and another to actually see it and understand.

“There’s a whole big world out there,” she said.