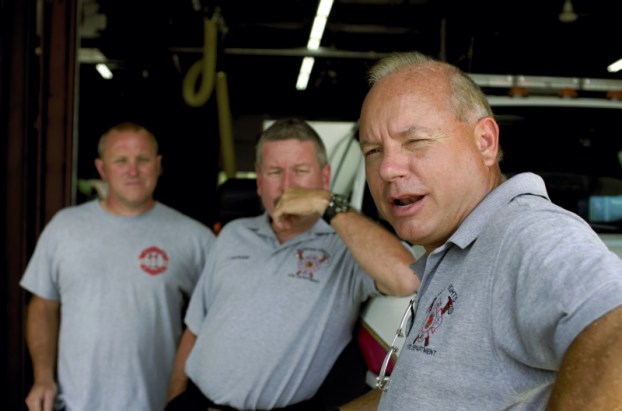 Firefighter Todd Bittle, left, and Captain Todd Overcash listen as Chief Mike Zimmerman talks about how he is proud of how they handled the situation when they both helped deliver a baby at a gas station on Friday at the Bostian Heights Fire Department in Salisbury. Kristi Craven/Salisbury Post

BOSTIAN HEIGHTS — There are some things in life that just won’t wait. Friday morning, a brand new baby boy was one of them.

His parents were en route to Carolina’s Medical Center NorthEast early in the morning when they were forced to pull into the parking lot of Sandy’s One Stop at Old Concord Road and U.S. 152. The mother was in the final stages of labor, propped up in the front seat of the car.

A call to 911 had paramedics on the way, but firefighters from Bostian Heights Fire Department — just across the road from the store — got there first. Capt. Todd Overcash said the dispatcher reported that the baby’s “head was presenting.”

Chief of Emergency Services Frank Thomason said the telecommunications operator stayed on the phone with the mother, giving pre-delivery instructions while help arrived.

Overcash, Capt. Chuck Haas and firefighter Todd Bittle arrived in time to see that the baby was indeed on its way into the world. The three focused on attending to the mother, who was still in the front seat of the car.

Bittle said he doesn’t remember seeing the baby’s father. He was too focused on attending to the mother, who was in tears. He told her to push.

Bittle and the telecommunications operator encouraged her to try. She did, and Bittle said the baby’s nose emerged. With some coaching from Overcash, he grabbed the baby’s head and tugged gently.

“And it just popped out in my arms,” he said.

It was a healthy baby boy. Overcash clamped the umbilical cord and let the baby’s father cut it.

Mike Zimmerman, Bostian Heights fire chief, said the department got the call at 6:54 a.m. The baby was born at 6:59 a.m.

Both firefighters said their predominant feeling was relief.

“When you hear that address close to the station, it really kind of messes with you,” Overcash said.

Usually, he and other firefighters use the drive to the call to prepare mentally. But with this call so close, there was nothing to do but act and trust that their training would carry them through.

“The time is now,” Overcash said. “It is coming. There’s nothing we can do to stop it.”

It’s the first time either of them has delivered a baby on a call, but they said that “OB emergencies” always make them a little nervous. Usually, there’s a lot of waiting and worrying about complications and other dangers. But in the case of this baby, they could act immediately.

Both are happy that the mother and child are safe and appeared healthy. By the time afternoon rolled around, the two were all smiles.

“I’ve been here almost 40 years and this is the first time I’ve ever experienced this,” Overcash said.

“You kind of get the thought, ‘Is this really happening?’” Bittle said.

The baby was named Axel, but Fire Chief Zimmerman joked that they should have asked the parents to name him Todd, since that’s the first name of both the firefighters who delivered him.

Firefighters go through a lot of training for OB emergencies, Zimmerman said, and Friday, it paid off.

“When you get there, it’s second nature,” he said.

Zimmerman was present but stood back and let his men work. He joked he was “there for moral support.”

Capt. Daniel Robinson and paramedic Summer Surratt with Rowan County EMS arrived and took the mother and baby to the hospital.