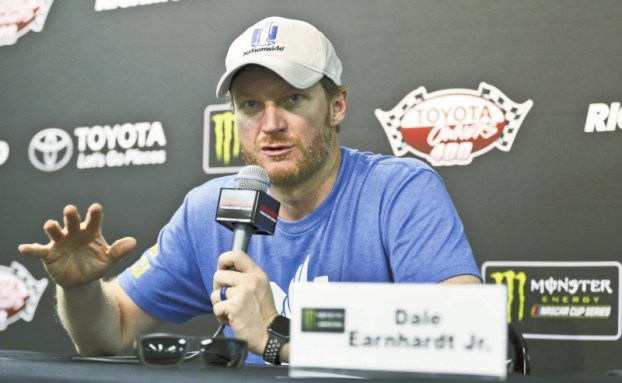 Dale Earnhardt Jr. gestures during a press conference after practice for Sunday's NASCAR Cup Series auto race at Richmond International Raceway in Richmond, Va., Friday, April 28, 2017. NASCAR'S most popular driver for each of the past 14 seasons, returns to the track for the first time since announcing that the 2017 season will be his last. (AP Photo/Steve Helber) Tabatha Wright, of Amelia, Va., displays a Dale Earnhardt Jr. flag as she waits for him to pass by during practice for Sunday’s NASCAR Cup Series auto race at Richmond International Raceway in Richmond, Va., Friday, April 28, 2017. NASCAR’S most popular driver for each of the past 14 seasons, returns to the track for the first time since announcing that the 2017 season will be his last. (AP Photo/Steve Helber)’

RICHMOND, Va. (AP) — Dale Earnhardt Jr. says the pressure is gone, not only about his future, but also his results.

“I certainly did feel a lot more relaxed now,” NASCAR’S most popular driver said Friday at Richmond International Raceway, where he came back to work three days after announcing that this season will be his last. “I don’t know whether it’s because I finally got to tell everybody and let everybody know what we’re doing, get that over with, but I certainly felt real relaxed today in the garage during practice.

“I felt like there was less pressure from somewhere, and a large amount,” he said. “A lot different.”

That doesn’t mean that Earnhardt won’t be trying to end a 27-race winless drought when the green flag drops Sunday.

“The fans are going to want you to do as best as you can, so they’re still going to have expectations, per usual,” he said. “The team, the guys, myself, we’d love to win some races. I’m going to say a race, but some races would be great going out in your last season to get some victories. We just want to go to Victory Lane one more time. Just to get that experience one more time would be awesome for me and I think the guys would love it.”

Earnhardt has struggled this season. He’s 24th in points through eight races and has finished 30th or lower four times.

In the past, if his car was balky in practice, there was tension.

Now, “I am not going to get so spun out if something is just not perfect on the car or the car is not exactly what we need or we are a little slow. I guess I won’t be as panicky about it and the frustration won’t jump in there as quickly as it usually does,” he said.

He compared his situation to that of former crew chief Steve Letarte, who knew he was retiring at the end of the 2014 season.

Earnhardt and Letarte won four races that season, his first multi-win season in a decade.

“He was more aggressive and I think it was because he had the freedom to be that way,” Earnhardt said, citing strategy calls by Letarte that allowed the team to win both races at Pocono that year despite not necessarily having the best car. “He was like ‘What if it doesn’t work?’ And a lot of times it ended up working out.”

Having announced his retirement plan has allowed him to begin talking to others about what options he might have to keep him busy next season. He’s even hired an agency to assist in that and in finding ways to expand his Xfinity Series program, JR Motorsports.

One of his drivers this year, 19-year-old rookie William Byron, is second to teammate Elliott Sadler in the points race after seven events, and has been mentioned as a possible replacement in Earnhardt’s No. 88 Chevrolet. But Byron said he’s not thinking about that yet.

“Every one of us wants to race in the Cup series. That’s the ultimate goal, so I’d be ready for anything, I think, but right now it’s just focusing on what I can do at JRM and see what we can do the rest of the year and hopefully compete for a championship,” he said.

Team owner Rick Hendrick has said he would like Earnhardt to remain involved in some capacity, and Earnhardt said he’s also enjoyed his opportunities to be part of race broadcasts and might like to do that more, or whatever allows him to remain an asset to the sport.

“Now I can have those conversations with the people that I really trust,” he said.

Earnhardt said during Tuesday’s press conference that he just wants to race and wasn’t comfortable with the idea of his last 28 races being accompanied by a ‘tribute tour,’ but joked that he’s now regretting that comment.

In reality, with NASCAR attendance in a downward spiral and television ratings following suit, the businessman in Earnhardt knows that tracks will milk his farewell tour for all it’s worth. Once he announced his plans on Tuesday, for example, Richmond began touting the race as the “last chance” to see Earnhardt run in a day race at the track.

His final visit to RIR, where he’s won three Cup races, will come Saturday, Sept. 9, in the last chance for drivers to make the playoffs.

“The tracks gotta do what they gotta do. None of that is going to rub me the wrong way,” he said. “I’m cool.”

By Steve Reed AP Sports Writer CHARLOTTE (AP) — General manager Dave Gettleman is doing everything he can to get... read more