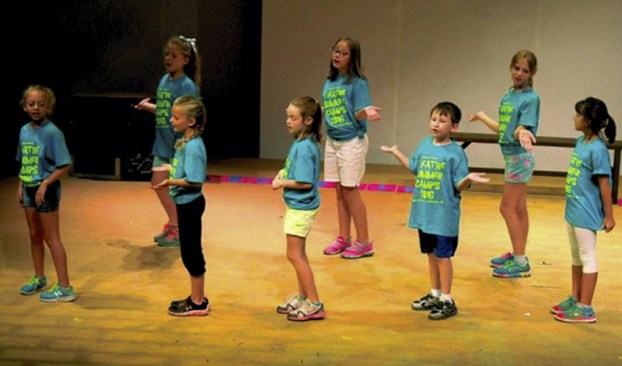 Age groups unless otherwise noted are:

Registration forms are available at the PPT offices, 213 S. Main St., or at piedmontplayers.com

Boxed lunch option: Sidewalk Deli offers pre-ordered box lunches at $5 a day that include fresh-made sandwich, side, dessert, drink and will be delivered to the theater. Menus will be sent with registration forms. Campers do not have to purchase lunch for every day; they can pick and choose daily. Lunch orders must be received before the first day of class to be guaranteed. Alternatively, campers maybring their own lunch.

Back by popular demand. Little ones want to have fun and do theatre too. Learn and express themselves through games and puzzles and learn basic acting and design skills. This camp will not have an end of the week program since the focus is not performance but fun and process. Instructor: Anne Cote Hoffman.

Create your own collaborative original show, complete with favorite popular songs. Brainstorm ideas for a short play. learn story-building, creative drama and role playing, as well as theatre-themed art projects. Prepare a mini-performance for family and friends on the last day of camp. Instructor: Caroline Stephenson.

For those that have taken Acting Up 1 and would like to continue to develop their skills. Acting Up 1 is required. Instructor: Anne Cote Hoffman.

Get in the holiday spirit with songs, dances and hilarious scenes from musicals like “Elf,” “A Christmas Story,” “White Christmas” and more. Fun and skill-building through creative drama games and activitiesg. Create daily art projects and prepare a mini-performance for family and friends on the last day of camp. Instructor: Caroline Stephenson.

A summer camp set in the N.C. mountains whose lake, when hit just right by the light of the full moon, causes a time portal to open. An original youth musical written by PPT youth musical director Laurie Klaus. See how a new youth musical is developed and workshopped, experience the process of making a new show come to life for the very first time. Instructor: Laurie Klaus.

“Hamilton,” “In The Heights,” “Moana”: just some of the works by Lin Manuel Miranda. Learn about the work of one of Broadway’s most innovative new artists while performing some of the most popular music in theatre. Instructor: Gwen Matthews.

Students create their very own dinosaur-themed mini-performance complete with songs and dances, inspired by favorite characters from “Dinosaur Train,” “The Good Dinosaur” and more. A daily pre-historic themed art project to take home and a dino-licious snack. Mini-performance for family and friends on the last day of camp. Instructor: Caroline Stephenson.

Work on developing audition material and strategies for successful musical auditions. A mini-performance for family and friends on the last day of camp features students singing songs learned throughout the week. Beginner-experienced students welcome.

A week for our youngest campers features songs, dances and creative drama activities from favorite Disney movies plus a daily themed art project to take home and a fun snack.

Each day will use a different set of characters and the week ends with a mini-performance for family and friends. Instructor: Caroline Stephenson.

This is a two-week intensive camp that will put together the production of “Aladdin” complete with costumes, props and a set. Learn choreography, music and scripts to the entire show. Instructor: Gwen Matthews.

*Campers must attend both weeks.

Learn the basics of costume and makeup design from concepts and sketching to sewing and fitting. Learn the importance of teamwork while meeting with the director and other designers to create a cohesive production.

Learn the basics of how clothes are made and altered, following patterns to create pieces and occasionally making simple patterns from scratch. At the end of two weeks you will have the chance to see your creation on stage.

• Gwen Matthews is excited to be joining us for her fifth season of Summer Theatre Camps. In addition to our summer camps, Gwen teaches PPT’s youth musical audition camps. She has also directed PPT’s productions of Disney’s “The Jungle Book KIDS,” “Honk Jr.,” “The Musical Adventures of Flat Stanley Jr.,” “The Little Mermaid,” “High School Musical,” “Disney’s TARZAN” and “The Wizard of Oz. “

• Caroline Stephenson holds an M.M. and B.M. in music performance from Winthrop University. For more than 10 years she has taught classes in creative drama, dance and music for Children’s Theatre of Charlotte, Matthews Playhouse, The Uwharrie Players and others, and directed, music directed and performed throughout N.C. and S.C.

This spring, she toured with Children’s Theatre of Charlotte in the world premiere of “Goldilocks and the Three Bears.”

She was awarded a 2017 Regional Artist Project Grant from the Arts & Science Council. Caroline is instructor of voice for musical theatre at Catawba College and is also on faculty at Central Piedmont Community College in the department of music.

• Anne Cote Hoffman has a BA in communication arts from Catawba College where she performed and volunteered with The Blue Masque and a MA in school counseling from UNC-Charlotte.

Anne has performed in many productions with Piedmont Players, St. Thomas Players and Lee Street Theater. As one of our original Drama Camp teachers, she helped build and expand the program to what it is today. She is thrilled to have been the first drama teacher of many of the young actors you see on The Norvell and Meroney stages.

• Laurie Klaus has served as music director for many Norvell Theatre productions, including “Elf Jr.,” “Tarzan,” “Junie B. Jones,” “Magic Tree House: Knight at Dawn,” and “The Little Mermaid.”

She has also enjoyed being pianist for many Norvell summer musical camps. A resident of Salisbury, she has been involved as music director, vocal director and keyboardist for theatrical productions throughout the region.

She has also worked with Flat Rock Playhouse and Busch Gardens, Williamsburg, Va. She holds a B.S. in Christian education/music and has continued her education at Catawba College and through mentors based in New York City.