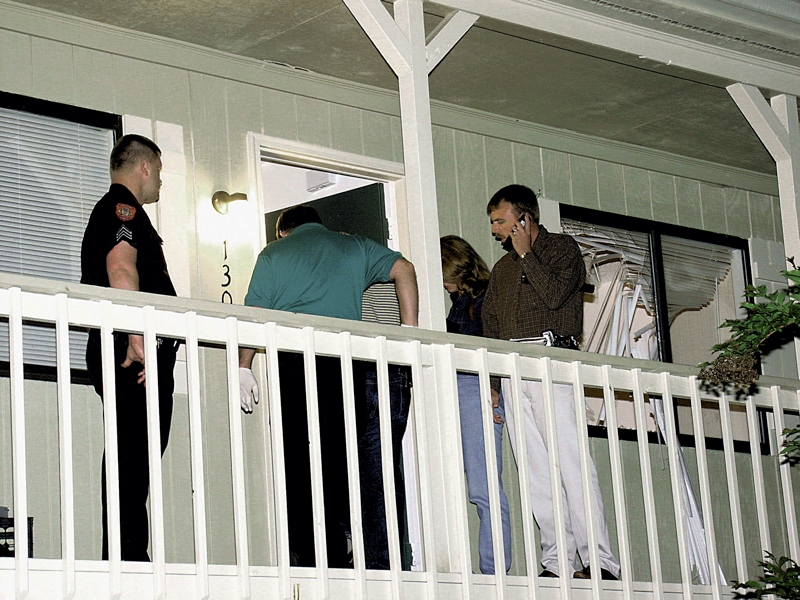 Police officers gather at the doorway of Apartment 1307 at Lakewood Apartments about 2 a.m. April 25, 2002, to investigate the shooting deaths of two Catawba College athletes. Photo by Jeff Gledhill/Salisbury Post file

SALISBURY — Twenty-one days after Zach Long’s 14th birthday, he was met with devastating news that would affect the rest of his life.

His brother, Walter Franklin Long V, had been shot to death in his Lakewood Apartment home along with a neighbor, Matthew Greear.

The murders were committed on April 25, 2002, and to this day, they remain unsolved.

Zach Long said his family is frustrated that his brother’s killers remain at large. The family went without any updates for years. Now, they hope that Salisbury police Detective Travis Shulenburger can bring some needed vigor to the investigation and will soon find out who killed Long and Greear.

Walter Long, 19, was a Catawba College football player who was on a scholarship before leaving the team after a back injury.

All four were in Long and Womble’s apartment at the time of the murders. Womble and Isaac escaped through bedroom windows.

Police at the time said the shootings were drug-related, a theory Zach Long disputes. Zach said a small amount of marijuana was found at the scene, not a large quantity of drugs. In Salisbury Post articles at the time, police investigators said they believed drugs were involved because of statements they had taken.

Police issued a description a few days after the murders saying they were looking for two black men. On was described as 6 feet tall, 175 to 180 pounds, and wearing a black hooded sweatshirt and black sweat pants. The second suspect was 6-foot-2 and 170 to 190 pounds. He wore a black hooded sweatshirt, black sweat pants and a black cloth over his face.

Detective Shulenberger said Thursday that those descriptions aren’t drastically different from recent descriptions given to police.

Police said in 2002 that Greear and Long were lounging on couches in the living room when someone knocked on the door. Greear answered the door and a brief exchange led to gunfire. A 2002 Post story says the two men walked inside. They said something, then fired a shot, striking Long in the head.

Long was taken to what was then Rowan Regional Medical Center — now Novant Health Rowan Medical Center — and died hours later. Greear, who was shot in the back of the head, died at the scene.

Moments after the shooting, Andrew Womble ran into a side bedroom and jumped out the window. He ran down some steps and took off through a patch of woods. He told police in 2002 that while he was running, he heard another gunshot. Police officers told the Post they believe the shot Womble heard was the one that killed Matthew Greear.

Womble burst through the Carriage Room bar, bloody and out of breath, telling employees that someone had shot his friend. He insisted to employees at the bar that he didn’t really know what had happened, reports said.

Chris Isaac said he ran into a bedroom and pushed up tight against the door. When he felt someone trying to push it open, he let go and jumped out the same window Womble had. Isaac ran into a wooded area and emerged only when he saw police lights. The bedroom window was just beside the front door facing a hallway leading to the stairs.

Zach Long said he’s felt as if the case has not been thoroughly investigated as it should have, but he is confident that Shulenburger will see the case through.

His father, Watt Long, had not kept up with the case in recent years but had done so in the early years after the murders. Zach Long said he has not waited for answers from authorities and has made his own inquiries with Womble and Isaac’s families. He believes Womble and Isaac know more than they have told investigators.

His mother can’t bring herself to talk about Walter’s murder, and Zach doesn’t bring it up to her. He has not told his family that he’s done some digging on his own.

Zach Long has offered to hire private investigators, but he says local investigators were told that the Police Department would not work with them.

Shulenburger said he has been working on the case alongside the SBI since he was assigned to it in 2011. He never considered this a cold case but an active investigation. He has reinterviewed Womble and Isaac, whom he considers his most valuable sources of information. Shulenburger has recently spoken with acquaintances of witnesses who lived in the area and went to school with the victims as well as former students at both Catawba and Livingstone colleges who lived at the complex in 2002.

People are scattered across the country, but that doesn’t mean the detective won’t travel out of state to follow a lead. He and SBI investigators have already traveled outside North Carolina for the case.

He’s spoken with people who knew Greear and Long and people of interest.

Some of the people who were investigating the case in its early days have since retired. Others, including primary Detective Mike Colvin, have been reassigned to other duties.

One of the key things under consideration, Shulenburger said, is submitting evidence for DNA testing. Technology has changed in 15 years, he said, and having some evidence submitted to the lab is an option.

Zach Long said he believes Shulenburger will continue to work hard on the case, but he and his family would like to hear more often from investigators about where they are in the case.

He believes Shulenburger is doing what he has to do.

“All unsolved homicides affect you. This is a case we really would like to clear,” Shulenburger said.

Anyone with information is asked to contact the Salisbury Police at 704-638-5333, Salisbury-Rowan Crime Stoppers at 1-866-638-5245 or online via http://tips.salisburyrowancrimestoppers.org/.

Kannapolis names 2017 Teacher of the Year