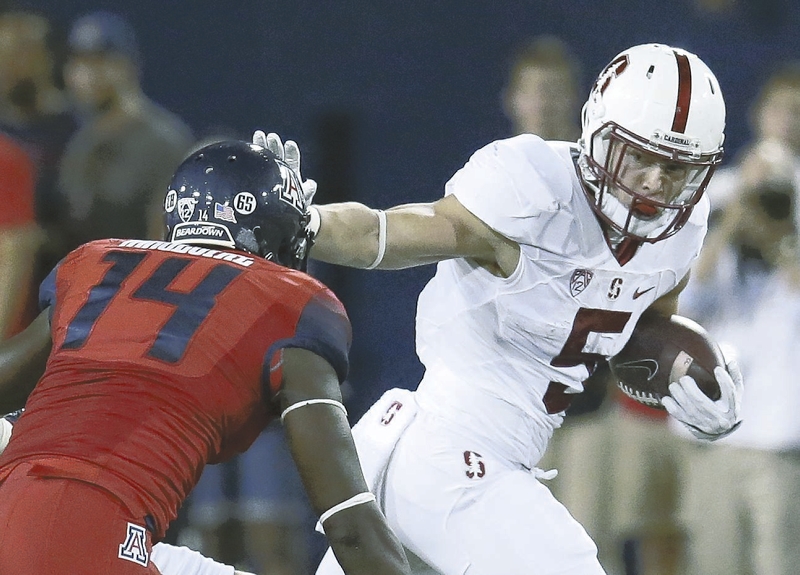 AP Photo/Rick Scuteri, File ... In this file photo, Stanford running back Christian McCaffrey (5) stiff-arms Arizona linebacker Paul Magloire Jr. during the first half of a game last Oct. 29, in Tucson, Ariz. McCaffrey was selected eighth overall by the Carolina Panthers at the NFL Draft, in Philadelphia, last night.

CHARLOTTE (AP) — The Panthers selected versatile running back Christian McCaffrey from Stanford with the No. 8 pick in the NFL draft, giving former league MVP Cam Newton some needed help on offense.

While some questions remain over McCaffrey’s ability to be an every down back in the NFL, he won’t have to fill that role in Carolina — at least not immediately.

Carolina’s offense took a step back last season after reaching the Super Bowl in 2015.

After combining for 45 touchdowns in 2015, Newton spent most of last season under duress, throwing 19 TD passes and 14 interceptions while completing a career-low 52.9 percent of his passes.

McCaffrey figures to help bolster that completion percentage by serving as an outlet for Newton on short slant routes and dump downs because of his abilities as a receiver. The Panthers were also last in the NFL in yards after the catch, an area the big play McCaffrey excelled at with Stanford.

This past season McCaffrey averaged 211.5 yards per game and led the Pac-12 with 1,639 yards rushing despite being hampered by an ankle injury. He averaged more than 30 touches per game over the past two seasons.

The younger McCaffrey has a knack for exploiting creases in the defensive with his shiftiness and explosive speed.

The Panthers have two selections in the second round and one in the third on Friday night.