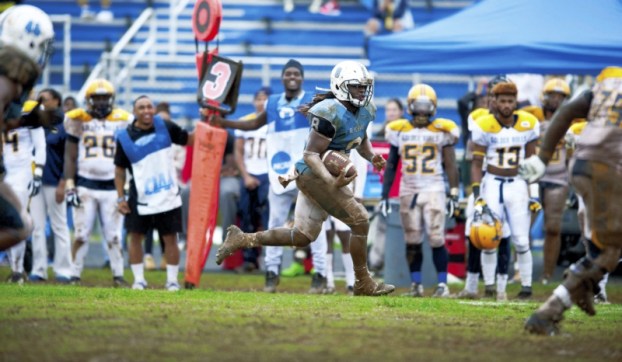 JON C. LAKEY / SALISBURY POST FILE PHOTO In a photo from Nov. 7, 2015, Livingstone’s DeMarcus Nolan (8) returns an interception 55 yards for a touchdown against J.C. Smith during the Blue Bears’ 35-12 victory. Nolan is hoping to land a chance with an NFL team. This time last year, Hargrave was on a lot of NFL teams’ radar, due to his stellar career as a nose tackle at FCS South Carolina State — and an outstanding showing at the NFL Combine in Indianapolis.

But there was still some mystery for Hargrave when the draft began and he had to wait until the second day before being selected in the third round by the Steelers.

Nolan faces much bigger odds. Playing at Division II Livingstone, Nolan had two strong seasons after transferring from Arkansas Baptist Junior College, but was pretty much an unknown as 2016 was coming to a close.

Nolan, a 6-1, 200-pound linebacker/safety, does not expect to be drafted. His agent, Mimi Alvarez, is also realistic about that fact, as is Emerson Martin, a former NFL player and Raleigh resident who has overseen Nolan’s training.

All three are hoping, maybe even expecting Nolan to be invited to a camp as a free agent signee.

That’s all he is hoping for, or even dreaming about — a chance.

Nolan was one of several Division II players selected for the FCS Bowl in Daytona, Fla., last December 4. He made four tackles, three assists and had a pass break-up.

That performance maybe doesn’t sound like huge news, but the fact that it came against FCS-level players, it gained Nolan some attention — enough notice to be invited to the NFL Regional Combine in New Orleans on March 11 and the “pro day” at S.C. State on April 6.

“Between the combine and the pro day, DeMarcus improved everything that he participated in,” said Martin, an original Carolina Panther in 1995. “Anytime that you improve your numbers on your workouts … it’s a good thing. No one stays the same, it’s either better or worse and he got better. That shows his work ethic. And he should continue to get better as he gets more and more used to those type drills. There is so much more for him to learn.”

With the combine and pro day behind him, Nolan continues to work out while finishing up the spring semester at Livingstone. He is scheduled to graduate in December with a degree in business administration. Unless, that is, football gives him a reason not to be in Salisbury.

“Everything is going good,” said Nolan. “I’m just waiting to see if any team gets back in contact with my agent. I’m pretty confident that I’ll get a chance to show what I can do as a free agent and all that happens after the draft is over this weekend. We’ll go from there.”

Martin, who was an offensive lineman coming out of then Division II Hampton, signed as a free agent with Kansas City before ending up at Carolina and then Pittsburgh. He knows how the NFL works.

“It depends on where you go,” said Martin. “Some organizations will pay more attention to their draft picks, but some will not hesitate to cut a guy with guaranteed money. The NFL can be a funny place. You have to go to a place where they like you and are going to give you a serious opportunity. Sometimes, it’s not about being the best, but being in the right place at the right time.

“I believe that once DeMarcus gets an opportunity, he can make a roster, because is a very good athlete,” continued Martin. “He is a lot faster on the field than he is on the clock and teams have seen this now.”

Martin said Nolan has been training to play strong safety, as that postion has become somewhat of a “tweener” with a linebacker, which he played in college.

“He has the speed to play strong safety and of course, he can make an impact as a special teams player,” added Martin.

“On the field, he’s always ready to hit somebody and is a sure tackler,” Livingstone head coach Daryl Williams said, after a game last season. “Off the field, he’s a good role model and good student — on track to graduate. He’s 100 percent into the program.”

He went home to Knoxville over Easter to see his father, Nolan Sr., who is a barber. Nolan’s mother, Teresa Ligon, died in 2014 at the young age of 41.

“All my family in Knoxville is excited for me,” said Nolan. “That’s all they wanted to talk about, asking me if I was ready. I told them, ‘yes, I am.’

“I did pretty good at the regional combine and even better at the pro day,” continued Nolan, who didn’t want to name any teams that have talked with him. “I have a pretty good feeling about a few teams, so I’m just hoping for a chance. Anywhere I need to go and any position they want me to play, I’ll do it.”

Martin is confident that Nolan will get some type of opportunity.

“Because DeMarcus is such a great athlete, I think he can be a great asset for a team,” said Martin. “He was an unknown, but he did well at the FCS Bowl game, which was a division up from where he played in college. He caught the eyes of a couple of scouts there and because of that, there’s an intrigue of what he can do.”