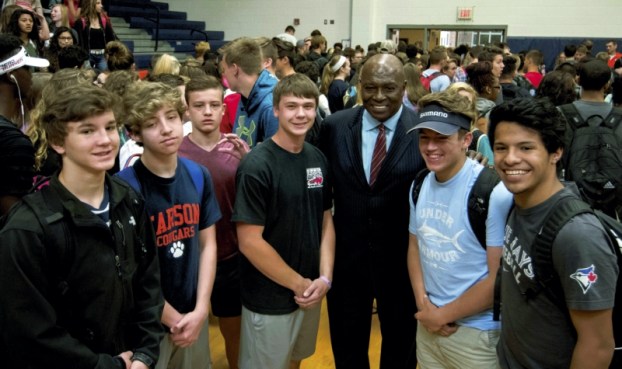 Game Plan for Life hopes to teach by example

CHINA GROVE — It’s the week before prom at Jesse C. Carson High School, and students are being asked to think critically about how their decisions affect their futures.

On Wednesday morning, juniors and seniors watched a simulation of an alcohol-induced wreck, while freshmen and sophomores went to the gym to hear a presentation from Game Plan for Life, a nonprofit group that encourages students to make good decisions.

Principal Angelo DelliSanti said the programs are annual features at the school, but it’s just chance that they both fell during prom week this year. While faculty and staff members at Carson discuss good decision-making and avoiding drugs and alcohol throughout the year, the programs have a visceral impact on students, he said.

“It makes it real for them,” he said.

Students come to school to learn math, English and science, but faculty and staff hope that students also will pick up some life lessons, as well.

If the programs help five students, he said, the effort is worth it.

Game Plan for Life brings motivational speakers into schools to discourage underage drinking and share stories about handling and overcoming adversity. The Rowan/Kannapolis ABC Board, Rowan County Sheriff’s Office and Salisbury Police Department work together to bring the program to Rowan-Salisbury Schools.

In the fall, Game Plan for Life toured local middle schools. This week, the program is doing the rounds at the county high schools.

Terry Osborne, chief executive officer and general manager of the Rowan/Kannapolis Alcoholic Beverage Control Board, said there have been “some very powerful moments” so far.

Wednesday’s speakers were Phil Ford, an Olympic gold medalist and former star basketball player for the University of North Carolina at Chapel Hill, and Al Wood, also a former Tar Heel who who went on to play in the NBA.

Ford asked students to think about how their decisions will play out in the grand scheme of their lives. When most people drink alcohol, he said, they’re thinking only about the immediate laughter and fun; they’re not looking toward the future.

Drinking can lead to fatal car accidents, broken relationships, lost careers and alcoholism. And once you become an alcoholic, Ford said, you’re stuck that way.

“Once you become a pickle, you can’t go back. … It’s not like you can take a pill or reverse it. You have to deal with it the rest of your adult life,” he said.

Wood shared a personal story about his mother, who struggled with alcoholism. One day, he said, his mother got blackout drunk and stabbed someone. When he grew older, he fell prey to the same addiction. He didn’t decide to change until his 3-year-old son gave him an old photo of him playing basketball. Advertisements for liquor bottles were pasted over the picture.

“I promise you it could happen to you,” he said.

Wood and Ford encouraged students to pick their friends carefully because those relationships have an impact on their future and who they grow up to be.

And above all, they encouraged students to learn by example.

“We don’t want it to happen to you,” Wood said. “Allow us to be the examples.”