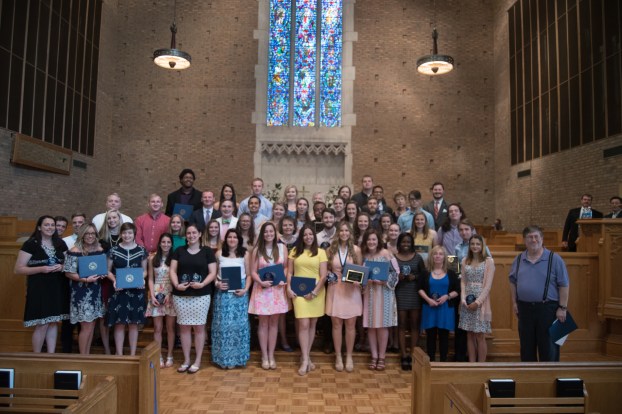 Student Government Association officers who will serve for the 2017-18 academic year were recognized, including secretary Adna Music of Salisbury.

Ricky Joines, a member of the athletics department staff, received the Kenneth Clapp Tri-Delta Award. Established by the Class of 2000 in recognition of the work of Ken Clapp, Catawba’s senior vice president and chaplain, the award is presented annually to a member of the faculty or staff who demonstrates dedication, devotion and dependability.

Seventeen inductees into Who’s Who Among Students in American Universities and Colleges were announced. Nominated by members of the college community and selected by a committee of faculty and students, these students are active leaders and scholars on campus. They include Justin Michael Burroughs, Lauren Elizabeth Gaskill, Michael Wayne Jones, Kaetlyn Marie McNabb, and Sara Kay Sellers, all of Salisbury; Steven Edward Porter of Concord; and Madison Taylor Sides of Kannapolis.

The President’s Award for Community Service was presented to Darin Spencer, an assistant professor of accounting. The award is given annually to a member of the campus community who has distinguished himself in service to Rowan County-Salisbury community. The recipient is selected through nominations from the faculty and staff with the final selection made by the college president.

Members of Catawba’s team who participated in the N.C. Independent Colleges and Universities Ethics Bowl this year were recognized with certificates of appreciation. Norris Feeney, an assistant professor of politics, coached the Catawba team and also served as the coordinator for the team.

Elizabeth Smith of Salisbury and Cole Middleton of Lexington were co-recipients of the Sherrill and Smith Award in Business Administration. This award is given annually by the partners of Sherrill and Smith to the senior in the Ralph W. Ketner School of Business who achieves the best scholastic average during the year.

Mitchell Croot of Rockwell received the Rebecca H. Frantz Essay Prize. It is given by an alumnus, Edwin Nance of Altoona, Pennsylvania, in memory of the mother of three former Catawba College students. It is awarded annually to the writer of an essay judged by faculty to be the most original.

Sara Sellers of Salisbury received the Bethany and Aidan Sinnott Poetry Award. It was established by the English department in honor of Bethany Sinnott and in memory of Aidan Sinnott. The award is given to the student who demonstrates the greatest potential as a poet, based on a portfolio of his or her work.

Heather Duncan of Salisbury was awarded the Martha H. Morehead Award for the outstanding single work, poem, short story or graphic contribution, to the “Arrowhead” during the year with the selection made by the English department. The award is given annually to honor the late Martha Morehead, professor of English, whose nurturing of the arts at Catawba College was vital to the “Arrowhead’s” success.

The Elisabeth Scranton History Award was presented to Mitchell Croot of Rockwell. It is given in honor of a former professor of history to the student who has attained the highest academic average during the senior year and who represents the ideals of liberal scholarship in the area of history.

Justin Burroughs of Salisbury was presented the Chemistry Prize. This award is given annually to a student selected by the chemistry faculty to recognize good character, overall scholarship and excellence in chemistry course work.

Dominique Karriker of Salisbury was one of the recipients of the Mathematics Award. This award is presented annually by the mathematics faculty to a student who has demonstrated outstanding ability, scholarship and interest in math.

Lauren Gaskill of Salisbury was a recipient of the Shirley L. Haworth Prospective Teacher Award. It is presented to a senior with a 3.0 grade point average or better who majors or minors in education and who has demonstrated outstanding potential as a teacher based on observation in a classroom setting by faculty andteachers. The recipient is chosen by the department of teacher education faculty.

The Algernon Sydney Sullivan Award was given to Thomas Goodwin of Concord and Darin Spencer, an assistant professor of accounting. A committee of students and faculty choose both a student and a staff member annually to receive this award. It recognizes spiritual qualities practically applied to daily life with the belief that the recipients will uphold the spiritual standards of Catawba. The award was established by the New York Southern Society to honor the life of its first president, Algernon Sydney Sullivan.

Catawba’s 2016-17 Staff Member of the Year Award is the director of career services, Robin Perry. This award is presented annually, and the selection is made by a popular vote of the students.

Darin Spencer was selected as Professor of the Year for 2016-17. The recipient, who is chosen by a popular vote of the students, is recognized for classroom rapport, evidence of concern for students, and intellectual stimulation.

Jane Snider, an administrative assistant in the teacher education department, was honored as the recipient of the Louise Tucker Staff Council Award. The award is given to a staff member who demonstrates outstanding work ethic and performance, with nominations made by members of the faculty and staff and the recipient selected by a vote of the Staff Council.

The President’s Award for Staff Excellence was presented to Richard Darr, director of process improvement in the information technology department. The award is given annually to a member of the college staff who has distinguished himself in job performance and who has contributed to strengthening of community spirit on campus. The recipient is selected through nominations from the faculty and staff, with a final selection by the college president.

Carmony Hartwig, assistant professor of biology, was the recipient of the Swink Prize as Outstanding Classroom Teacher. The award is given by the Faculty Senate to a member of the faculty judged to be an outstanding classroom teacher. The award was created by a gift from the late Hearne Swink, former Rowan County resident and an official with Cannon Mills Co.

Janice Fuller, a professor of English and Catawba’s writer-in-residence, was the recipient of the Trustee Award for Outstanding Contribution. It was presented to her by board of trustees Chairwoman Darlene Ball. The award is given annually. The recipient is recommended by the Faculty Senate and endorsed by the board of trustees’ Governance Committee.

The recipients of the Whitener Medals were announced at the awards convocation but will receive their awards during Catawba’s May 13 graduation exercise. They are Anna Fields of Fairview and Justin Burroughs of Salisbury. Named in honor of the late Edgar Whitener of High Point, who served as president of the Catawba board of trustees from 1925 to 1944, the awards are presented annually to the man and woman in the graduating class who exhibit good character, leadership and scholarship. Selection is made by the faculty from the three men and three women who have received the highest number of votes in an election in which only members of the junior and senior classes may vote.