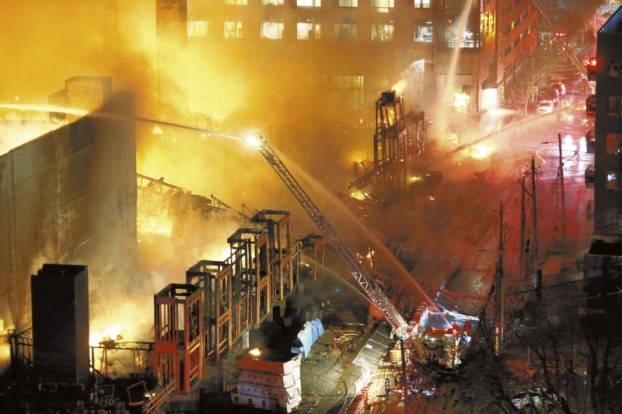 Firefighters battle a five-alarm fire burning an apartment building and surrounding structures in downtown Raleigh on March 16. The wood-framed building was under construction. Photo by Chis Seward/News & Observer via AP

Starling Johnson: ‘Cheaper’ can be costly When is cheaper not really cheaper?

Johnson Concrete Co. is thankful that no person was injured or killed in the recent five-alarm fire at The Metropolitan apartment complex in Raleigh.

We Carolinians were lucky, but we are not alone. A small sampling of other recent and massive wood-framed apartment fires:

In 2009, The National Fire Protection Association issued a warning to firefighters that buildings made with trusses and engineered wood could fail and collapse more quickly than other types of buildings in a fire. If part of a truss — small pieces of wood held in place with metal plates — fails, the rest falls quickly.

Authorities have indicated in reports that the Raleigh building had passed inspections up to 50 times prior to the blaze, while noting the project was in an especially vulnerable state during construction because the sprinkler system had not yet been installed. If multi-storied wood-framed complexes are “extremely vulnerable” to fire, why are they allowed to be built with such volatile materials?

The disadvantage of wood-framed buildings is obvious: wood burns. In this case, wood burned $12 million worth of property and damaged 10 nearby buildings, five of which were “severely damaged” in the incident.

The inherent risk in constructing multi-unit mid-rise dwellings out of glorified kindling is disconcerting to many, considering that alternative, non-combustible, fire-resistive materials are readily available for use as the primary structural system.

Some may say that designers and builders have mitigated the risk of fire by installing sprinkler systems. According to the National Fire Protection Association, however, the operating efficacy of sprinklers in fires large enough to activate them is only 87 percent. Conversely, the sprinkler systems in 13 percent of the wood-framed apartments that now populate our metropolitan areas will fail in the event of another massive fire.

Imagine a scenario where a complex is fully occupied during such a fire where the sprinkler system fails. We are now potentially facing an event and loss of truly epic proportions.

As published photos and videos confirm, the only structures to survive the Metropolitan apartment fire were the stair and elevator shafts built of concrete masonry. Imagine if this same apartment complex had been framed with concrete instead of wood: the fire would have been contained, the building would likely have not been fully decimated, and neighboring buildings would most certainly have not been impacted.

Where are our code officials and regulators?

Perhaps it is time for our building and code officials to recognize the risks imposed by wood multi-family construction and implement standards that protect property and human life. Good risk management would advocate building standards that require fire-resistive materials with proven fire separation benefits.

The number of recent fires calls into question whether initial cost savings from the cheaper combustible construction is worth the risks. We at Johnson Concrete stand behind masonry and “count on concrete” to do the job when it comes to fire safety.