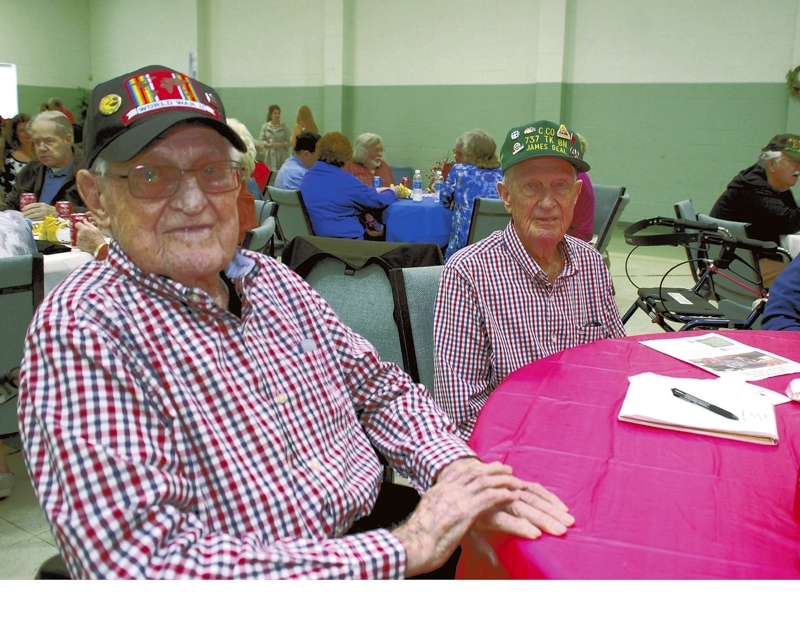 Levi 'Lee' Deal, left, and his brother, Jim Deal, had lunch together Tuesday at the Veterans Appreciation Day in Rockwell. The brothers, 99 and 94, respectively, served in World War II. Mark Wineka/Salisbury Post

ROCKWELL — It’s always a pleasure to see Jim Deal, and I run into him a lot.

I talked with him briefly at last year’s Woodleaf Tomato Festival. I’ve seen him at the Faith Fourth of July celebration. We first met several years ago at an annual reunion of the 737th Tank Battalion from World War II — a group that’s having its 70th reunion later this summer.

Jim was a gunner on one of the battalion’s Sherman tanks, nicknamed “Patton’s Spearheaders.” Gen. George S. Patton famously lauded the battalion’s assault crossings of the Sauer and the Rhine and swore his men and their tanks had webbed feet.

I happened to see Jim Deal again Tuesday over lunch at Veterans Appreciation Day in Rockwell. But there was a bonus: Chowing down on hot dogs with Jim was his brother Levi “Lee” Deal of Kernersville.

The Deal brothers don’t shy away from talking about age and why their particular branch of the Deal clan has lived so long.

“Tell him we have clean living in our family,” Lee told Jim in a relay message to me.

“He knows we have good genes,” Jim answered.

“We never run around, smoked, chewed tobacco — and there’s something else I say, what is it?”

Lee looked over to his daughter LeAnn Finison for help in completing that thought. Maybe it was that the Deals are not big drinkers.

Jim is 94. They were the youngest of Charlie and Maggie Deal’s 12 children (eight girls and four boys), and that was the main reason they both served in World War II — they just happened to be the right age.

Their great-grandfather Levi fought for the Confederacy in the Civil War.

Carl, the oldest brother, lived to be 102, but he just missed having to serve in World War I.

The Deals grew up on a farm in Woodleaf, and there must have been something in the water they drank or the tomatoes they ate.

Their parents  lived a long time — Charlie until he was 97; Maggie, 95. All of Lee and Jim’s siblings, except two, lived into their 90s, and two of them, including Carl, lived past 100.

Of the two Deal children who did not reach 90, one died in an accident; the other, of breast cancer.

Jim said he and Lee get together at least three or four times a year. Last October, they traveled to the World War II Memorial in Washington. The VFW paid for their trip and a two-night stay.

Jim speaks proudly of how they were able to visit the memorial during the daytime, then take it in again the same night.

During the war, Lee Deal served in the field artillery in North Africa and Italy. His niece, Melissa Waller, said the Army used Lee as a guinea pig at the end of the war, testing him and others in his unit to see how long they could last in subzero temperatures in the mountains.

“They were trying to see how much cold he could take,” Jim said in disgust. “It was terrible.”

Lee suffered severe frostbite on one of his legs and also was subjected to shock treatment, according to Waller. Only within the past decade was Lee rightfully compensated by the government.

He was hospitalized after the war — Jim said his brother also was suffering from shell shock — and Lee came home in a hospital ship. The Army discharged him with a 100 percent disability.

Back home, Lee Deal went through some training and became a good mechanic, even with his disability.

“I didn’t think I was qualified to be a mechanic,” Lee said, looking back. “I had to stop and sit a good bit. I didn’t rush through anything I did in my training. I went day to day.”

Even sitting down, Lee could do his brake work faster than anyone else.

Lee found work as a Plymouth/Dodge mechanic in Atlanta, then later moved his young family back to Greensboro to be closer to home. Jim said his brother would report to a VA hospital monthly for checkups, and over the years his disability was reduced from 100 percent to 10 percent.

Lee and his late wife, Nolvice, had two daughters. He had married Nolvice before heading off to war.

Lee went on to work for the post office. When he retired, he really didn’t. He started working as a maintenance man for the Masonic home in Greensboro, and he was counted on to repair everything from window air-conditioners to toilets.

He enjoyed the job and worked for the home into his 80s, the age of most of the residents, Le Ann said.

About five years ago, both of Lee’s legs were amputated, at least partly due to the severe frostbite he suffered with the Army in Italy.

Jim Deal always has been impressed with his brother’s lung capacity. He likes to say Lee could blow up a truck tire with his own breath.

Jim worked 34 years for Southern Railway. Most of those years were at the repair shops in Spencer; the last two, at Linwood Yard. He finds it a little hard to believe himself, but he worked 34 years and now has been retired 34 years.

“That must be some kind of record,” Jim said.

In the war, Jim was wounded in the legs by a land mine’s shrapnel.

Today, he is a lieutenant colonel at Fort Bragg, serving as a battalion commander and helicopter pilot with the 160th Special Ops.

You can tell, Lee Deal is quite proud of his lieutenant colonel grandson.

For a moment at Tuesday’s lunch, someone with a microphone singled out Lee and Jim and told them to make themselves visible to the rest of the crowd.

The brothers took off their Army ball caps and waved them high above their heads.

I swear, they looked young again.