Junior will leave a big seat to fill in No. 88 next season 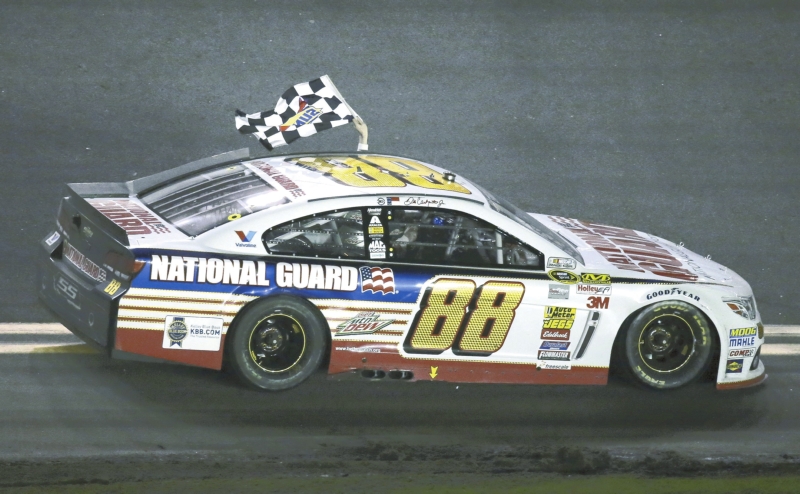 FILE - In this Feb. 23, 2014, file photo, Dale Earnhardt Jr. drives in front of fans in the grandstands waving the checkered flag after winning the Daytona 500 NASCAR Sprint Cup Series auto race at Daytona International Speedway in Daytona Beach, Fla. Earnhardt Jr. abruptly announced his retirement at the end of the season Tuesday, April 25, 2017, a decision that will cost NASCAR its most popular driver as the series scrambles to rebuild its fan base. (AP Photo/John Raoux, File)

Junior’s job is up for grabs.

Dale Earnhardt Jr.’s surprise decision to retire from the NASCAR Cup series at the end of the season will surely make his No. 88 Chevrolet the hottest ride in racing. But more than talent is needed to take the wheel for team owner Rick Hendrick.

The next driver will face added scrutiny that comes with replacing NASCAR’s most popular driver, the sport’s public face and a peerless pitchman who has done it all with few complaints over 18 years.

Earnhardt might never have won a NASCAR championship, but he did win the Daytona 500 twice, along with 24 other Cup victories, and plenty will be, yes, riding on the decision.

Hendrick said Tuesday the next 88 driver was not up for discussion right away, and the immediate priority was simply getting through the emotional day.

“We’ll take some time to decide what to do there,” Hendrick said.

Hendrick has promising drivers in the pipeline and any of them could earn a quick promotion to the Cup series. There are potential veteran free agents to court and maybe even a surprise candidate or two that might fit with one of the premier organizations in NASCAR.

Hendrick has the checkbook to buy out anyone he wants, though he has to keep his sponsors happy and, he hopes, paying the same top dollar that Earnhardt commanded.

A vote of confidence from Hendrick driver Jimmie Johnson, a seven-time champion, would go a long way. Chase Elliott is in his second full season in the No. 24 and Kasey Kahne, one of NASCAR’s biggest underachievers, faces an uncertain future. Hendrick could have a vastly different lineup in 2019.

But let’s try. Some possibilities:

Bowman was stout as a substitute last season when Earnhardt was sidelined with a concussion. He made 10 starts in the 88 Chevrolet, won a pole at Phoenix and had three top-fives. He made nine starts in the second-tier Xfinity Series for Earnhardt’s JR Motorsports team and has five top-fives in 50 career starts. Bowman has experience with Hendrick, trust with Earnhardt and success in his first major shot with an established team. He has not competed in a NASCAR Cup or Xfinity race this season and is waiting for his next opportunity.

Byron is considered one of the future top drivers in the Cup series and Hendrick has never shied away from plucking young prospects and plopping them in a Cup ride. Byron won seven races in the Truck Series last season and landed a full season ride with JR Motorsports in the Xfinity Series. Hendrick owns a stake in Junior’s Xfinity team. Byron also has solid sponsorship with Axalta and could bring that cash infusion to Cup.

The question looms, why rush? But the answer is simple: Why wait?

Bowman and Byron could both join Hendrick if the organization decides to move on from Kahne.

Absence makes the rumors grow stronger. Edwards abruptly retired at the start of this year, for reasons no one fully understands just yet. Some believe the hit he took in a late accident in the season finale, coupled with Earnhardt’s health scares, pushed Edwards into a hasty decision. Others have assumed Edwards has had his eye on Earnhardt’s seat — or another big ride — all along.  Edwards has refused to use the word “retirement” and could simply hit the refresh button on his career and make the jump to Hendrick.

— Matt Kenseth. He could be available, and a midweek sponsor announcement last week had many wondering if he was about to announce his retirement. He didn’t, and wants to continue driving, but they are running out of room at Joe Gibbs Racing.

— Kyle Larson. There’s no question Hendrick would take the current Cup points leader if he can get him, but Larson is in early stages of a new contract with Chip Ganassi. Even if Ganassi wanted the buyout cash, Larson may not want to go anywhere: He’s running well, he’s loyal and sticking with Ganassi could get him into the Indianapolis 500 next season.

— Greg Biffle or Justin Allgaier . If Hendrick wanted to give Byron at least another year at Xfinity, a stopgap veteran driver such as either of these two could keep the 88 seat warm until 2019.

Notable achievements in the driving career of Dale Earnhardt Jr. Hendrick Motorsports announced Tuesday that Earnhardt will be retiring at the end of the season.

1998: Wins the Busch Grand National Series points championship for the first time at the age 24.

2000: Earns his first Winston Cup victory at DirecTV 500 in Fort Worth, Texas. The victory came in just his 12th career Winston Cup start.

2001: In the first race held at Daytona International Speedway since his father was killed in a crash on the final lap of the Daytona 500, Earnhardt Jr. wins the Pepsi 400. He jumps to the hood of his car after the race, throws his fists in the air and then hugs 2001 Daytona 500 champion and Dale Earnhardt Inc. teammate Michael Waltrip.

2001: In the first NASCAR event since the 9/11 attacks, Earnhardt wins the Cal Ripken Jr. 400 at Dover, Delaware. He carries a large American flag during his victory lap.

2004: Earns his first Daytona 500 title exactly six years to the day after his father’s lone Daytona 500 championship. One of his career-high six titles that season.

2004: Wins an October race at Talladega but gets fined $10,000 and is docked 25 points for swearing during an NBC interview after the race. Penalty drops him out of the lead in the points race at the time.

2007: Announces he is moving from Dale Earnhardt Inc. to Hendrick Motorsports, effective in 2008.

2008: Ends a 76-race title drought by winning at Michigan International Speedway when he goes the final 55 laps without stopping for gas.

2012: Ends another long drought at Michigan again when he earns his first Sprint Cup victory since 2008. He had gone 143 races without a title.

2014: Captures his second Daytona 500 title in a race that included a rain delay lasting 6 hours, 22 minutes. Launches a comeback year in which Earnhardt also records season sweep at Pocono Raceway (also launches Twitter account that now has over 2 million followers).

2015: Wins the Coke Zero 400 in another rain-delayed race at Daytona for his 10th career victory on a restrictor-plate track. He would earn his 26th – and most recent – career victory later that year in Phoenix.